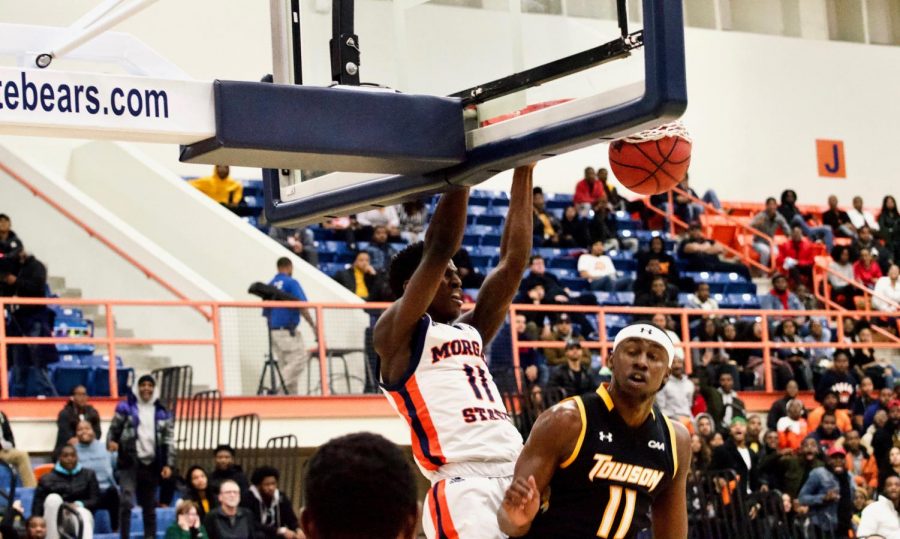 The highly anticipated rivalry game between the Morgan State Bears and the Towson Tigers ended in the Bear’s defeat on Wednesday night in the Hill Field House, 76-61.

With an aggressively fast pace start, the teams were evenly matched with six lead changes and four ties, until Towson went on a 7-0 run with less than one minute left in the first half.

“It’s hard to live with when you’re driving down the middle and you just give the ball away,” head coach Kevin Broadus said as he explained how the unforced turnovers hurt the team the most.

Not only did Morgan lose the turnover battle, but they also didn’t secure enough rebounds compared to Towson who grabbed 34. With a score of 39-32 by halftime, Morgan’s opponent opened the next period with an 11-0 run.

After a mid-range jumper from guard Sherwyn Devonish-Prince, the lead was cut down to nine, which created an opportunity for the offensive. However, it wasn’t enough to slow down the Towson Tigers.

“Once we went on that run, we had to keep our foot on the gas but as you can see—we didn’t,” Devonish-Prince said, who rallied the crowded in the second half.

Prince, who accumulated a double-digit score by the end of the game, finished with 11 points, one assist and three rebounds.

Although Towson didn’t lose the lead in the second half, the teams exchanged momentum up and down the court. However, it wasn’t enough to carry the Bears over the hump and Towson found opportunities to score at the free-throw line throughout the game.

“Our guys didn’t come out to play in the second half,” Broadus said.

The undefeated Towson Tigers (4-4) finished the game with four scorers in the double digits and shot 23-30 from the free-throw line.