Morgan State's pool in the Hurt Gymnasium has been without water since July. 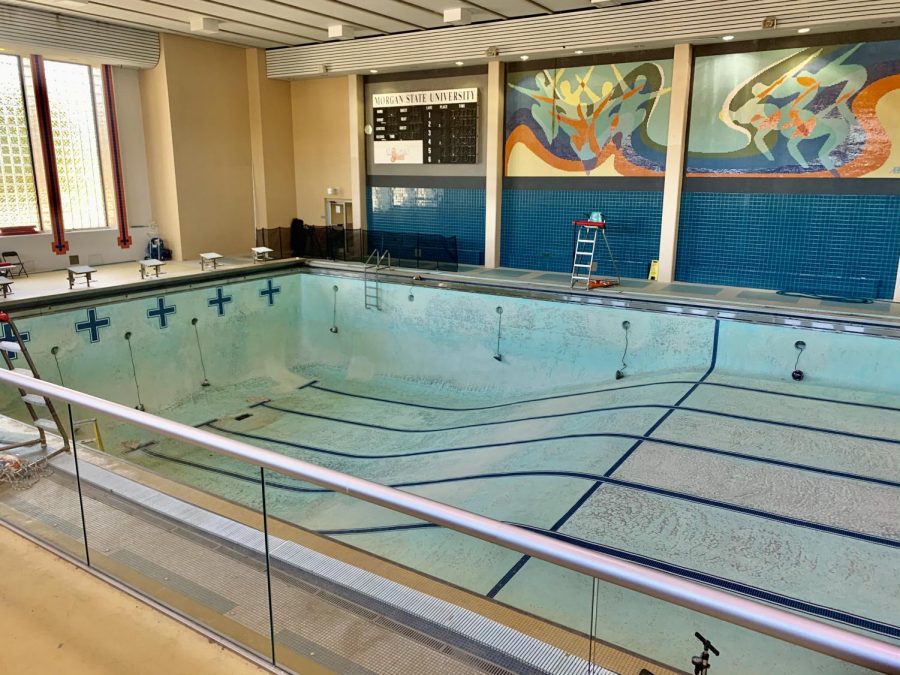 Freshman marketing major Mariana Addo was excited to learn how to swim and when she registered for the class, she also understood it fulfilled a physical education credit—a graduation requirement.

However, the semester has ended and she and many students never took a dip in the pool.

With the university’s knowledge of the pool’s closure, the class remained available for registration and many were urged to purchase goggles and swim caps from their instructors.

“We haven’t actually had class, we just walk in on Mondays and he takes attendance, then we leave,” Addo said.

In a routine maintenance inspection in July, Morgan State’s swimming pool was drained and a large leak was discovered. The leak forced the pool to be closed while the university attempted repairs.

It’s four months later and the pool remains under construction.

In July, the university contracted American Pool, a pool maintenance company, with the expectation that the repairs would be completed before the fall semester began.

The original estimate for the pool’s repairs was approximately $27,400. However, with the discovery of other damages, the university is expected to pay a total of $29,781, according to Kim McCalla, Morgan’s associate vice president.

“The projected completion of the project is a little bit hard for what we’re doing,” McCalla said. “Since we didn’t know what exactly was causing the problem in the first place, a lot of it has been investigative work.”

“It also has stopped us from doing underwater recording,” O’Neal said. “It also has discouraged a number of new members from entering our club because some of them simply wanted to swim.”

Within the same hour that the email was sent to Boiling, it was forwarded to several staff members within Morgan’s construction management department, including McCalla.

“We knew we had a leak, we didn’t know what was causing the leak,” McCalla said.

Construction did not begin until mid-October, according to McCalla. With the new anticipated date of the pool’s completion scheduled for sometime in December, many students have been left without the chance to get in the water.

“It should’ve been tended to before this semester to be ready in time for the school activities that depend on the pool’s functions,” O’Neal said.

While the lack of water has frustrated students, it’s also forced professors including Morgan’s swim instructor Edward Watson to change their curriculum.

“Well with no water in the pool, it’s hard to teach a swimming class,” Watson said. “I was keeping the kids positive and I’ve been meeting with every scheduled class.”

Watson’s solution was to teach students through the research, in an effort to capture the essence of the sport. While he educated his students, many simply wanted to get in the water.

“I went to see if the pool was ready and it literally looked the same as it did on the first day of school,” said sophomore sociology major Angella Ramos.

As the pool’s estimated date of completion remains sometime this month, according to McCalla, she hopes it will be ready in time, as students have begun to register for next semester’s class.

Left unclear, however, is what will happen to the students who enrolled for this semester and never got a chance to swim, much less learn to swim.

“I am disappointed that the semester is almost over, and I still have yet to learn anything about swimming,” Addo said.

—NaTavia Williams contributed to this article