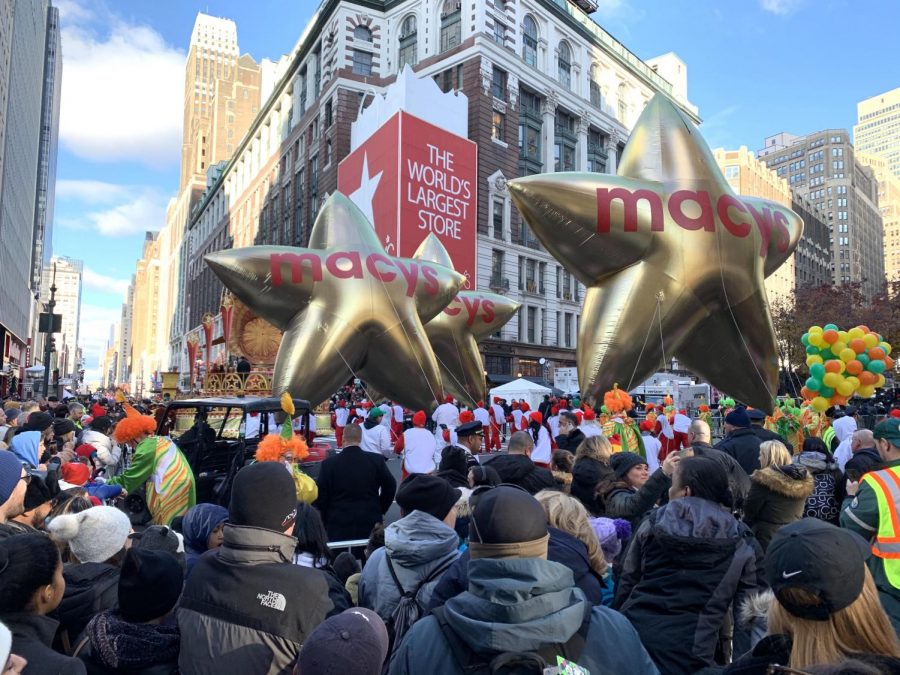 NEW YORK—Malcolm Mobley, a sophomore engineering major, was startled awake with a loud banging on his hotel door.

It was Nov. 27 at 3:15 a.m. and both Mobley and his roommate had overslept. They had 15 minutes to get dressed and board the bus with the rest of their section to make it to the “Today Show” on time in preparation for their performance in the 93rd annual Macy’s Thanksgiving Day Parade the next day.

Luckily, the rest of the tuba section came to the rescue.

“They came and got us and they hustled us out the door,” Mobley said.

Band members met at Morgan State the day before to catch a 6 a.m. bus to New York where they explored the city upon their arrival.

They spent the night at the La Quinta Inn & Suites in Clifton, N.J. and swam in the hotel pool until 10 p.m.—just a few hours shy of their call time for the following day.

Mobley said the team had been trying to blow off some steam, despite band director Melvin Miles’ warning.

“He was like ‘We’re going to New York to do something. This is not a vacation,’’” the tuba player recalled.

One day later, the band made history as Maryland’s first historically black university to perform in the Macy’s parade. With a 1 a.m. call time and more than a two-mile route ahead, Morgan State sponsored a 3 a.m. buffet-style breakfast for the entire band at the Tick Tock Diner in Manhattan.

Morgan State President David Wilson, who traveled to New York to support the band,  expressed his sentiments regarding the achievement in an email addressed to the university.

“I know you are as proud of our students as I am, and thank our Director of Bands, Mr. Melvin Miles, for his leadership of these young minds,” Wilson said.

When the university announced in 2018 that the marching band would perform in New York, the Morgan community was overwhelmed with support, including Shawn Mason, a Morgan grad and former band member.

Wanting to assist in any way he could, Mason reached out to Miles and others for guidance before he set on a task that would be described as the team’s last hurrah in the big city—the Thanksgiving luncheon.

He raised more than $2,000 in less than two weeks and coordinated a meal for the entire team, hosted in the Frederick Samuel Community Center in Harlem.

“You know it’s Thanksgiving, there’s a lot going on,” Mason said. “So just being a local here, just to make sure of course, in that old Morgan spirit—that our kids were taken care of.” 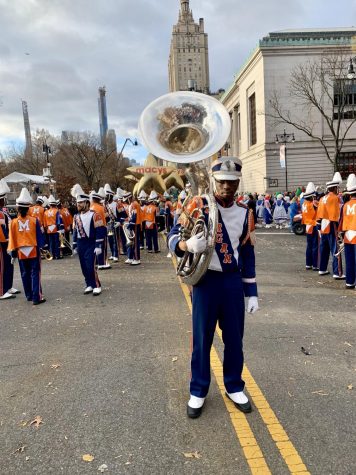 A crowd of between 3,000-6,000 spectators from all over the country saw the band perform around 10 a.m. from a spot in front of the main Macy’s store, located at the corner of W. 34th St. and Sixth Ave., in addition to an audience of millions watching on television.

It was a test of stamina for the band which was used to marching for approximately 30 minutes during Morgan State’s Homecoming parade in October.

According to Mobley, the Thanksgiving parade was twice as long, as the band began marching from Central Park to Herald Square — a roughly three-mile hike.

Brooke Danforth, an Ohio native and school teacher, found herself in New York during one of the busiest times of the year dressed in holiday-themed fleece joggers and a sweatshirt to match—with her mother by her side.

The pair was all smiles, despite the high winds, as the sound of horns and drums blared in the distance—an indication that the marchers were near.

As an educator, she was proud to see an HBCU marching band leading the parade.

“I teach in an urban community so I’m always pushing the students for HBCUs,” she said.

Susan Derry, a Maryland native and New York resident, recalled performing with the Morgan State band in 2008 for a production of Leonard Bernstein’s “Mass” as she stood among the crowd.

“It calls for a marching band and because it was in Baltimore they did it with Morgan State,” Derry said.

After their meal, the marching band trekked back to New Jersey to change before they tackled New York’s Times Square, where they visited Dallas BBQ, a barbeque restaurant on W 42nd Street.

The band boarded the bus back to Morgan the day after Thanksgiving at approximately 10:30 a.m.

“It went by in the blink of an eye,” said freshman trombone player Reginald Allen II. “It didn’t really hit me until later that we just lead the parade as an HBCU band, or that as a freshman, I would get an opportunity like this.”