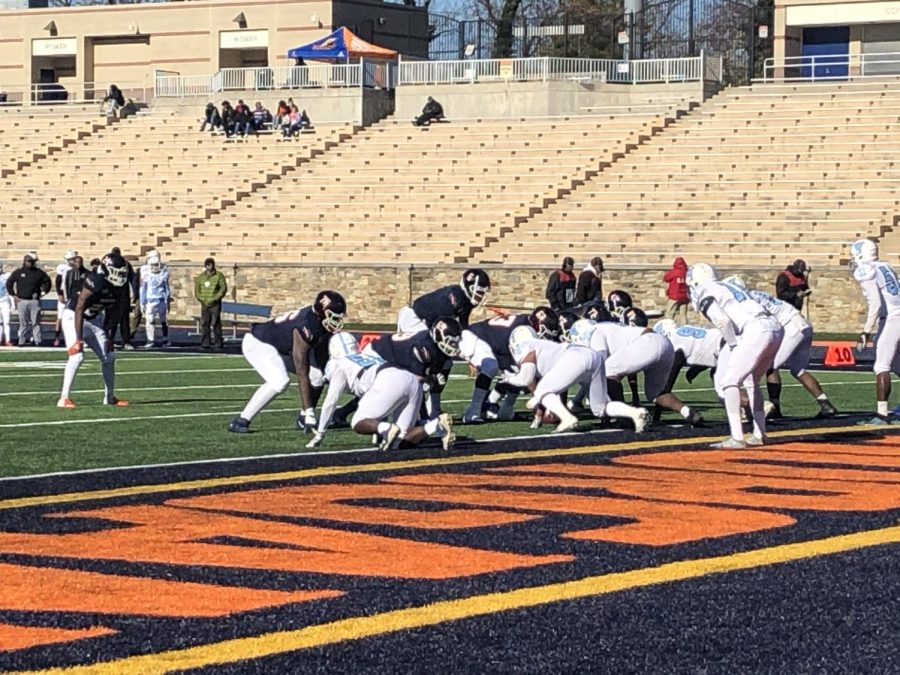 With a final score of 59-26, the Bears showed flashes of dominance in their last home game of the season. The defense forced four turnovers and the offense had 659 yards total.

Morgan State paid tribute to the seniors on the team as they played their final home game.

The Bears got on the board early and often in the first half. On the fourth play of the game, the team scored on a one-yard touchdown run from senior running back Joshua Chase that sprung the Bears into a lead they never lost.

Although the Dragons mustered 12 points in the first half, they wouldn’t score again until midway through the fourth. Instead, their offense watched as the Bears’ offense drove up and down the field.

Manasseh Bailey, a senior and number one receiver, finished the game with five catches, 177 yards and four touchdowns, it was their highest point total of the season.

The senior is on his way to his first 1000-yard season. However, he’s only focused on his team’s success and not personal accolades.

“Yards don’t really mean a lot to me, it’s my last year so I want to go out with a bang,” Bailey said.

Harris found his receivers open in the Dragons’ secondary the entire game. He threw for 317-yards going 11-17 with no turnovers, but he still said his performance needed work.

“It wasn’t what I wanted it to be, I need to work on seeing the defense quicker and getting the ball out quicker,” Harris said.

The Bears had playmakers everywhere on offense from the air attack down to the rushing game. Chase finished with 101-yards on 24 carries and freshman running back Jabriel Johnson finished with 124-yards on 17 carries.

The Bears gave up two touchdowns in the fourth when the game was already decided.

“Even though they’re a division II team, they have really good coaches,” said head coach Tyrone Wheatley. “We just have to do a better job on the back end eliminating the big play.”

He said the team needs to stop playing to their opponent regardless of the record. Although Lynchburg didn’t have a win this season, he didn’t want his team to underestimate them.

“Since day one I’ve always said you never underestimate anyone,” Wheatley said. “It can be a bunch of five-year olds out there and we’re going to go out there and play them like they’re grown men.”

Although the Bears won big, it was bittersweet for the head coach. This marked the last time 16 seniors would suit up for a game in Hughes Stadium.

“Some of these guys you wish you had them for another three-years or you wish you were here at the beginning of their careers,” said Wheatley. “That’s the unfortunate part about this game, but they really won’t leave you, they’ll come back to support.”

Morgan will close their season with a road game against the Howard University Bison on Nov.23 at 1p.m.