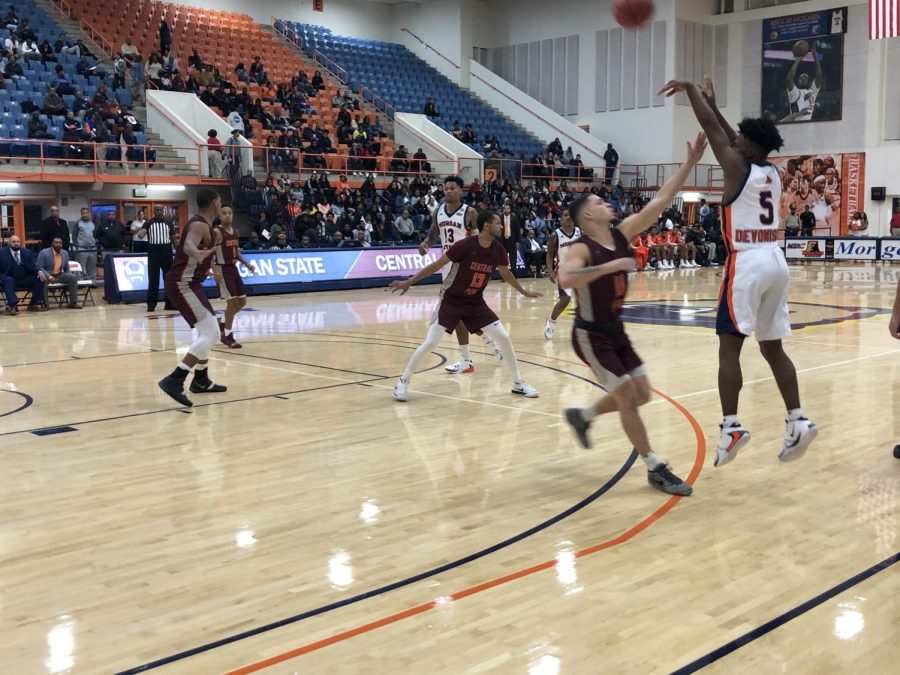 Stanley Davis, a senior guard who averaged 12.5 points per game, was the driving force for the Morgan State Bears’ first win of the season, 71-44 on Wednesday evening.

With an accumulation of 14 points and a perfect field goal percentage, Davis, a multi-platform production major, led his team to a victory against the Central Penn Knights, a team the Bears have never played before.

“I came out and tried to get the spark for my team and we got the win, ” Davis said.

With a score of 38-21 by halftime, Morgan trailed more than ten points behind Central Penn. However, Morgan’s first two possessions resulted in two dunks from Davis and as a floor general, he found his way to the ball numerous times.

Soon, the game became out of reach for their opponent.

Whether it was assisting, making his way to the free-throw line or throwing down a dunk, he found ways to assist his team. However, off the court—he’s reserved.

During pregame warmups, Davis can be found listening to gospel music in an effort to clear his mind and get in the zone.

Broadus was proud of how Davis stepped into his leadership role as team captain today as well.

Marked as the first win for new head coach Kevin Broadus, he couldn’t help but congratulate Davis on his team effort that ultimately led to the win.

“Stanley did a really good job today leading his guys, and you could hear him coaching the guys from the sideline when he wasn’t in the game,” Broadus said.

The team featured several new faces in the starting lineup, including Troy Baxter, 6-foot-9-inch junior liberal arts major transferred from Florida Gulf Coast, a public university in Southwest Florida, made an immediate impact in his Morgan debut. As a forward, he provided the team with some much-needed length at the position and it shows on the stat sheet.

With five blocks and seven rebounds, he’s another reason for the team’s success.

“I was a little rusty at the beginning and I got in my own head a little bit, but I gained my confidence in the second half,” Baxter said. “I just started playing harder by rebounding and dunking.”

The team finished with four scorers in double digits and 28 points from their bench.

With their first win of the season and momentum to carry them to their second game, Morgan is set to go on the road to face Temple University (1-0) on Saturday, Nov. 9.