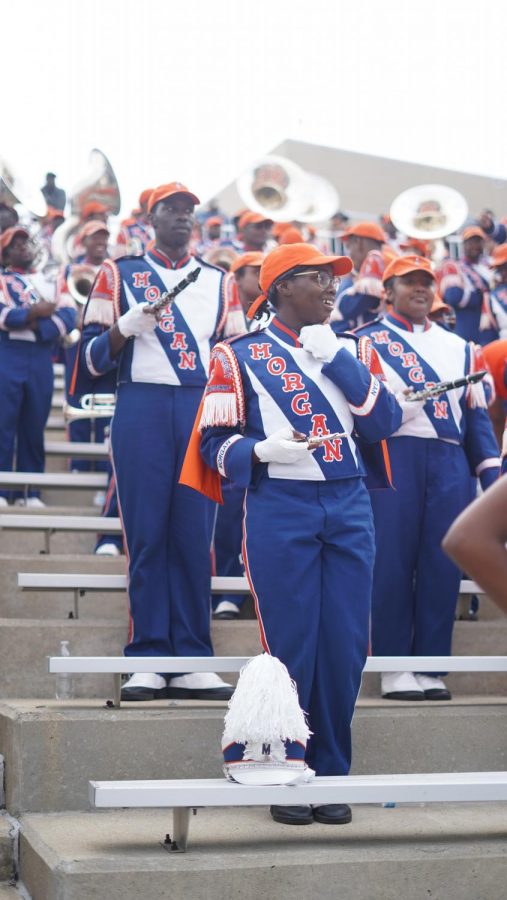 The Magnificent Marching Machine is stationed at the stands during Morgan's 2019 Homecoming football game.

Malcolm Mobley, tuba player and sophomore engineering major, was usually exhausted after a late night practice session, but at a little after 10 p.m. on a cool October night, the marching band was electric with energy—they weren’t practicing alone.

“It’s like 200-something people on the field,” he said. “And there’s twice the amount of sound.”

On Sunday, Nov. 3 Morgan State’s marching band performed alongside the Baltimore Ravens’ band. Morgan State University sponsored the Baltimore Ravens vs. The New England Patriots game, the university announced earlier this week. The two bands have been practicing together to prepare. However, the Magnificent Marching Machine is no stranger to the stadium, in fact, they opened for the Ravens in their first Baltimore game over 20 years ago.

Former owner Art Modell moved the team—previously known as the Cleveland Browns—to Baltimore in 1996. Modell was inspired by a poem by Edgar Allen Poe when he renamed the team, according to their website.

And Band Director Melvin Miles still has a ticket from the inaugural game.

“They wanted a band and somebody said, ‘If you want a band for your game call Morgan State University.’”

The university has always had a relationship with the Baltimore football team. Last year, University President David Wilson announced a partnership with the Ravens and the Orioles to enhance university visibility.

Earlier this year, the marching band traveled with the university’s football team, the Morgan State Bears, when they played against the Army Black Knights in West Point, N.Y. Although the Bears lost, 52-21, Mobley said the band got a chance at a major performance ahead of their Macy’s Thanksgiving Day Parade debut.

“That was the first time we ever went to Army and were allowed to take the field,” Mobley said. “So that was pretty cool.”

The band typically practices five days a week and four hours per day, according to Miles. They’ll also do a three hour morning practice before the football team’s home game.

Miles said that the routine hasn’t changed this year in preparation for the Thanksgiving performance. However, not everything has stayed the same. This season, the band changed drum majors, something that normally happens every two to three years.

For the past two years, senior music major Gerald Apugo occupied the position. He’s known for his flashy high step and lovable personality.

But this school year, he stepped down to focus on playing the trombone.

Stepping in for Apugo was Justin Fabiyi-King, a senior information systems major who previously played the saxophone.

Miles said that it’s normal for drum majors to return to the band and that the job can be taxing.

The 69-year-old Morgan alum admitted he had been anxious about putting two bands with different styles together for one performance. He said that even Morgan alumni who were in the Ravens’ band advised against it.

Both groups were pleasantly surprised and found a routine that complimented everyone.

“It turned out to be pretty good,” Miles said.

He added that members of the Ravens’ band were also excited to learn from Morgan’s band and give the students a unique experience.

“Most of these students haven’t had a chance to play in that stadium.”

The Magnificent Marching Machine took the field during the pre-game at M&T Bank Stadium Sunday, Nov. 3.