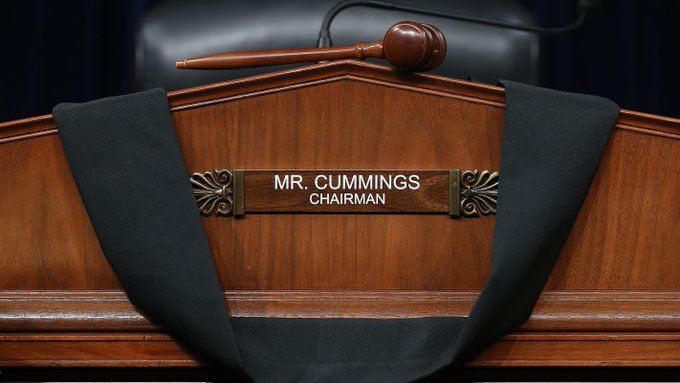 Rep. Elijah Cummings served as the Chair of the Committee of Oversight and Reform.

Flowers accompanied Rep. Elijah Cummings’ casket as he laid in a navy blue suit with a folded American flag rested on his side. Guests came in waves upon the beginning of the ceremony at 10 a.m. to pay their respects to the late congressman.

Of the attendees was Toca Williams, a New York resident who traveled over 300 miles to honor the late congressman.

“I had to be here to say goodbye and to let him know how much he means to me,” Toca Williams said.

Known as one of the three most significant politicians in the history of Maryland, Cummings died last week at Gilchrist Hospice Care, a Johns Hopkins affiliate, due to long-standing health challenges, according to a press release from his office. He was 68.

After the announcement that the late congressman’s body would lie in repose at Morgan State’s Murphy Fine Arts Center, students, staff and members of the University’s Reserve Officers’ Training Corps (ROTC) helped facilitate the event.

The first African American in history to be named Speaker Pro Tempore held the seat of Maryland’s 7th Congressional District for more than 20 years and was the chair of the Oversight Committee, one of the three committees currently overseeing President Donald Trump’s impeachment investigation. He was also a member of the university’s Board of Regents.

Morgan Alum Carolyn Williams trekked back to her alma mater to pay her respects. As a Baltimore resident, she described him as a hands-on politician who was always present, from local schools to voting polls.

Williams believes that more people should emulate the character that Cummings had.

“Because of Elijah being who he was and the kind of person that he was, [people should] learn to respect our government and aspire to be like him as far as representing people,” Carolyn Williams said.

As a young boy, he regularly listened to King’s speeches on the radio.

“[Cummings] marched with King—we know what King was about so we have suffered a tremendous loss,” Toca Williams said. “The world is going to miss a man of justice, peace, harmony and love.”

Martin Luther King III, the eldest son of the American civil rights leader, made a statement on Twitter approximately two hours after Cummings passed and expressed his gratitude towards the late congressman to his more than nine thousand followers.

I am very shocked and saddened by the death of Congressman Elijah Cummings. He was a real champion in the House of Representatives, and his powerful voice will be missed tremendously. Rest In Peace, sir. Thank you for all you have done for our nation.#ElijahCummings

“I urge all my fellow Americans to carry Dr. King’s dream in their hearts and work towards building a more fair, equal and just society,” Cummings said in a press release from his office in honor of last year’s Martin Luther King Day.

As the university prepares for the tribute service at 6 p.m., the crowd grows optimistic for the future of the country.

“Maybe he’s given enough and [passed] the torch to enough of our great people still have here on Earth, to carry on this fight and to make things right,” Toca Williams said.