Black Soul, Black Owned: A Look Into One of Baltimore’s True Black Entrepreneurs 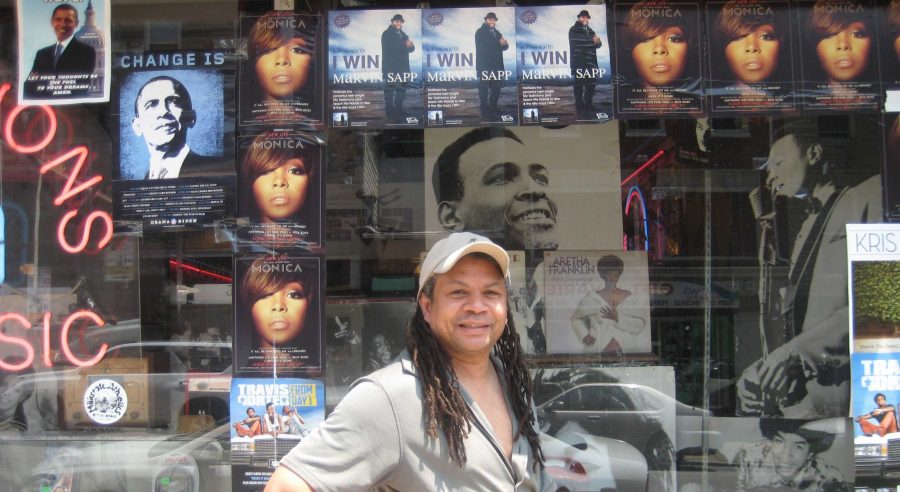 Life has few guarantees. That’s something people living today, when layoffs and home foreclosures are normal, understand. But there are always occurrences that are a safe bet to remain the same. The sun rising each day. Gas prices being outrageous. And at 10 a.m., Monday through Saturday, black, independent business proprietor, Larry Jeter, opening the door to his beloved record store, Dimensions in Music. However, the economy is in a downslide and the record industry is moving away from selling pressed copies of music. How does Jeter stay afloat in these harsh times?

Downtown, near the corner of Park Ave. and Saratoga St., lies what Jeter refers to as “A black museum for black music.” Jeter named his store Dimensions in Music because he believes that “black music is too diverse, complex, and beautiful to ever be one dimensional.” He has a shop that both grandparents and grandchildren can enjoy.

Even at first glance, Dimensions in Music feels special.  Outside is a big white billboard with the store’s name across the middle. It rests above a large window stamped with promotional posters of black artists from Nas to B.B.King.

The inside looks like a  “true music shop.” There isn’t a lot of room in there, because it’s stockpiled with vinyl records, CD’s, and DVD’S. Jeter has more than 150,000 pieces of product for sale. There’s a feel of organized confusion due to the rows of albums that dress every inch of the store, covered in the glow of neon lights on the walls.

Towards the front are compact discs of hip-hop and R& B artists. Towards the back are vinyls of gospel singers and funk musicians. At the register, a stand with DVD’s of concert footage and music documentaries. Behind it are photos of industry insiders and celebrities, with each picture containing a middle aged, light skinned man with a hair full of signature dreadlocks, and an inviting smile. That is the same man you’ll see running this establishment upon your entrance to the store, Mr. Jeter.

Having an independently owned record store like Dimensions in Music is almost impossible. Major retailers like F.Y.E. and Sam Goody’s have closed down because of epic changes in the music industry. Over the last decade, record sales have decreased by 50 percent, while total revenue from music related merchandise has fallen from 14.6 billion to 6.3 billion. Have people stopped listening to music? No. But it’s no secret that the internet has taken over music output. Getting your favorite artist’s new album is a mouse click away. ITunes sells over 6 billion songs a year, and has over 75 million customer accounts.

In the midst of these changes, it is tireless dedication, the entrepreneurial spirit, genuine love for his work and faith that has allowed Jeter to stay in business.

“God and Jesus. If you have faith, you don’t have anything blocking your view of creativity.” That’s the explanation that 57-year-old  Jeter gives, explaining how he has managed to maintain a career in music retail for 37 years and stay the boss of his own store for over 20. “There are people that own companies, but don’t understand their products. Knowing black music, that’s how I survive.”

The son of a jazz musician whom he refers to as “Saxophone,” Jeter’s been around music since birth. During his childhood, his house would become a hotel to his father’s musician friends who were traveling through Baltimore. Jeter himself is a drummer, who played in clubs around the city as early as 16. He was 17 when he started working in record shops and has followed that path ever since.

A musician and music retailer is the only work he has ever known. “I always knew I wanted to be in the business of selling music. My father would buy me 45’s and I would charge my friends to come over and listen to them.”

It was 1989 when Jeter realized his potential as an entrepreneur. He turned down an offer to take over the record store he was then working in, opting instead to take the difficult route of opening one himself.  He recalls being confident enough to find his own path.

“I decided early that I would never let anybody control my destiny. I didn’t want the worries that so many people have today of maybe being fired or the company closing on me.” His determination paid huge dividends.

Dimensions in Music started out in the 200 block of Charles St. in the early 90’s. Once Jeter relocated it to Park Ave. a few years later, it was not only a shop, but also a hotbed for aspiring jazz artists. He hosted a TV show in the store that aired on local cable stations, where performers could display their talents.

Yet, it wasn’t only musicians Jeter was interested in helping out. A believer in giving back to the community, Jeter has done plenty of charitable works. He has sponsored bus trips for children. He has visited schools and given motivational speeches. Around the holidays, he has held drives where bringing in canned goods for the less fortunate will get you free CD’S.

“People have been good to me. I don’t think there’s ever been a record store, even today, that reached out to the kids and gave back like we did, but I felt it was a responsibility and not a luxury.”

Despite his positive demeanor, Jeter is no fool, and knows he has much to be concerned about. He understands that what he sells is something the masses can obtain by other means. And he has passionate feelings about it.

“The 70’s and 80’s was the last great era for buying and collecting music. 12 inches only had one song, and people would buy that. Those who download don’t realize that what they are getting isn’t worth anything. The hard copies of music are valuable. They become collector’s items years from now. Print never loses its value.”

Jeter doesn’t hesitate calling out the responsible parties that make things seem otherwise. “The music technology is a monster record companies created and lost control of. They don’t realize it now, but the further it goes, the less the music is actually going to mean. And it’s their fault, so it’s on them to bring it back to where the hard copy actually means something again.”

Nevertheless, Jeter remains undeterred.  “No matter how technology changes, you just have to find your niche,” he says. “You have to be tough enough to weather the storm.” He also knows exactly how he’s maintained his business. “The problem with bigger stores is they rent their buildings by the square foot. And every foot needs to be turning a profit, or it’s considered to not be working. With me, it’s more personal. I know everybody that comes in here. Loyal customers keep me in business.”

The storeowner does not plan on retiring any time soon.“Only if they tear down my building. I’m comfortable and I honestly love what I do. I’m not going anywhere.”