‘Thoughts Of A Colored Man’ emotionally engages audiences of all races 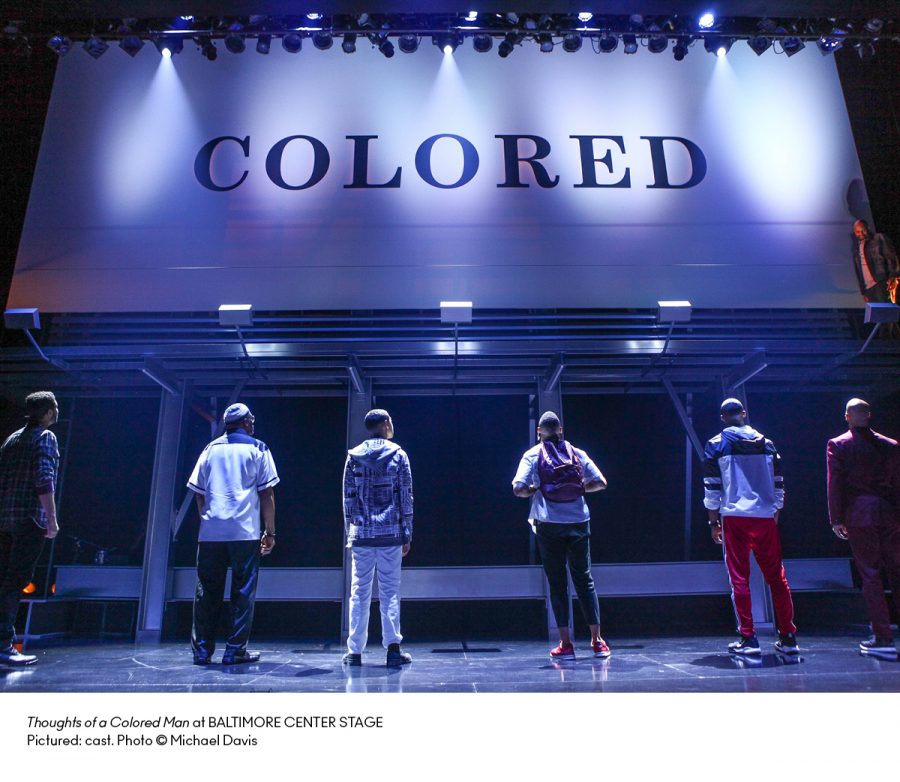 Gunshots rang out as they waited in line on the streets of Brooklyn, N. Y. for the newest pair of  Air Jordan sneakers. Tears swelled in his eyes as he thought of the battle his mother had fought against AIDS for over 20 years. Anger built up inside of him as he watched his young athletes throw away a future in basketball he wish he had. Seven men, seven emotions, and seven stories are shared in a theatrical blend of poetry, music, and dance.

“Thoughts of A Colored Man,” written by Keenan Scott II, one of today’s upcoming playwrights, made its Baltimore debut on Tuesday, Oct. 15 at Baltimore Center Stage. The play highlights seven black men who each represent an emotion that black man typically feel, but don’t express— love, lust, passion, happiness, anger, depression and wisdom.

“I often heard black men don’t express themselves and don’t know how to,” Scott said. “ I wanted to write a piece that personified these emotions.”

He drew inspiration from poets, inspirational black speakers and authors. One key person who stood out to him was Fred Hampton, an African American activist and revolutionary. Hampton’s stories had a huge impact on Scott while he was writing his own poetry in college. He said he was heavily influenced by the movements that empowered the black community and wanted to incorporate that in his own renditions.

The first scene introduced Depression, though we did not know at the time. His struggles resonated in many of the hearts in the audience. He was the friend, brother, uncle, or dad who let go of his dreams to care for his family. Stuck at a minimum wage full-time job, it was clear he was frustrated at the world and the cards he was dealt. However, he would not change his predicament even if he was given the chance. In his mind, family came first, though Happiness would disagree.

Like Depression, each man had a story that is relatable to the modern man. Although the seven lived different lives and experienced a variety of events, they were connected through their inability to convey their deepest thoughts. In the play, their backgrounds shaped their outlook on life and the emotion they characterized. Scott captured real-life problems in a dramatized production full of spoken word.

TOACM has been compared to playwright Ntozake Shange’s “For Colored Girls Who Have Considered Suicide/ When The Rainbow Is Enuf.” Shange’s work follows seven women as they battle oppression in a sexist and racist society during the 1970’s feminist movement. Both plays use movement and poetic language to explain the dynamics of the world but the big difference between the plays was, while Scott had a distinct linear storyline, Shange focused on “vignettes that didn’t connect.”

The one thing that made this play stand out from the countless others, was the actors themselves. The men embodied their characters so much so that it wouldn’t be surprising if they truly lived those lives. They enticed the audience with lyrical messages and slam poetry at every second.

When asked what character he resonated with the most, actor Ryan Jamaal Swain, who played Love, said Passion.

“At the end, his calling card was ‘I run through the vein of dreamers,’” Swain said. “I think that’s something we all have.”

Businesswoman Sheila Johnson, co-founder of Black Entertainment Television, said that the play embodies what the voice of black men should be in entertainment.

“We really need these types of stories because they’ve been stifled and they’re continuing being stifled through the media and through news,” Johnson said.

Johnson sold BET to Viacom in 2001 because she believes African Americans are losing their voice in media. She said that more productions like TOACM and playwrights like Scott need to be supported which was part of the reason why she invested in the play.

Diversity that lit up the audience for the all-black play. The seats were filled with teenagers and people of all races ranging from the young to the elderly.

Audience member, Nick Staigerwald, believes the play is something that everyone should watch regardless of their race or upbringing.

“As someone who grew up as a white man, I did not have a lot of adversity,” he said. “It was a really beautiful experience and learning experience.” Staigerwald said.