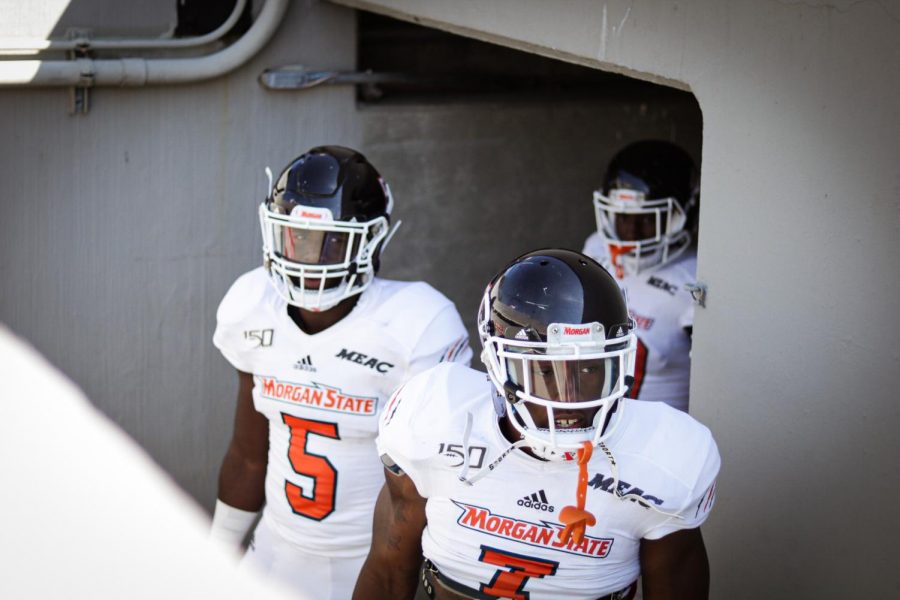 The Bears emerge from the tunnel ready for the game.

In the history of Morgan, 36 players have been drafted in the NFL and only four have played for the Raiders including Queen.

While the number 47 may not have a special meaning to most, Wheatley holds the number close to his heart. Not only did he and Queen play for the Raiders— they both wore jersey number 47.

“Me coming here wasn’t a coincidence, I was supposed to come here,” Wheatley said.

The Bears fell to the North Carolina Central Eagles 27-17 on Saturday, but Wheatley remains optimistic for the season as he described the performance of the team’s first game compared to their most recent.

“The mistakes were glaring but if you take away those mistakes we are in the right spot to win,” Wheatley said.

Before Wheatley was Morgan’s head football coach, he was a notable NFL running back. With an award-winning college career at Michigan, he went on to play 10 seasons with the professional league.

Recognized as the most successful period of his career, Wheatley played for the Raiders from 1999 to 2004 and appeared in the 2003 Super Bowl.

While Wheatley has only played for three coaches including Jon Gruden, the current head coach for the Raiders, the Michigan alumni said his experience as a football player prepared him for his coaching career.

Wheatley described Gruden as someone who genuinely loves the game.

“Gruden was a technician, attention to detail, he was a jackhammer,” Wheatley said. “This guy didn’t sleep but man, he was like a kid on the field.”

As the Bears prepare to play the Delaware State Hornets, he was clear that the homecoming game is not for his players—but for those in the stands. While the reality of the game can be difficult, he said he stresses the importance of finding motivation for the sport off the field.

“A lot of people don’t love the game when it’s tough,” Wheatley said. They have to have a motivation whether it’s ‘I’m a Division 1 football player’ or the money, girls, the jersey— whatever your motivation may be,” Wheatley said.

Edward Scott, Morgan State’s Athletic Director said he was intrigued by the family-oriented values Wheatley managed to instill within the team thus far.

“He really wants to give back and educate young African American men through the sport of football,” Scott said.

Wheatley said he enjoys walking on campus and witnessing students in pursuit of class.

“I get to see the future lawyers, doctors, teachers just waking up and going to class, bringing life to the university,” Wheatley said.

The Bears will face the Hornets at 1 p.m. on Saturday at Morgan’s home field, Hughes Stadium.

“My focus truly right now is winning for the people that come back for homecoming, giving them a win and something to be proud of,” Wheatley said.