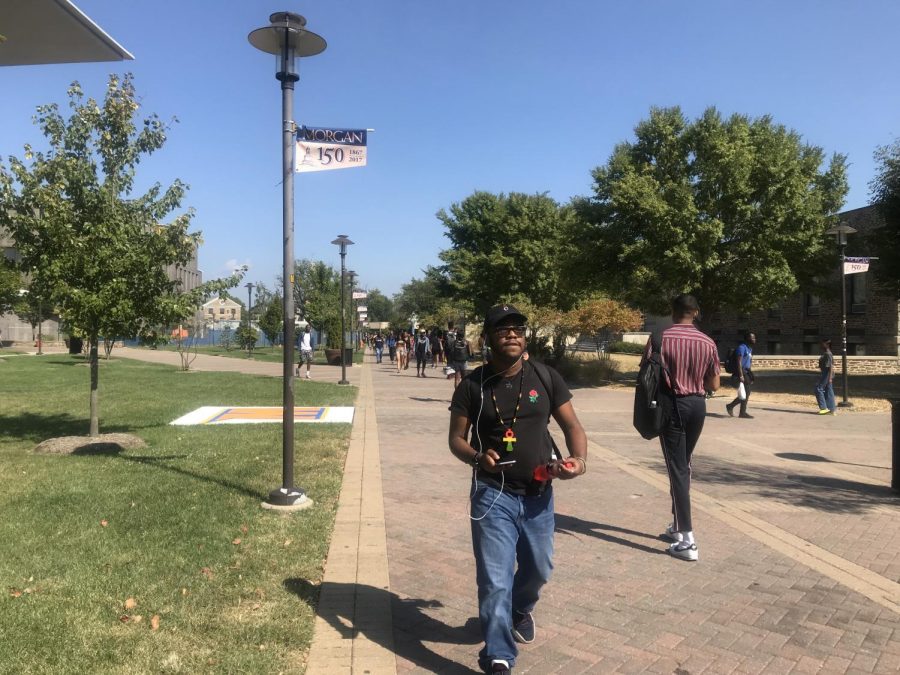 Morgan students walk between the library and the Student Center.

During their senior year of high school students are tasked with applying for colleges, however, for freshmen Dasaun Gooding, Neaya DeGreat-Cousar, Amahni Fitchett, and Liza Baker, their advisors didn’t help them decide what they wanted to pursue.

“They helped me apply to college but not figure out what I like and want to major in,” Fitchett said.

Senior Astrid Castillo, who switched her major from social work to applied liberal studies, hosted an undecided majors event Sept. 9 where she said knowing what you want to do right out of high school is “unrealistic.”

“We go into high school and then we come out 17-years-old and 18-years-old then we get into college and it’s ‘pick what you want to do for the rest of your life,” she said.

Academic advisor Derrell Brown, who teaches an orientation class for undecided freshmen was once an undecided freshman himself. He believes high school advisors should employ college readiness courses to better prepare students seeking a post-secondary education.

“If it’s not a major, possibly a trade.” Brown said. “If not college there should be a plan in place.”

He also expressed the idea that college may not be for everyone.

“Let these students know what’s out there besides college and let them know what college has to offer.”

After graduating high school, students are tasked with the decision of choosing a major, whether or not they are prepared. Morgan State’s ACCESS Orientation Program attempts to assuage some of the fears of incoming freshmen who are required to attend one of its four sessions. The week-long sessions begin on July 9 and the final session typically starts a week before classes begin.

“I remember the ACCESS Program and we all had to go to a certain building due to our major to make our schedule and I went with the business people and I was sitting there and I was like ‘I don’t want to do this,’” Baker said. “It just felt rushed. I didn’t feel comfortable and ready for it.”

Some undecided students navigate campus with a sense of isolation. Fitchett said that when she was making her schedule, she felt like the only one who was undecided.

“Everybody else knew what they wanted I was nervous and scared to be undecided,” Fitchett said.

Brown’s class bridges the gap between high school and the first year of college.

“If they weren’t covering it in high school about what majors are available, financial literacy, and so forth we’re going to cover that in my class, so moving forward they know they have a resource they can rely on,” Brown said.

Some undecided students start as freshmen with an idea of what they want to study, but change their mind shortly after. At first, DeGreat-Cousar decided to major in medical technology but realized math wasn’t her strong suit.

Gooding wanted to take photographs but didn’t want to be locked into one career path until he was sure.

Both students said they felt pressured to pick a major as quickly as possible. For Baker, it started in high school.

“All through high school I [have] been surrounded by people who knew what they wanted to do and it just made me kind of sad because I felt like ‘what am I here for,’” Baker said. “In high school, teachers make it seem like you have to know what you want to do as soon as you leave.”

Brown doesn’t want students to feel pressured, he wants them to understand that they still have time.

“I’m letting them know so they’re not discouraged when they found out their peers have classes, so they don’t think their classes are different,” Brown said.

“They have the same classes the first semester but at a point in time those general education requirements will end and those who have declared their major they are going to go into their major classes. But if you’re undeclared what are you going to take.”

Career specialist Wenona Richardson recommended that undecided majors consider outside help from a specialist. She also recommended online tools like MyPlan, a college readiness application that gives major suggestions for students based off of personality, interests and values.

“All undecided students who can’t make up their mind about the major they’ll like to have can always go to their career specialist,” Richardson said.