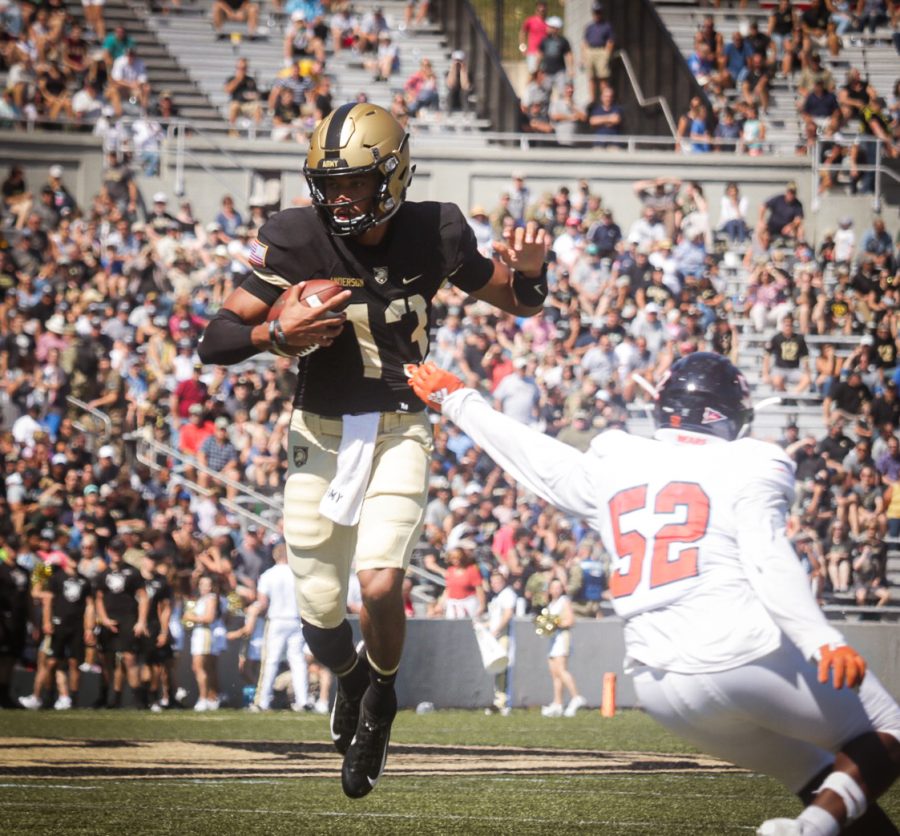 Army quarterback Christian Anderson hugs the ball as linebacker Detrick Washington goes for the tackle, extending his arm to make the play.

The economics major said he chose Morgan State because on campus, although he was far from home, he still felt like he was amongst family.

“When I came on my visit it felt like a family, which played a big aspect in why I chose to come here,” Castonso said.

The minute his parents heard that their son would be playing against West Point they secured plane tickets and hotel rooms.

“It is a blessing to be able to play on this national stage going into the game against Army,” junior defensive lineman Chima Dunga said.  “They are very disciplined up front, but I look at them as another opponent on the schedule. I considered this as a league game for myself because I feel that we could compete with Army.”

The Morgan State Bears were defeated 52-21 on Saturday, Sept. 21 by the Army Black Knights at Michie Stadium in West Point, N.Y., pushing their record back, 0-3.

But the Bears didn’t go down without a fight.

Before kick-off, the crowd was electrified as West Point’s parachute team delivered the game ball.

Early in the first quarter, on the Black Knights second drive of the game, running back Artice Hobbs IV scored a rushing touchdown earning them a 7-0 lead. The Bears answered back with a 66-yard touchdown pass to senior wide receiver Manasseh Bailey tying the score at 7-7. To continue the Bears momentum, senior linebacker Rico Kennedy sacked the Black Knights’ quarterback forcing a fumble that was recovered by the Bears. After the recovered fumble, freshman running back Jabriel Johnson pushed the score up to 14-7 with a 25-yard touchdown run.

“I am very excited with the Bears play in the first quarter,” he said. “They are playing with great Morgan Pride.”

However, penalties and turnovers killed the Bears’ momentum throughout the remainder of the game.

Opening the second quarter, the Black Knights scored another rushing touchdown tying the game at 14-14. The Bears’ aspirations for offensive success were cut short by a false start penalty which led to an interception.

After the game both teams stood behind one another as each band played their school song.

“We don’t take any of those teams for granted because anyone could be beaten at anytime in our conference,” Bryce Wilson said. “We are just going to continue practicing hard so that we can win the MEAC conference and go on to win the celebration bowl.”

The Bears will play the North Carolina Central Eagles to start their MEAC Conference under the lights in the newly-renovated Hughes Stadium on Sept. 28  at 6:00 p.m.