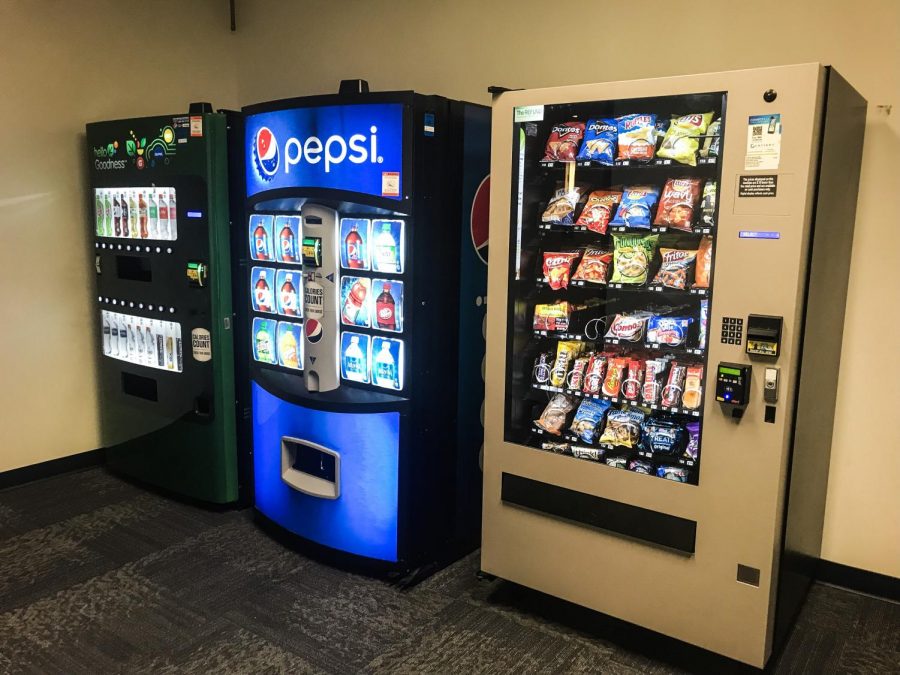 Vending machines stand on the second floor of the Graves School of Business.

This past year has brought a series of changes to Morgan State University. As cranes hover the campus in the name of expansion, students may have missed a more subtle change to most on-campus buildings.

One week before school began, new vending machines were brought to campus to replace the old ones. The black boxes with cages covering the glass have been replaced by white and space grey futuristic machines.

Like the previous machines, they include Apple Pay and card payments in addition to dollars and coins. However, these new vending machines are comprised of motion-sensor technology that lights up when someone walks past it and an updated security feature. Whenever it suspects someone is trying to steal a snack or tamper with the machine, it locks up. A service worker then travels to that location and unlocks it.

The machines are literally shake-proof.

The change in the new vending machines does not come cheap. Prices for some of the snacks have gone up by 50 cents or more. Now, some students who stop by the vending machine for a quick midday or late-night snack have refused to pay for the small treats.

“I used to love the vending machines. Whenever I couldn’t make it to the canteen in time, they would be my go-to,” said junior nursing major,  Anissa Jones. “Now it’s just too much.”

Over the summer, all of the vending machines were removed from the academic buildings and residence halls.

For the 2018-2019 academic school year, Morgan State University signed a contract with a company named Royalle Dining Services that supplied the previous machines. Before the fall 2019 school year began, the university partnered with a completely different vending company, Canteen.

“This company will allow us to see the sales of the vending machines, what is being bought consistently, add more variety, and offer healthier options,” said Ron Stevenson, the interim director of Business and Auxiliary Services.

Stevenson added that Business and Auxiliary Services are working on adding BearCards as a payment option to the vending machines to make them more convenient for students who use the “Limited General” option to pay for snacks at the Student Center’s Canteen or any of the eateries on campus.

Students who frequent the vending machines expressed enthusiasm about the possibility of using their BearCards as a payment option.

“I live in O’Connell so I use the vending machines a lot, especially for a snack at night,” said freshman industrial engineering major, Nasir Christie. “I could just use the money I already have loaded on there.”

According to Justin Hall, the assistant director of Student Life and Engagement, the university signs a contract with a company that supplies the machines every term. The company then sends over an employee to deliver and refill the machine every few weeks.

Hall said the university does not receive any money based off of the profit made from the vending machines. The university pays a set price each term and the company collects its pay from the machines.

In response to speculation from returning students that the machines were switched because of the tendency of students to shake the machines if a snack gets stuck, Hall said that it played no role in the university’s decision.