Campus security at the forefront of Morgan town hall discussion 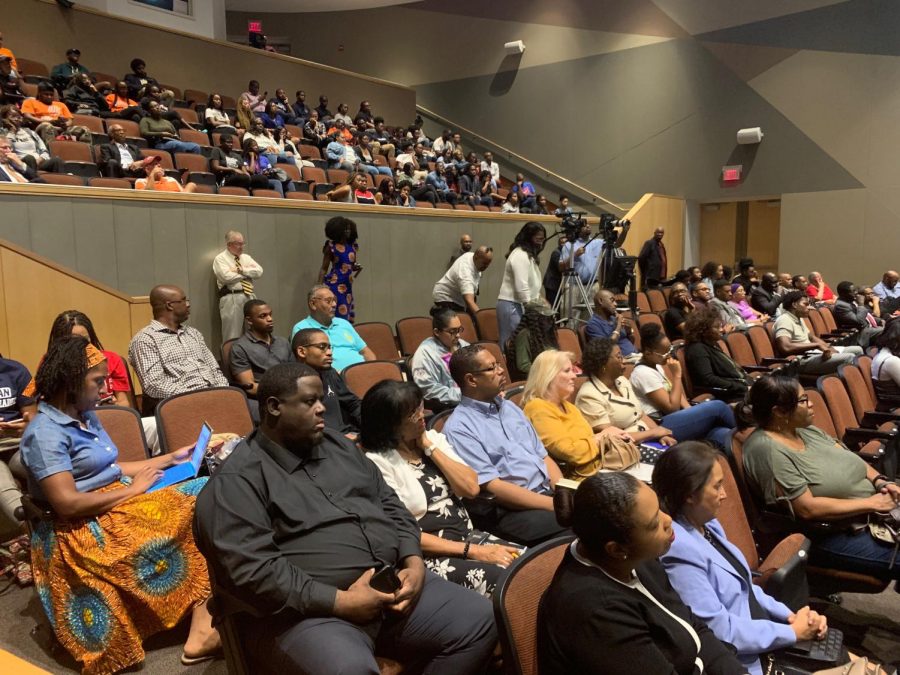 The audience actively listened as President Wilson addressed the audience.

Morgan State President David Wilson addressed the biggest topics of the night. He gave updates on construction and housing along with the university’s recurring theme of campus security.

Wilson detailed Morgan’s several efforts to increase campus safety including the implementation of fences along the perimeter of Marble Hall Garden apartments and additional security guards.

“No one should ever park on Loch Raven Road,” Wilson said in response to the shooting that resulted in the death of business major Manuel Luis.

Luis was forced to park on the outskirts of Morgan View apartments because all of the visitor parking spaces were occupied.

After the news circulated, the university received immense criticism.

In response, Morgan View increased parking spaces for both its residents and their visitors. Residents have the additional option to pay for their parking permits through financial aid.

Wilson revealed a list of upcoming construction projects including a new science complex, a health and human services building and apartment-style housing that is set to replace the Thurgood Marshall complex on campus.

He said the highly anticipated new student service building, Calvin and Tina Tyler Hall is projected to open fall of 2020.

Towards the end of the meeting, the audience was encouraged to voice their concerns and students were not afraid to express their grievances, while topics ranged from the classroom to dietary needs.

Some students were encouraged by Wilson’s updates.

“I was very pleased with the way students received the information and I believe that they were very pleased to receive this kind of comprehensive report,” Wilson said.

However, social work major Anasia Gladney left the town hall dissatisfied with Wilson’s response to the university’s issues and did not believe the challenges brought to Wilson’s attention at the town hall will be solved.

“I don’t think they’ll be tackled,” she said with a shrug. “I just think he was like ‘ok, let’s just say this to get the kids off my back.’