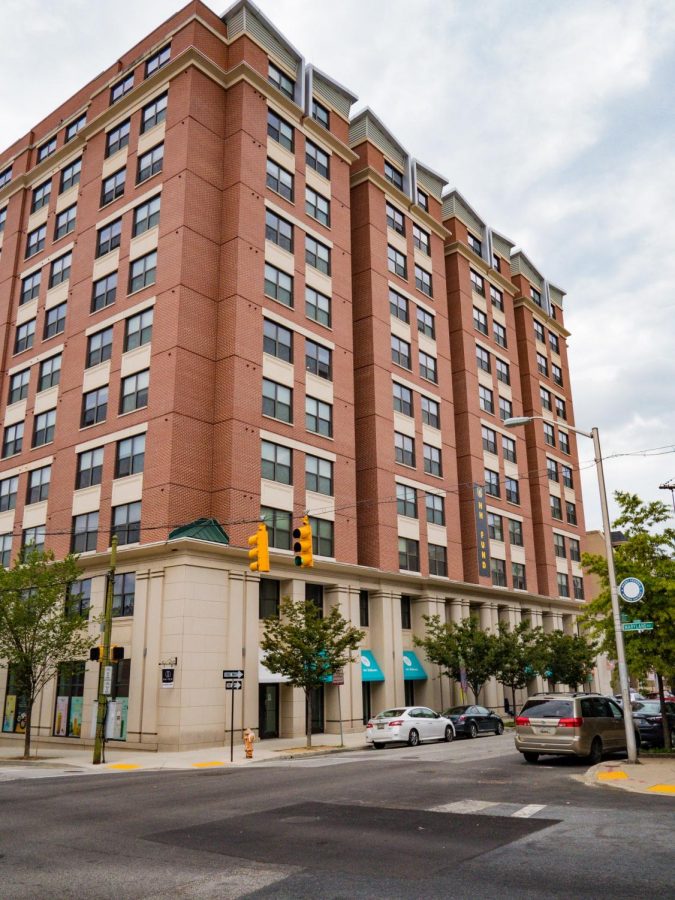 Sophomore and nursing major Aliya Conley received housing one week before classes began. The University gave her one option—HH Midtown.

When asked to explain the specifics of the email Conley received from Morgan’s Residental Life and Housing, she laughed and said she was given 48 hours to accept her housing assignment.

“Although I wouldn’t do it again—housing through Morgan, it worked out well. I can’t complain,” Conley said.

Commonly referred to as “The Varsity,” the development is located downtown— approximately 15 minutes from campus. The building offers a furnished studio, two-bedroom and four-bedroom apartments with a washer and dryer in every unit.

Housing assignments start at $4,226 per semester and for students who prefer to live off-campus, The Varsity is a safe haven.

“I like living here because it’s quiet and a convenient distance from campus,” Conley said. “I prefer living here over staying on campus.”

July 9, approximately a month before classes began, Morgan State University’s Board of Regents held a teleconference meeting. Kevin Banks, Vice President of Student Affairs reported the off-campus student housing options for upperclassman, but The Varsity was not listed.

Within one month, Morgan solidified its partnership with the complex and several students were notified via email that their housing assignment would be more than a 10-minute commute to campus.

Similar to Morgan View Apartments, The Varsity is equipped with a 24-hour fitness center, business lab and study rooms. To accommodate students without a vehicle, Morgan implemented hourly shuttles to transport its students to and from campus.

Sophomore journalism major Tariq Turner said while he likes living downtown, he has to wake up earlier than he would if he lived closer to campus to catch the shuttle.

A parking garage is offered to students at $300 a semester, more than twice the cost of a Morgan parking permit.

In light of the July shooting of business major Manuel Luis, the university made safety its top priority. Several security measures have been implemented as it relates to off-campus housing as Morgan works diligently to house as many students within the community as possible.

During the meeting with the Board of Regents, Vice President Kevin Banks said the newly anticipated on-campus residential hall will be located in the field adjacent to Thurgood Marshall Apartment Complex. Its expected date of completion is fall semester 2022.

“After the new housing is built, we will scale back on leasing space at Wellington and Kensington apartments and completely renovate Harper Tubman, Baldwin and Cummings hall,” Banks said. “Along with the possibility of tearing down O’Connell Hall which houses mainly freshman.”

The living spaces will be co-ed, apartment-style and offer single, doubles and quadruple bedrooms. While the specifics of the building have not been finalized, an in-house gym and dining faculty to further satisfy Morgan’s influx of students has been discussed.

In a recent video addressed to the Morgan community, President David Wilson said the university hired additional shuttle bus drivers and added routes to and from campus and off-campus housing.

“We increased shuttle stops and the size of the busses because we do not want [students] walking alone or at night,” Banks said.

Wilson said the university increased the security and foot patrol at Morgan View, particularly at the rear of the complex, increased the number of contracted public safety units that patrol the campus and have placed university police at the several the off-campus housing complexes, excluding Kensington and Wellington Gate Apartments.

In a similar case, Johns Hopkins University implemented the patrol of officers both on campus and at its hospital after the Maryland Senate passed a bill in April that allows the private institution to create its own armed police force of 100 officials.

“We have begun evaluating legislative solutions in order to change the statue that would allow our Morgan State University police officers joint jurisdiction to patrol areas not only on campus but areas that are off-campus to the university,” Wilson said.

Banks said while Morgan has not made a final decision whether it will continue its partnership with The Varsity, student feedback will be a major factor in the university’s decision as the construction of the anticipated residential hall begins construction.