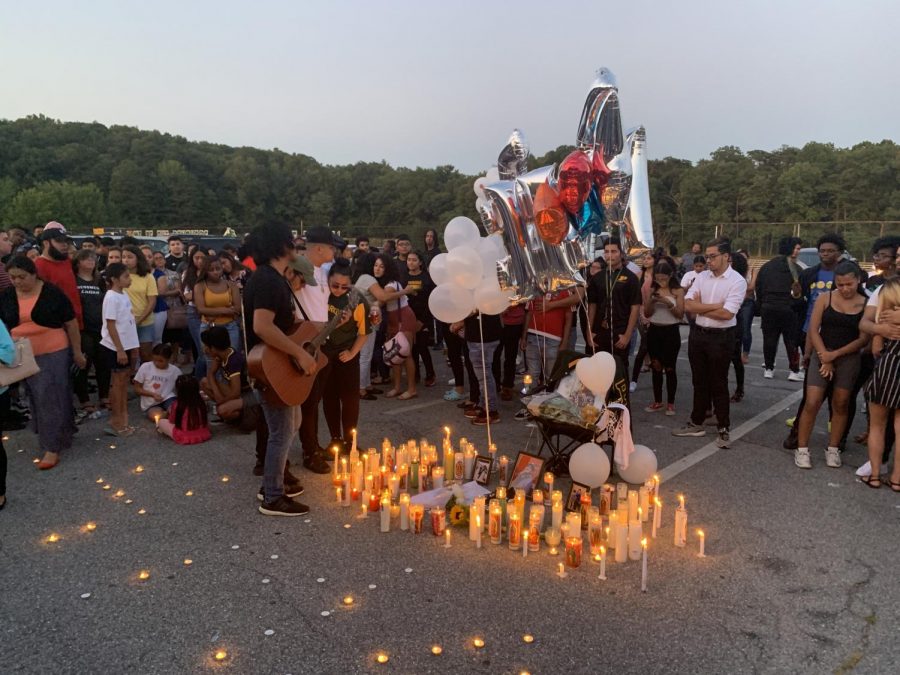 Manuel Luis' family and friends gather for a candlelight vigil in his honor.

This summer, business administration major Manuel Luis was a peer mentor along with multi-platform production major Cameron Potts and two-dozen other students.

“He was really energetic and was kind of like the life of the party,” said Potts.

As part of Access Orientation, the peer mentors perform various skits depicting different scenarios in college life. Potts smiled as he recalled the first skit he did with Luis.

Potts played the professor while Luis and two other mentors played disgruntled students who were trying to give the professor a hard time.

“Even with that in the scene, we had great chemistry,” he said. “I realized that he was beyond his years, it was hard to believe that he was just a freshman going into his sophomore year.”

Luis was described as “a student leader.”

Before his second year of college, the business administration major had assumed prominent roles in both the Student Government and Latino Student Associations.

Most Morgan students remember Access Orientation fondly—it’s an incoming freshman’s introduction to campus life—but for the class of 2023, it was a vastly different experience.

On July 11, Morgan State police received a call at approximately 4:45 a.m. reporting the sound of gunshots around Loch Raven and Cold Spring Ln.

Luis had been walking to his car after a game night with Potts and the other peer mentors at Morgan View, an off-campus student housing complex. He was in his vehicle, suffering from a gunshot wound when police arrived on the 4700 block of Loch Raven, according to an MSUPD statement.

He was pronounced dead on the scene.

Baltimore Police are looking for two suspects and are working with The Baltimore Field Division of the Bureau of Alcohol, Tobacco, Firearms and Explosives in an ongoing investigation.

In an email addressed to the Morgan community, MSU officials said that Luis was a victim to senseless gun violence.

“As a community, the Morgan family collectively extends our deepest sympathies and sincere condolences to the Luis family.”

Potts described the day of the announcement as a “very dark day.”

“It was quiet,” he said. “All you could really hear in the silence was crying and weeping.”

After that day, all of the peer mentors pledged to finish out their Access Orientation duties in honor of Luis—and they weren’t the only ones.

The Morgan community took to social media to express their sentiments.

“I’m going between the emotions of denial, sadness, and anger; I have never experienced a loss like this before,” said SGA public relations director, CJ Souvenir Jr. on Instagram. Souvenir and Luis worked together often in the SGA.

$11,857 was raised by the Latino Student Association for Luis’ funeral and memorial, surpassing their $6,000 goal.

Luis’ brother and Morgan student Alex Luis expressed his gratitude for those who donated on Twitter.

“On behalf on my family and I, Thank you all for your kind and generous donations. It really means a lot to us, and special thanks to LSA for organizing this fundraiser for Manny,” he said in a tweet.

“After that point on, we just made sure that we did the rest of the summer in his honor,” said Potts. “Even now as student leaders…we will, individually never forget [Luis] but collectively, we will definitely make sure that he won’t be forgotten.”