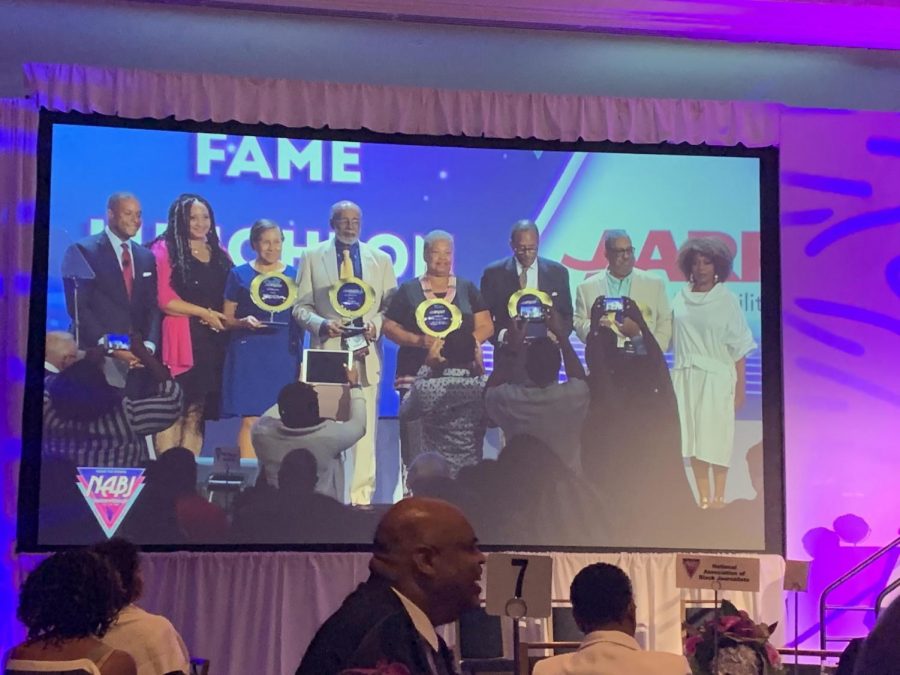 Honorees at the NABJ Hall of Fame reception in Miami

The awards were presented at this year’s convention in Miami, honoring journalists and media notables who have helped pave the way for current and aspiring media professionals.

Sheila Brooks, founder of NABJ’s Student Multimedia Projects and CEO of SRB Communications, received the 2019 Ida B. Wells Award for the impact she and the student projects have had on scores of students since they were founded 30 years ago.

Brooks is also chair of SGJC’s Board of Visitors.

Inductee Garry D. Howard, director of corporate initiatives at the American City Business Journals and a veteran sports journalist, is also a member of SGJC’s Board of Visitors. He was honored for a distinguished history as a sports journalist and news executive.

Ronald A. Taylor, an SGJC reporting fellow – usually seen in the Digital Newsroom helping students with reporting assignments – was honored as a member of the Metro Seven, a group of seven black reporters at The Washington Post who were the first to file a discrimination complaint against a major news organization.

The Metro Seven’s action predated lawsuits pursued by black and, later, women journalists against The New York Times. Both actions were settled out of court.

“We honestly loved The Washington Post but we did not love how we were being treated. A change needed to happen and happen fast. We never wanted money as the outcome of the complaint being filed, we just wanted equal opportunities,” said, LaBarbara A. Bowman, who was inducted along with Taylor, Ivan C. Brandon, Leon Dash, Penny Mickelbury and Richard Prince.