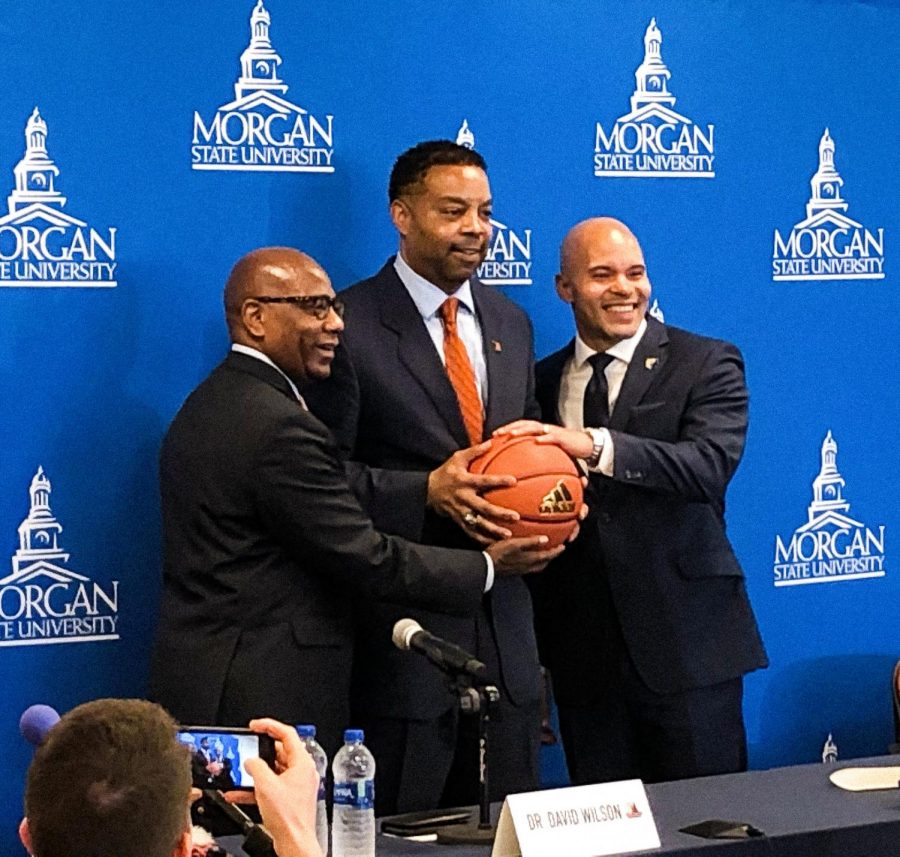 Edward Scott, Director of Intercollegiate Athletics, also believes Broadus will put the players in a position to succeed throughout their matriculation at Morgan and after.

“His intensity as a coach he believes in what he does and he does it with passion and at the end of the day I have no doubt in my mind that he will put our young men in a position to do well in the classroom, on the basketball court and most importantly when they walk away with their degree from Morgan,” said Scott.

In addition, Broadus was hired because members of the search committee believe he will have an immediate impact on the team’s success. Former head coach Todd Bozeman won championships upon arrival, but during the latter half of his career, the team failed to deliver a winning season.

Wilson stated that he does not embrace settling and the Bears cannot keep living in the past. He continued that they must look to the future and be prepared for it.

Broadus has been coaching for 29 years and has been a part of several different institutions. During his time at Binghamton, he led the school to the NCAA tournament in his second season with the school. Recently he assisted head coach Mark Turgeon for the Maryland Terrapins in leading them to the second round of the NCAA tournament.

The former Georgetown Hoya gained most of his coaching experience during his two separate stints at the school with then head coach John Thompson III who feels Broadus understands what it takes to be successful at Morgan.

In addition, not only does Thompson think that you’re not going to find a more experienced coach but also that Broadus’ coaching experience can’t be overlooked.

“Everyone talks about Kevin’s recruiting because he’s exemplary but he is a good coach. Every aspect of the game he was down,” Thompson said.

Members of the men’s basketball team were also present during the introduction of the new coach. Freshman guard Isaiah Burke stated his team is in a “good position” thanks to Broadus’ long resume of coaching experience.

“I feel like we’re in a good position because he had a lot of experience in the past and he’s won championships so he probably knows how to win a lot. I’m looking forward to working with him,” said Burke.

Scott also shared the belief that Broadus’ work ethic will help turn those losses into wins next season.

“He’s got practice scheduled today at three o’clock so that’s how fast he moves,” Scott said. I think that the style of play coach Broadus will bring it will be up-tempo, it’ll be press, it’ll be very intense, so you’ll see the win total increase next year and you’ll see a very exciting brand of basketball,” said Scott.

Scott explained that the road that led him to Broadus was a long one. He described the coaching search as “all-consuming” and he searched all around the country for a new head coach. One of the coaches considered for the job was Morgan alum Sam Brand.

Brand used to play for Morgan’s basketball team and now he coaches at the Baltimore Polytechnic Institute. While he’s been there, he has delivered multiple championships for the school. However, the search committee felt that Broadus was more qualified for the position.

“I think that Brand has a bright future and he has done a phenomenal job at Poly and cares deeply about Morgan. I think that when you look at the total package and look at Coach Broadus’s resume, you see he’s got not only the college assistant experience but also that head coaching experience,” Scott explained.

Broadus stated that although he is at a smaller school it will not be more challenging because “anywhere you go that’s worth it is going to be a challenge” but you have to make it work.

He hopes to make it work by “winning the right way” a sentiment he and Wilson both shared which means “being true to the game” according to Broadus.