The life and legacy of Nipsey Hussle 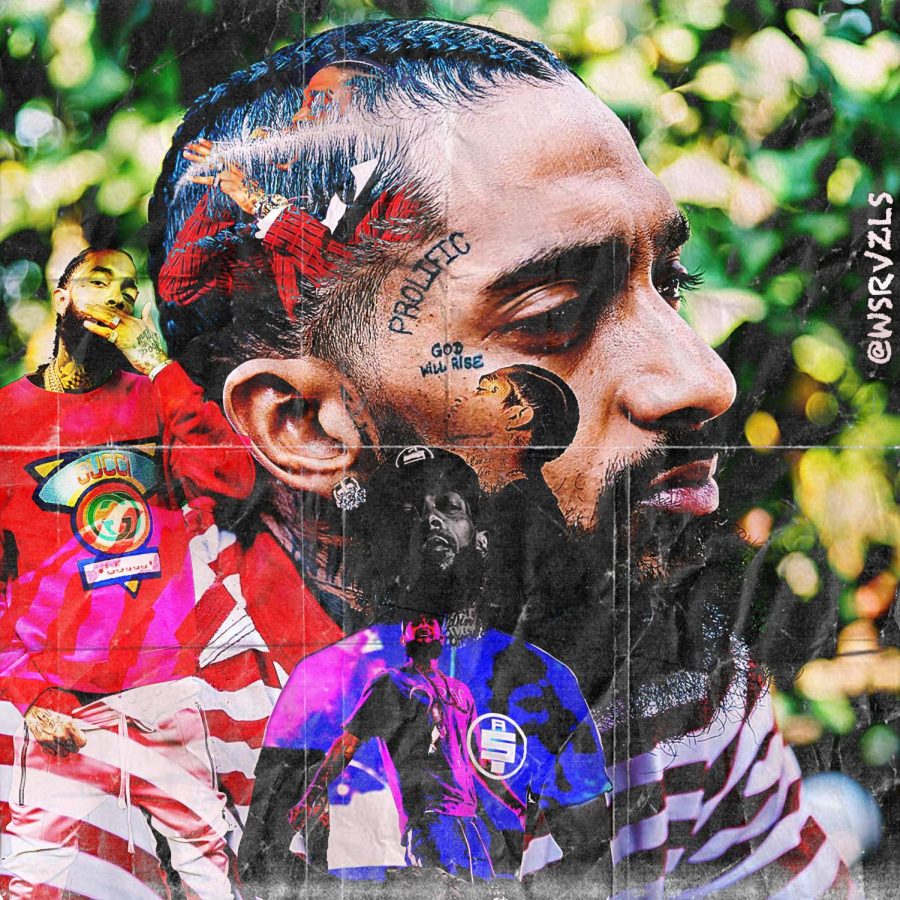 Graphic by Will Robinson

Ermias Joseph Asghedom, well known as Nipsey Hussle, was born in 1985. The Grammy-nominated rapper, entrepreneur, and activist was pronounced dead after a shooting outside of his clothing store Sunday afternoon, he was 33.

Hussle is of Eritrean descent but was raised in the Crenshaw Area of Los Angeles, California. He began recording music around 2005 and released a series of mixtapes which caught the eyes of a few major artists. His first notable collaboration was Killer featuring Drake in 2009. He also appeared on Snoop Dogg’s Malice In Wonderland the next year.

Within a decade he released numerous mixtapes and worked with artists such as Kendrick Lamar, YG, Rick Ross, Meek Mill, and Wiz Khalifa. Hussle’s music career began to surge when he released his Crenshaw mixtape. He sold each unit for $100. This distribution method gained popularity on social media and caught the attention of rapper and businessman, Jay-Z, who then purchased 100 copies of the mixtape.

Before distributing his mixtape Mailbox Money on music platforms he sold 100 copies for $1,000 each. In 1 of 1 Documentary on Nipsey Hussle Proud 2 Pay, Hussle explained how he was trying to prevail above controlling record labels which wanted to change artists’ creativity while gaining profit at the same time. The last project he released was his first studio album Victory Lap. The album peaked at #3 on the Billboard Charts in March of 2018 and is predicted to make a return to Billboard’s top 10 on the 200 charts.

Hussle was more than a rapper but a father, husband, businessman, philanthropist, and mentor. He is the father of two a son, Kross, and a daughter, Emani, from a past relationship. He was also in a longtime relationship with actress Lauren London.

London recently opened up about Hussle by sharing a series of memorable pictures with the caption, “I am completely lost. I’ve lost my best friend, my sanctuary, my protector, my soul,” she said in an Instagram post. “I’m lost without you. We are lost without you babe. I have no words.”

Many other celebrities have shared thoughts and prayers on the situation, and how they knew the rapper.

Hussle outside of rap made various investments such as a STEM program for kids in the Crenshaw district, a fish shop, a barbershop, a collaborative space, and The Marathon clothing store.

His business ventures included The Marathon Agency, which was a talent and marketing company for artists, and The Proud 2 Pay campaign, a distribution method for his music.

In addition to these efforts, he bought shoes for children in Hyde Park, renovated basketball courts and playgrounds, and sometimes provided for the homeless and funded funerals for families who lost family members to gun violence.

Hussle was scheduled to meet with the Roc Nation entertainment company, Los Angeles Police Department Chief Michel Moore and Police Commissioner Steve Soboroff  “to talk about ways he could help stop gang violence and help us help kids,” according to the commissioner in a tweet.

He had a trend of giving back and teaching many communities abroad. He lacked materialism and empathized helping out his people and keeping the black community as his focus with education on health, financial literacy and a bevy of other topics.

LAPD has identified 29-year old Eric Holder as the shooter. Holder has been arrested and is being held without bail.

Since the news, fans and neighborhood residents have celebrated Hussle’s life outside of his store.

Hussle left behind a legacy that was not completed. From his music to his efforts to improve the well-being of the African American community, his legacy and hard-work will not be forgotten.

The story previously published has been updated with corrections due to errors.