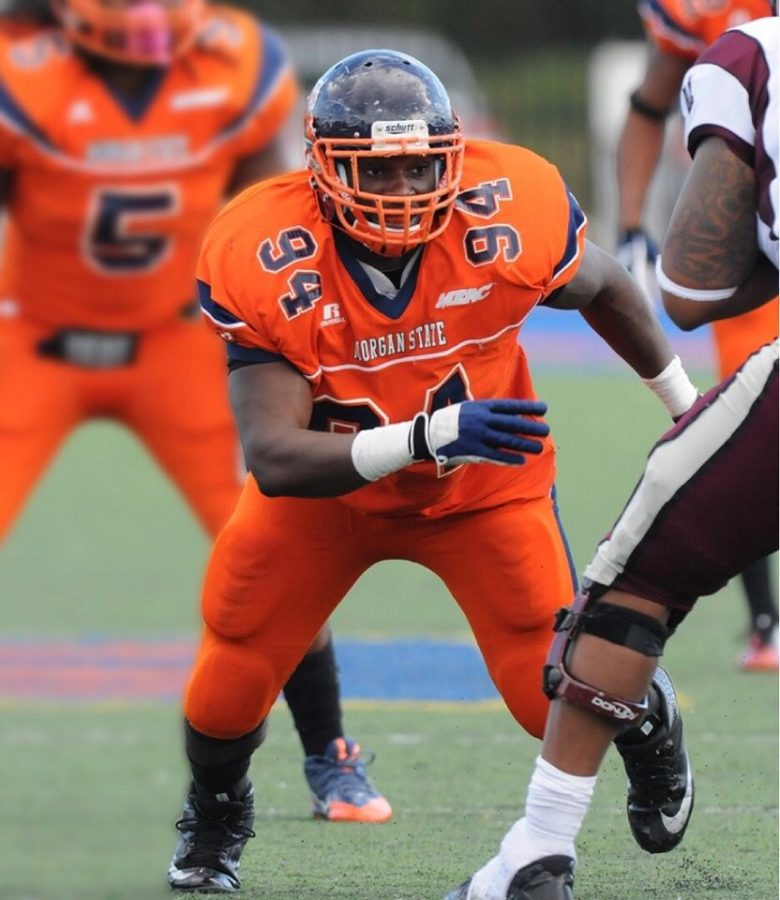 Micale Allen, 26, from Philadelphia, Pa., played football for the majority of his life. He began playing football at the age of eight after noticing kids playing the sport in the park. Since then Allen loved the sport.

Upon arriving at Northeast Catholic High School he trained and prepared his body for the physicality it would endure. Monday through Sunday Allen would train with the help of his father. After school, it was training, gym, then do it all again. During the weekends it was like a family session as siblings along with his father were with Allen during his training session.

However, at Northeast Catholic, he was not only a producing on the field but also producing in the classroom. Allen was member of the Student Government Association, the National College Football Foundation for Outstanding Leadership Athletic Success, and during his senior year, he was the first African American Class President.

His hard work on the field and in school led to him receiving a verbal offer from Villanova University. However, a week later they retracted their offer.

Though it was a blow to him he said several weeks later his coach notified him that Robert Morris University would like to speak with him after he was noticed on a teammate’s highlight video. After an official visit, he was offered a partial football scholarship. His time at Robert Morris was short lived however because of the lack of playing time for the Colonials varsity squad and the price of tuition.

In 2012, Allen would walk on to be a member of the Morgan State University Bears football team and in 2013 he received a full football scholarship.

Allen said of his decision to transfer to Morgan was one of the best decisions of his life.  In addition, Allen stated, “at Morgan [State] I was around people who actually cared about me and wanted me to be successful.”

His senior year, Allen was captain of the defensive line and a member of the leadership council that voiced concerns in collaboration with the head coach. The defensive lineman was also able to help lead the Bears to a Mid-Eastern Athletic Conference (MEAC) championship.

“I knew I could do both cause I wasn’t sure if going to the NFL was going to work for me but I at least wanted to give it a try,” said Allen.  “Football wasn’t my only focus.”

Unfortunately, that’s what happened to Allen. A year before winning the MEAC championship, the business administration major tore his meniscus. Once this happened, Allen knew he was not going to the National Football League (NFL). But, before this occurred Allen knew if he wasn’t going to play in the NFL he was going to work for the NFL.

Since Allen was a student-athlete, he could not take part in any sports internships because it was a conflict of interest during his matriculation. It wasn’t until he graduated that he was able to begin to try to break into the sports industry. But, it was not an easy road as he suffered through the depression of being rejected countless times before getting his foot in the door.

“It was a lot of times where I felt like giving up and times I felt like I wasn’t going to achieve what I wanted to be accomplished. A lot of nights I cried and didn’t sleep,” said Allen. “Sometimes I felt like a failure and I wasn’t doing anything with my life or it was going to take me forever to be successful.”

However, though it was challenging for him it also motivated him. At one point, Allen even drove to Canton, OH., to a hotel where NFL executives were meeting and introduced himself and handed them his resume.

Still, it took two years to finally land an internship and in September 2016 Allen’s perseverance led to him being accepted for a National Football League Players Association (NFLPA) internship.

During his internship, Allen did everything he could to set himself apart. He helped in other departments such as legal, accounting, and licensing and even partnered with another intern, Andrew Varga, to create a promotional poster about the internship.

At the end of his internship, Allen’s hard work led to him being offered another internship with NFLPA but this time in the accounting department.

Two months into his new internship he was told there was a full-time position opening and he should apply for it. With a lot of people supporting him at the job and even NFLPA deputy manager Teri Smith, Allen was able to secure the position he is in today as a Player Services Coordinator for the National Football League Players Association Inc. (NFLPAI).

As a Player Services Coordinator, Allen educates players on the business behind football and helps players maximize their likeness off the field.

Today, Allen still has the same mentality he had as an intern. Currently, he is working on the NFLPAI player camp program which continues to grow. In addition, Allen has worked with players such as Kansas City Chiefs quarterback Patrick Mahomes, New York Giants running back Wayne Gallman and Baltimore Ravens quarterback Lamar Jackson.

Allen, the first person to graduate high school on his mom side and second on his dad side, said he credits his success and the man he is today to grandad and father.

In the future, Allen wants to be an NFL franchise owner and president of a university.