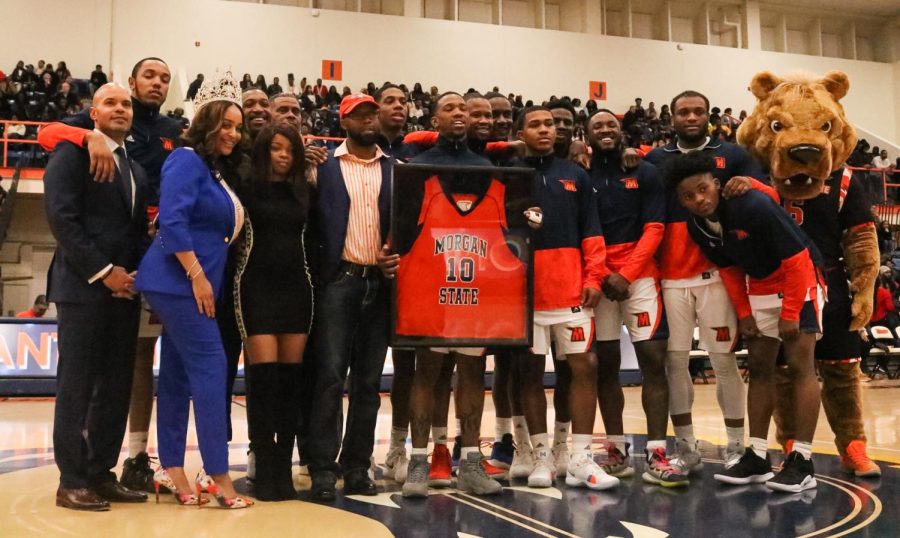 This is the 91st match up between the two schools. The battle of the East and West and Morgan leads the series, but with Coppin’s win tonight they swept the Bears this season.

Despite the loss, the night was special because it was senior night. This meant that this was the last time Martez Cameron, Antonio Gillespie and Tyler Streeter would play a game at the Hill Field House. The three would have a send-off ceremony before the game starts.

“You always appreciate guys coming in for four years putting in their blood, sweat, and tears. That’s what its all about,” said Bozeman.

Cameron, who led the team in assists this season, broke the schools assist record tonight. The record, previously held by Jason McCoy at 442, was broken with Cameron’s 443 assists. Although the team lost, he felt he accomplished something greater tonight.

After the game, Cameron reflected on his time here at Morgan.

“I love Morgan State. The Field House brings the best of the games and the worst of the games. It always feels good to play here.”

Streeter graduates in the spring with a total of 301 points for Morgan averaging 4.1 points per game this season. His best game came against the Navy where he scored 15 points. He also shot 100% from 3-point range.

The trio finished with a total of nine of points in this loss. This means that they will play Coppin again next week in the MEAC tournament. Although the game didn’t go in Morgan’s favor, they feel that they will be ready for the rematch.

“We’re going to see those guys again on Tuesday, but we just need to do a better job defending,” said Bozeman.

The Bears finish the regular season with a record of (9-20), and they hope to make a deep push in the MEAC tournament.