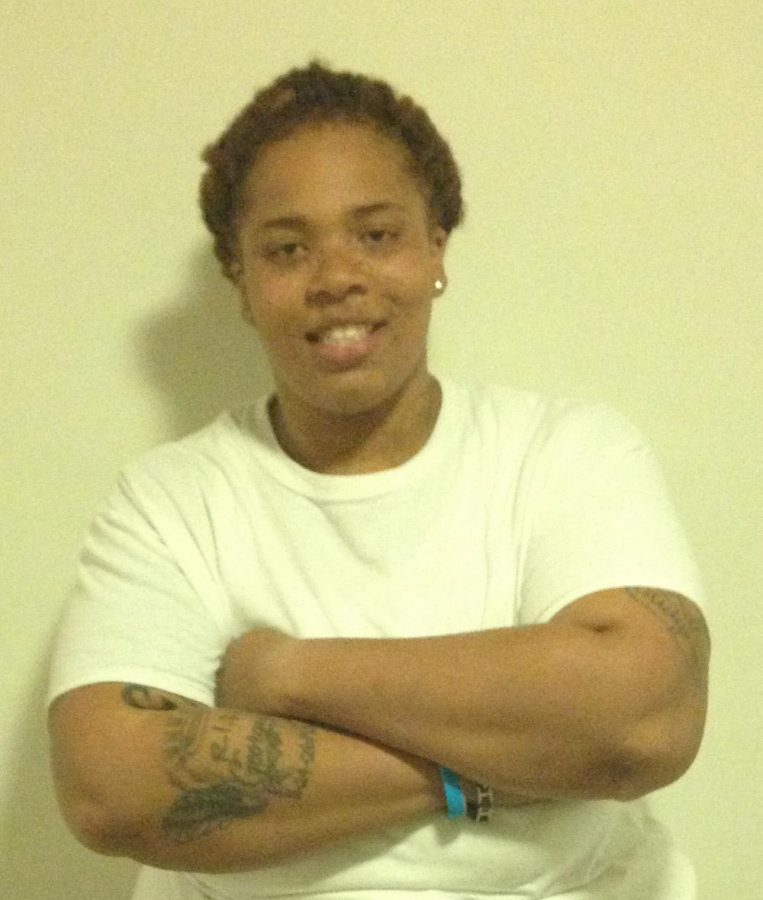 Maybe it’s the way she holds her head up high when she walks. Or it could be the way she looks a person directly in the eyes when she speaks to them. It may also be the way she smiles with her entire body and laughs with her whole heart. Whatever it is, Candace Walker oozes confidence from the dreads that fall all squiggly beside her freckled tan face to the fresh pair of Nike sneakers that style her feet. This type of confidence is a result of the hardships that life sometimes forces upon us, something that Candace knows all too well.

“I knew when I was younger, but I didn’t come out and accept it until I was a freshman in high school,” says Walker as she looks up at the ceiling of her Morgan View apartment room trying to recall exactly when she realized that she was a lesbian.

In the ninth grade, Candace developed a crush on her guidance counselor, something almost every school girl goes through in early adolescence. “I just thought she was the cutest thing in the world,” she says with a grin on her face. “I had to find a way to be in her office all the time, so I lied to her and said I had boyfriend problems.” Maybe it was just a hunch, but the guidance counselor didn’t believe the “boyfriend” excuse any more than Candace did. “She told me to come back when I really wanted to talk, and when I did, she started getting me exposed to [the gay lifestyle] and not being ashamed to be myself,” she says. “She was the one who motivated me and got me into knowing who I was.”

For most girls in their freshman year of high school, being themselves is one of the scariest things in the world. So many negativities enter the mind when one thinks of embracing differences in the face of others. For Candace, this was certainly true. However, it wasn’t the loss of friendships or the blatant examples of prejudices that she feared, but the disapproval of the person she loved the most, Darlene Noch, her mother. “I had to tell her,” she says as she sits in her room, shifting her eyes to the floor. “I couldn’t keep living the lie that there was a possibility that I was going to be with a boy… so I wrote my mom a letter. It was just a painful time for us. We didn’t talk…there was so much tension in the house.” Candace pauses and recalls the moment. Rearing back in her chair, she gazes off into her mind’s eye, only allowing herself a few seconds to relive the painful memory.

Today, mother and daughter are best friends. They catch up with each other on a daily basis and talk about the day’s events, never hanging up the phone before saying, “I love you.”

After overcoming what was probably the hardest part of coming out, all the other obstacles seemed to pale in comparison. Considering herself to be a devout Christian woman, Candace is no stranger to the religious aspect of the gay controversy. “In the Bible it says that rape, killing, adultery, wanting a thing that you can’t have – that’s a sin! But because I love the same sex, that just trumps everything,” she explains, throwing her hands up in frustration. With all animation gone, she raises a question and frowns, knowing that there is no logical rhyme or reason for it. “You can take a life, but I can’t love a life?”

The double XL shirt that hangs loose on her body, the black sweat pants that bag around her hips, and the lack of a feminine sashay when she walks often subject Candace to common lesbian stereotypes. Because she prefers sweatpants over jegging jeans, and fitted caps opposed to makeup, she has encountered something everyone will experience at least once in their lifetime: judgment with the eye and not with the heart.  “Everybody thinks that I’m trying to be a dude. I’m not,” she explains, rolling her eyes in frustration. “This is just me…why should I have to subject myself to an image of what a female should look like? I’d rather not.”

Years of being subject to prejudice for something she says she cannot help has made Candace walk a little taller, speak with a little more confidence, and smile for no reason at all. Through all the hardships, judgment, and tears, she’s learned that she is exactly who she is meant to be.  “I feel like [God] knows my heart and my mind, and that the person that I’ll become is the person he wants me to be,” she says as her smile returns, making her cheeks tickle from the wild dreads that linger on the sides of her face.

Now, in the midst of her second semester of her junior year, Candace plans to open community centers in her hometown of Philadelphia, Pennsylvania, to help the youth and give back to her community. Still, the woman that walks with the swagger of  unshakeable confidence slumps slightly at the possibility that the gay community will never really be accepted in America, a land in which everyone is supposed to be free and equal. “I don’t think it’ll ever be accepted, just tolerated,” she says as her back begins to straighten up once again.

Although the gay community may never be fully acclimated into society, this young woman doesn’t let it bother her too much. She has too bright a future, too many things to accomplish, and too many lives to touch. “The adversities against me are what make me strong.”