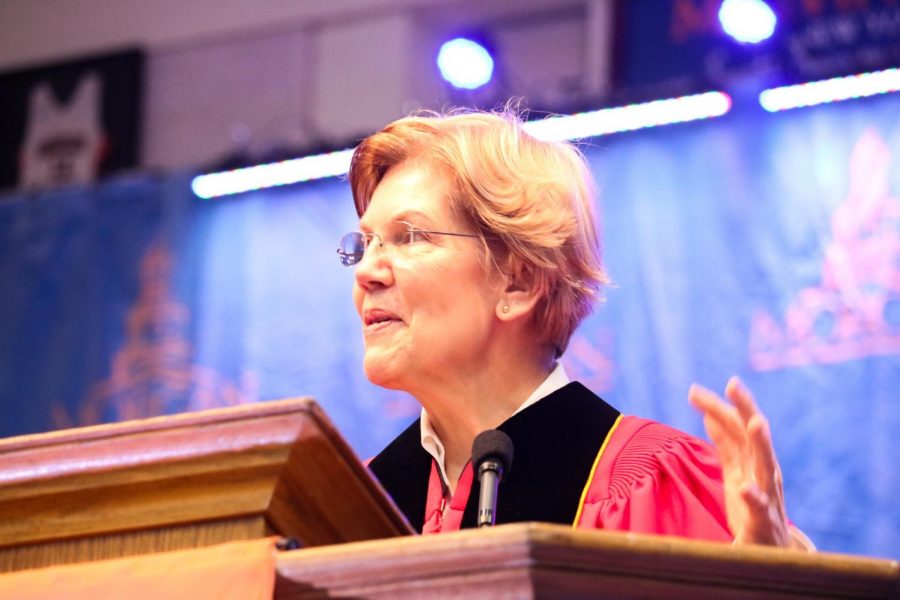 On Friday morning, Sen. Elizabeth Warren (D-Mass.) addressed Morgan State University as the 2018 December Graduation Commencement speaker and highlighted the responsibility placed upon the recent graduates as people of color.

Warren’s speech began with a story about her upbringing and family life growing up, and how that ties into her awareness of government affairs.

“Morgan State – what a great motto you have. Growing the future, Leading the World. That’s a lot of pressure to put on you guys,” said Warren.

“Especially right now. Especially when some of you may have partied too hard last night. I see you back there—already nodding off. Probably should have had one more cup of coffee this morning,” she said jokingly to those who celebrated the night before.

Warren’s upbringing in Oklahoma consisted of her father working various job, her three brothers joining the military and then her –– the “late-in-life baby.”

But after her father suffered from a heart attack, his survival meant he could no longer work and bills began to pile up, and the family struggled to pay them.

Warren described that her mother put on a dress walked down to Sears and she was hired with a minimum wage job. “That job saved our home—and it saved our family.”

The story is a part of who the Senator is, and, in that story, she learned about the government and how the rules of the government have such a great impact on how citizens live. When she was younger, minimum wage was enough to cover the basics for a family of three.

“Today, a full-time minimum wage doesn’t pay the rent on a median two-bedroom apartment in any state in America. That same kind of job that saved my family fifty years ago wouldn’t even keep a mama and her baby out of poverty today.”

She continued her speech by swaying into home ownership especially how that’s a different story for families that aren’t white. Acknowledging the country’s history with redlining and other illegal practices to make home ownership difficult for blacks.

“Houses are important. Sure, it’s a place to mount your diploma, or paint a whole bedroom blue and orange. But homes also matter for hard core economic reasons. As people pay off their mortgages, they build real wealth,” said Warren. “At least, that’s how it’s worked for tens of millions of white families. For black families, it was different.”

She explained that in the ‘90s, there were more black families buying homes and building wealth, but communities of color were targeted with the worst mortgages.

“Black homeownership rates are now lower than they were when housing discrimination was legal. Today, the black-white wealth gap is bigger than it was back in the 1960s.”

She also emphasized her identity of being a white woman and not living the life of a person of color. Highlighting to a crowd of mostly black graduates their struggle, and this comes weeks after Warren’s DNA test results of Native American ancestry.

Warren, who is rumored to run for presidency in 2020, exclusively discussed her stance on what the party should tackle legislatively with majority seats in the house.

“I think our first job is to get rid of some of the corruption in Congress and that means strengthening voting rights, it means that-so that our government is more responsive to people and it means that we outlaw practices that keep Washington working for the wealthy and the well-connected and not working for the people.”

She also talked about a new bill that is coming along that is a part of what the house plans to implement.

“That bill by the way is already starting to come together so I’m really excited about it. I have a big anti-corruption, the biggest since Watergate and it’s a part of what the house will be doing in their very first bill.”

Warren fully supports the funding of Historically Black Colleges and Universities within the government.

“HBCUs play a critical role in developing leadership in America. They have for more than a century fought for equality, and/in social economic and racial justice. It’s important that HBCUs be fully funded in our federal budget the benefits will pay off for the entire country.”

“It was very impactful and her speech it was very motivational because at this time everybody’s going through some financial struggle,” said Alestock. “I think that if she ran for president, she would definitely have our best interest at heart she seems like a very warm person who understands everybody’s struggle and she seems to have a broad scope of how everybody lives.”

Although, others felt that she could’ve worded her speech differently to leave a lasting impact on the graduates.

“I feel like it was very emotional as far as her story but when it came to different aspects such as connecting to the student body, I felt like it lacked a lot,” said Destiny Butler, who graduated with her bachelor’s in political science.

Warren’s lasting message to the fall graduating class of 2018 emphasized that, “hard work matters, but the rules matter too,” as she concluded.