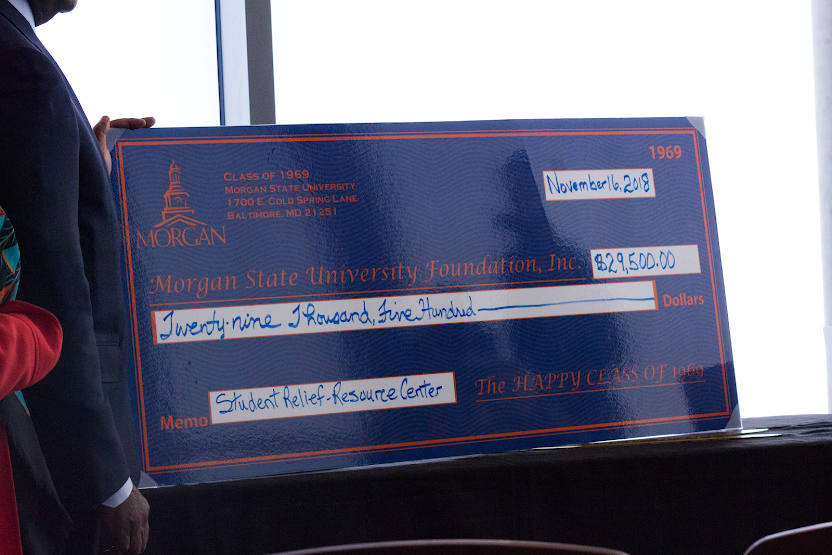 On Friday, the Morgan community congregated for the grand opening of the Food Resource Center located in room 213 in the Earl Graves School of Business and Management.  The idea was originally proposed last October by Senior Class Senator Samone Crews.

“It all really started my freshman year when my friend transferred from Clark Atlanta University. During that time, she didn’t have a meal plan because she was still getting her financial situation fixed,” Crews said.

It is not a rarity for college students to experience food insecurities.

Kevin Banks, vice president of student affairs, established a committee to help shape the project. In his opening remarks Banks said “Morganites do for each other.”

Jesse Bennett, a member of the Morgan’s class of 1969, donated a $29,500 on behalf of his class to the resource center in combination with the $500 donation from University President David Wilson.

Wilson said he experienced food insecurity during his undergraduate matriculation.

“There were so many days where I was so hungry I could not even think about studying,” Wilson said.

The goal of the center is not only to provide food to students, but to educate the Morgan community on healthy affordable eating habits. There are three preliminary steps necessary prior to receiving food: check in, complete a menu request form, and display a BearCard.

The Food Resource Center will have a variety of options including beans, canned vegetables, cereal, soups, and snacks.