Morgan State completes the shut out over DSU 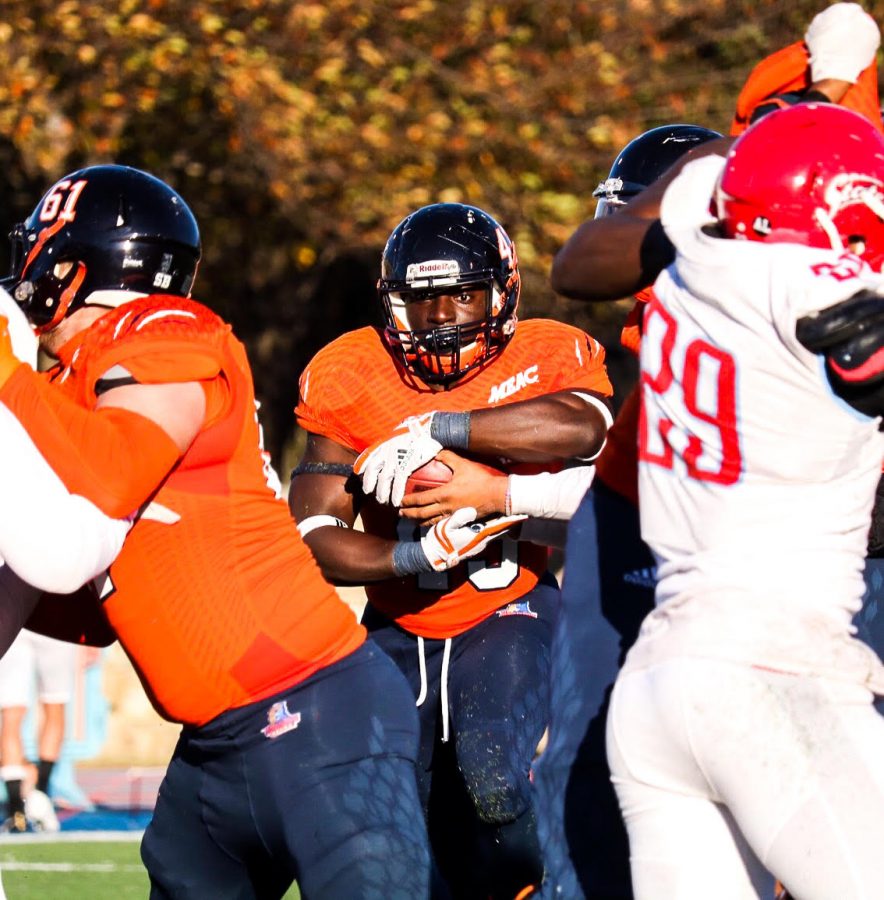 The Morgan State Bears (2-7) defeat the Delaware State Hornets (2-7) in their last home game of the season Saturday afternoon at Hughes Stadium.

Both Morgan and Delaware State opened the game with punts.

The game was scoreless at the end of the 1st quarter. The next Delaware possession, the Hornet’s worked the ball inside Bear’s territory. Pressure from Ian Mcborrough (No.5), forced Delaware to turn the ball over on downs.

The Bears couldn’t get anything going on offense, so their next possession resulted in another punt. The Hornet’s upcoming possession began at midfield and what seemed to be a touchdown catch by Austin Haverstrom (No.8) was negated by an offensive holding penalty.

With 8:30 to go in the 2nd quarter, the Bear’s offense came to life. Morgan scored the game’s first points with a 75-yard run by running back Joshua Chase (No.32).  Morgan failed to convert their 2-pt. conversion and the score was now 6-0.

Morgan went into halftime with the lead. Although both offenses seemed to struggle in the first half, the Bears found success in the running game. Morgan got the ball to begin the 3rd quarter and continued to run the ball. Chase, who scored the only touchdown of the matchup, was carted off with an apparent leg injury.

Following the injury, the Bears worked the ball into Hornet’s territory with back to back defensive penalties. The momentum seemed to shift when Delaware defensive back Nasir Adderley (No.23) got an interception.

The Bears defense forced Delaware to go 3 and out. After punts by both teams, Morgan found themselves backed up on their own 1. On 3rd down, Morgan completes a deep pass down the sideline to receiver Corey Holmes (No.3). The drive stalled, and the Bears settled for a field goal with 1:26 left in the 3rd.

The Bears would play defense on the ensuing drive and forced yet another 3 and out. After running the ball and getting rid of some clock, Delaware got the ball back with one last chance to put some points on the board in the 4th.

Their last gasp at hope came down to a 3rd down, and Morgan’s defense sealed the game with a sack fumble.

The final score was 9-0. Morgan hopes to keep their winning streak going when they travel to play Norfolk State next Saturday.