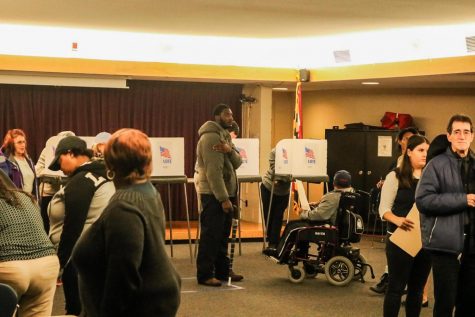 The inclement weather conditions did not deter voter turnout; the library opened at seven o’clock with 27 eager voters and by noon, 367 votes were casted.

Erika McGeehan, Chief Judge of Towson Library Precinct explained that the poll site usually attracts an even mix of female and male senior democrats. Residents of Baltimore County expressed their concern with the climate of the government and explained the significance of voting.

“If we want to achieve democracy, we must express our views and who we want to carry out our visions,” said Dores Kropp, retired Baltimore resident.

Although the location has attracted senior residents, college students casted their votes at the Towson Library as well.

“Voting is important to me because it’s a chance to make a difference. We’ve all come to a situation where we complain about what’s going on and we don’t like it, but we didn’t want to get up and do something. It’s time for us to start making a change at a smaller level.”

Erika McGeehan explained the importance of participating in both midterm and primary elections.

“It’s important to cast your vote anytime there’s an election because that’s your voce in politics, so when you want to contribute to society, this is the best time to do it. Speak through your vote.”