A new PBS special, Take On America, will air on Oct.18. 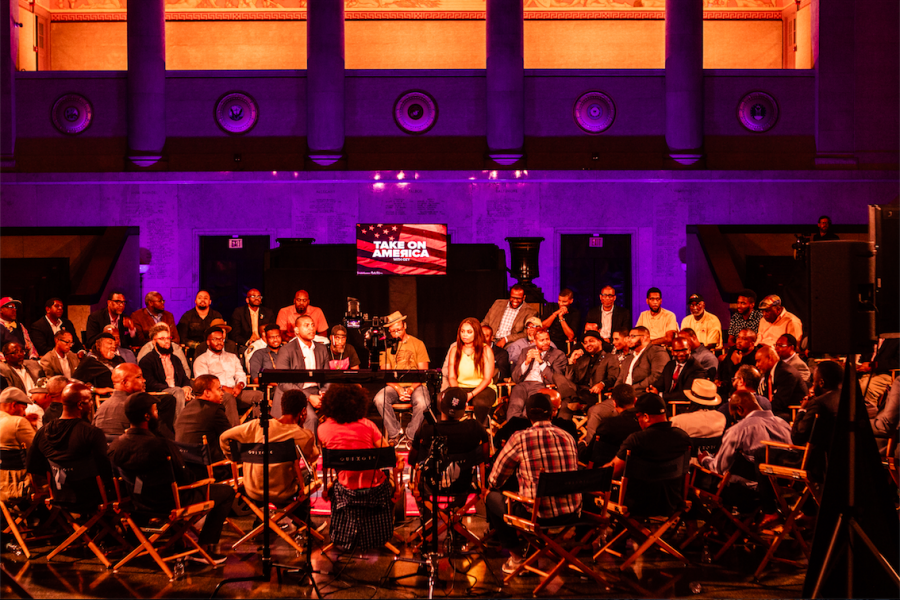 OZY Media filmed its first episode of its newest prime time television show, Take On America, in Baltimore where 100 black men had a conversation on relevant issues around the country that will air Oct.18 at 8 p.m EST on your local PBS station, YouTube or Facebook Watch.

Hosted by Emmy-award winning journalist and OZY co-founder Carlos Watson, Take On America will be a series that uncovers “the different perspectives among groups [around the country] who are often stereotyped for voting as a bloc, and reveal surprising views and diverse values.”

The panel will feature celebrities and political leaders, but each conversation will also consist of one hundred people from different demographic groups.

Lieutenant Colonel Sheree Briscoe and Robert Jackson, two members of the Baltimore City Police Department with over 24 years in the force, came not only as public servants but as concerned residents, and to potentially add to the conversation.

“I’m just looking to hear from everybody’s voice like what do you have to say. What I really want to hear is the voice and perspective of the person that I don’t see every day on the media, on the news. I want to hear what the residents have to say or some of the business owners have to say that I may not, or the officers of Baltimore City may not come in contact with. What’s their perspective?” said Lt. Colonel Briscoe.

She explained how the city is challenged with various issues and she hopes everyone can come together to work through those challenges to see another person’s perspective.

“One would be surprised just how much we have in common. People like to say you know kind of gender, race, ethnicity, profession divides but as a people we want some of the various same basic things. To hear that perspective from the everyday person that’s going to come into this room is what I’m most impressed to hear tonight,” said Lt. Colonel Briscoe.

Lt. Colonel Jackson who began his career in the police department in his teen years explained why he thought the conversation was important.

“I’ve been a member of Baltimore City Police Department since I was 18 years old. I’m born and raised in Baltimore so being here as a law enforcement officer and public servant I think it’s important. But also, I’m here as a person who has invested interest in this city as a resident and I’m happy to be here,” said Lt. Colonel Jackson.

As a black man he also found this conversation with other black men to be important.

Both Lt. Colonel Briscoe and Jackson have worked together since 2015 the year of Baltimore’s uprising after the death of Freddie Gray.

“There has been a tense and sometimes non-existent level of distrust between our people and the police that trust is a product of institutional racism,” said Hill. “With the changing racial elements of many police forces, some of that [racial inequality] has eased, but that doesn’t matter regardless of what color they are, if they are still behaving the way that system wants them to behave.”

According to Hill, this is such a wide-ranging discussion and it’s difficult to address it in just one conversation, but these are real concerns that black people, especially black men are having.

Hill referenced a Chris Rock joke and said, “There are certain professions where you can’t have a few bad apples –– they all have to be good. There is a different standard and expectation for someone who has the legal right to kill you.”

Watson particularly enjoyed that part of the show and wished there could have been more time to talk about the larger issue of police brutality.

“I loved it and I was really taken by so many of the conversations whether we were talking about fatherhood and you could just feel that energy and you could feel the power and the counter narrative which I thought was so important. I thought it was interesting how strongly people felt about Colin Kaepernick and how much conversation there was to have there,” said Watson.

Vance Brinkley, writer and Morgan alum, discussed why active participation was important for the event.

“I just wanted to participate in something that was actually meaningful to me a person as well as people like me in a sense. Mainly I came here to find some way to contribute to the conversation,” said Brinkley.“I want to be able to learn a little bit about the people in this room and I also want to learn about myself.”

OZY is a news culture and ideas site, and they found that a lot of their readers drew attention to politics and social issues than they have ever before.

“We thought what’s the right way to do it other than just putting more pundits on the air or more pollsters on the air. Well, we thought rather than putting stuff forth why don’t we get stuff back and why don’t we give a platform so we can hear from real people. That’s how it started,” said Watson.

Whether its talk surrounding Brett Kavanaugh’s confirmation, nuclear weapons or Black Lives Matter, OZY wanted to hear from different perspectives on topics like these happening around the country.

Watson also added that the series will run on a two-year span.

“I think between here and the November 2020 election this is going to be heated. There’s going to be a lot of drama, think about all the drama now and we’re not even close to a presidential election. Imagine what it’s going to be when we get closer and closer.”

OZY Media will continue these conversations around the country with the first four episodes listed below:

“We’re going to try to hear from lots of different people because we think it will be better that way. Then at the end we’re going to bring everybody together,” said Watson. “I hope in the end it will make people more open minded and more broad minded.”

There will also be a special Take On America podcast, with editorial highlights and commentary from each episode available on iTunes.