Dick Gregory: From John Edgar Hoover to the Pope 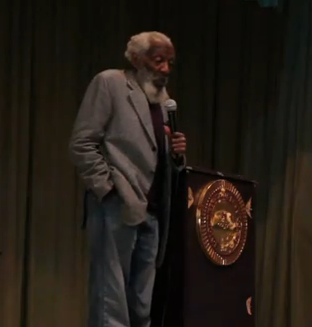 Civil Rights activist, author and comedian Dick Gregory called on African Americans at Sojourner Douglass College to start becoming more compassionate toward one another, pool together their resources and take a critical look at various controversial topics in the media.  A crowd of over 150 attended the community book signing and lecture sponsored by Solvivaz Nation, a black nationalist organization centered in Baltimore City.

“Every time we bring Dick Gregory to town, hundreds of people come out to see him. This has to be our sixth or seventh time doing this at Sojourner [Douglass College],” said Solvivaz Nation chariman Jabari Natur. “We just try to give him his credit before he’s gone. He’s 80 now, there’s no telling how long he will be here with us,” he continued.

Gregory has an extensive history of activism. From protesting in the Civil Rights Movement of the 1960’s to his condemnation of New York’s “stop and frisk” policy that led to nearly 700,000 stops in 2011, he continues to be vocal about important issues.

“They are picking a new pope and everybody wondered ‘is it going to be a black one?,’” said Gregory almost a week before the Vatican unveiled 76-year-old  Jorge Mario Bergoglio as the new Pope. “They put that out there and everybody starts saying it. Have you ever seen a black Cardinal?”

Gregory also said that the first head of the Federal Bureau of Investigation, John Edgar Hoover, had plans to have him “neutralized.”  “He suggested the way they do it was to give it [the order to kill] to the mafia because of all the bad things I say about abut the mafia,” said Gregory.

Gregory departed the auditorium with a few words to encourage the crowd.

“But when you realize who you are, then can’t nobody take you out. You wasn’t made by the mafia. You were made by the same universe that made everything.”