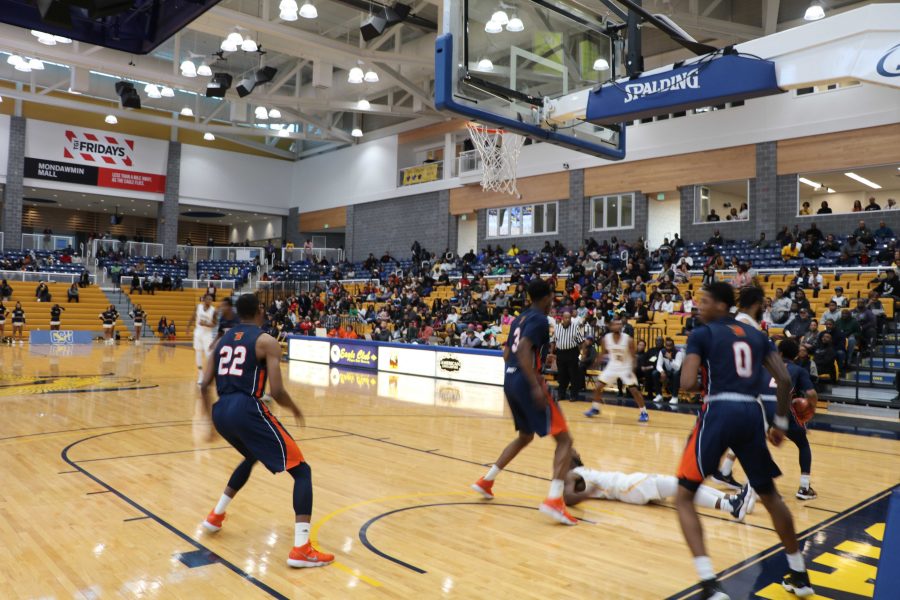 With the high expectations that the men’s basketball team are facing this season, they are playing like a team with a target on their backs. Every conference game has been a battle this year, with many teams playing to try to knock off the conference favorites. They have begun the Mid-Eastern Athletic Conference (MEAC) season with a 4-3 record and hope to build towards a championship.

Over the winter break the team opened up MEAC play with a comeback win over the University of Maryland Eastern Shore in early January. Here is a recap of the six games since then:

Florida A&M Vs. Morgan State, 87-68. The Bears hosted the Rattlers for their second conference game of the season. This game saw Morgan’s two star players combine for 67 points as the Bears pulled away with a 19-point win. Tiwian Kendley had a team high of 35 points and Phillip Carr added 32, as he only missed two shots from the field (11-13). The first half of this game was close with Morgan only leading by five at halftime. The team picked up the defensive effort in the second half, forcing FAMU into 18 turnovers, and coasted to the victory.

Savannah State Vs. Morgan State, 89-88. This was another close win for the Bears as they outlasted the Tigers in a high scoring, highly competitive game. The Tigers came out the gate strong and scored 59 points in the first to take a five-point lead into halftime. The high paced action fed into Savanna’s offensive attack. The Bears knew they had to slow down the game, and that’s exactly what they would did as they held the Tigers to only 29 second half points. Kendley, once again, led the team in scoring with 33 points. With 13 rebounds Carr lead the team and entered the Morgan top ten all-time in rebounding with over 600 for his career.

Morgan State Vs. North Carolina A&T, 69-67. After three straight home games the Bears took the show on the road to North Carolina to take on the Aggies. This was a battle of two teams that entered the day with a combined (5-0) record in conference. Morgan started out the game hot, taking an early 12-2 lead. That did not last long as the Aggies stormed back with a run of their own to take a 19-14 lead. The game was tight from that point on, and was tied at 37 at halftime. A&T did a great job a shutting down Morgan’s leading scorer Kendley in the second half. He only had two points after scoring 18 in the first. In the end the Aggies held on to their slim lead to finish with a hard fought two-point victory.

Morgan State Vs. North Carolina Central, 77-63. For the first time this season the Bears faced a team that could match up with their size. Central’s forward Rashean Davis lead his team in points and rebounds, as he and the Hawks dominated the paint against Morgan. The Bears lead by 10 early in the first, but it was short lived. They relinquished the lead and never got it back. At one point they were down 22 points but managed to get it down to 14 in the end. Kendley was once again leading scorer with 26, but no other Bear had more than nine points. Central came into the game as one of the better defensive teams in the MEAC, and their man-to-man defense caused issues for Morgan.

Morgan State Vs. Coppin State, 80-73. The Bears finished their road trip, with a visit to the crosstown rival Coppin State. The team was hoping to bounce back after couple tough games in North Carolina. This would not be the case as the Eagles played one of their better games of the season, to beat the Bears for the first time since 2015. For Coppin’s new head coach Juan Dixon he understood the importance of beating a rival.

The game was even throughout with many ties and lead changes back and forth. Clutch shooting from Eagles guard Lamar Morgan, who had seven three pointers, kept the Bears at bay. Kendley added 26, but only made one 3-pointer going 1-7 from beyond the arc. Morgan did manage a comeback and forced the game into overtime, thanks to two clutch free throws by Carr. In the end, it was not enough as Coppin pulled away with a 7-point victory.

Delaware State Vs. Morgan State, 61-47. The Bears returned to Hill Field House after a three-game losing streak to take on the Hornets of Delaware State. They played in front of a crowd of over 3000 students and fans. A two-win team was just what they needed to end the streak.

This game was a full team effort as 12 players logged minutes, the most all season. Balanced offense and smothering defense were keys to the win. Seniors Carr and Kendley scored 13 each to lead all scorers. Freshman point guard Kyson Rawls contributed 11 off the bench.

“We knew that we didn’t show well last game [vs. Coppin],” said Coach Todd Bozeman. “We definitely played with better energy and focus. The seniors had been playing a lot of minutes lately, so it was good to get the other guys involved.”

Carr recorded his 10th double-double of the season with 12 rebounds to lead the team. He is the leading rebounder in the MEAC this season with nine a game. This performance was a nice rebound for Carr who was coming off his worst game of the season at Coppin.

“It came down to better defensive effort,” said Carr, “this was probably the best effort in the last eight games. We have to stay disciplined on both sides of the ball, and remember that the most important thing is winning.”

Up Next. Morgan will host the South Carolina State Bulldogs on Monday January 29 at Hill Field House. Then they head on the road to take on the Norfolk State Spartans in Virginia on Saturday February 3. There are only four home games left for the Bears, so they must take advantage of the next few opportunities.