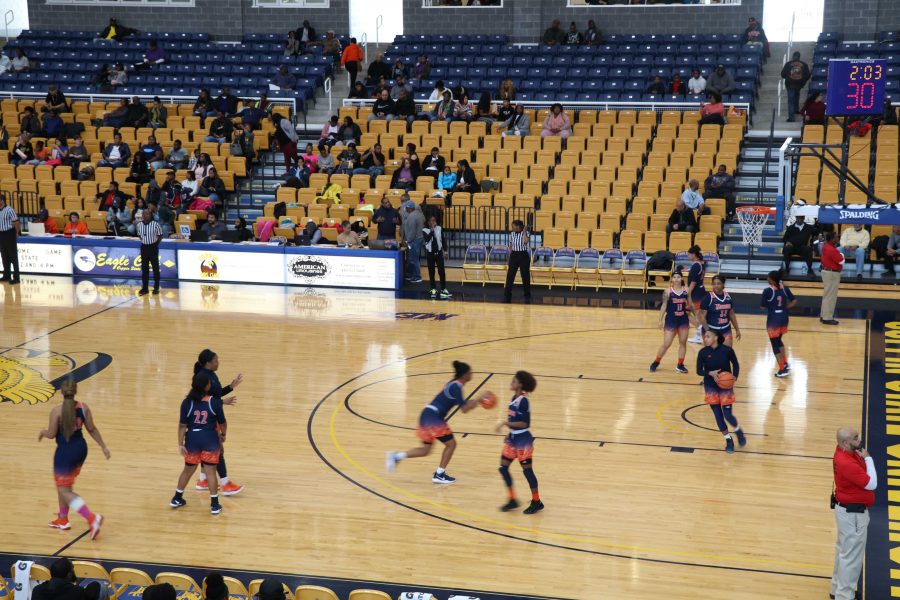 After the Morgan State Lady Bears came up victorious against Savannah State, on January 8, they went on to make a two-stop tour in North Carolina.

While on the road in the Tar Heel state, the Lady Bears dropped games to North Carolina A&T and North Carolina Central. The team returned to Baltimore to play cross town rival Coppin State on January 20, to conclude a three-game road trip.

The Lady Aggies put an end to the Lady Bears four game winning streak while extending their own against Morgan. The Lady Bears loss to A&T on Jan 13, becoming the seventh straight.

Adre’oina Coleman and Tykarah Williams led the way for Morgan each scoring 14 points. Williams also added seven rebounds to place her in the 500 Rebound Club at Morgan with 501 total for her career.

The Lady Bears shot 72 percent to the Lady Aggies 55 percent from the free throw line but A&T outscored Morgan 38-7 off the bench.

Morgan had its largest lead of the first half at 26-14 but ended the half up two. The Lady Aggies came out hot in the second half scoring the first five points to gain a 35-32 lead. Morgan ended an A&T 12-0 run and both teams were on the seesaw throughout the rest of the third quarter. Morgan trailed 45-44 at the end of the quarter.

A 10-2 run for the Lady Aggies sealed the victory and would go on to defeat the Lady Bears 67-60.

The last stop on the North Carolina tour was a trip to Durham to face the North Carolina Central Lady Eagles. Bears found themselves on the short of a competitive game against the Eagles and with the loss the Lady Bears fell four spots in the MEAC standings, falling from a first place tie with Bethune-Cookman to sixth-place.

The Lady Bears had one of their worst shooting performances as a team this season shooting 38 percent (24-for-63) from the floor including 5-for-21 from 3-point range.

Morgan looked to bounce back against cross town foe Coppin State, but a run in the final five minutes was all it took to give the Lady Eagles the boost they needed to hand Morgan their third straight loss.

Morgan was led by Braennan Farrar, who finished with 13 points and 11 rebounds to record her second double-double of the season. Lexus Spears added 12 points and six rebounds and Adre’onia Coleman finished with 10 points and eight rebounds for the Lady Bears, who held a 47-36 rebounding advantage. Spears is now 12 rebounds shy of reaching 500 for her career at Morgan.

Morgan held a 28-23 lead at the half and increased its advantage to 37-30. The Lady Bears held their largest lead of the game at 44-36 after three quarters of play.

Coppin’s Chance Graham hit a jumper at the 1:19 mark to even the score at 51 all. Farrar countered with two free throws with 55 seconds left to put Morgan State back ahead, 53-51. Coppin State came right back, and Maraiyah Smith scored on a layup to tie the game at 53 with 42 seconds left to set the stage for a pair of free throws to seal the game.

With the loss Coach Ed Davis’ team now rides a three-game losing streak. Going on the road to play two of the top three teams in the MEAC, then playing a rivalry game is tough even for a team like the Lady Bears, who has shown flashes of being elite in the early part of the season.

The Lady Bears (10-9, 3-3)  return to Hill Field House for a two-game homestand starting with Delaware State Jan. 22. Morgan will then welcome South Carolina State Jan. 29 for a matchup that will close out the first half of the MEAC schedule.