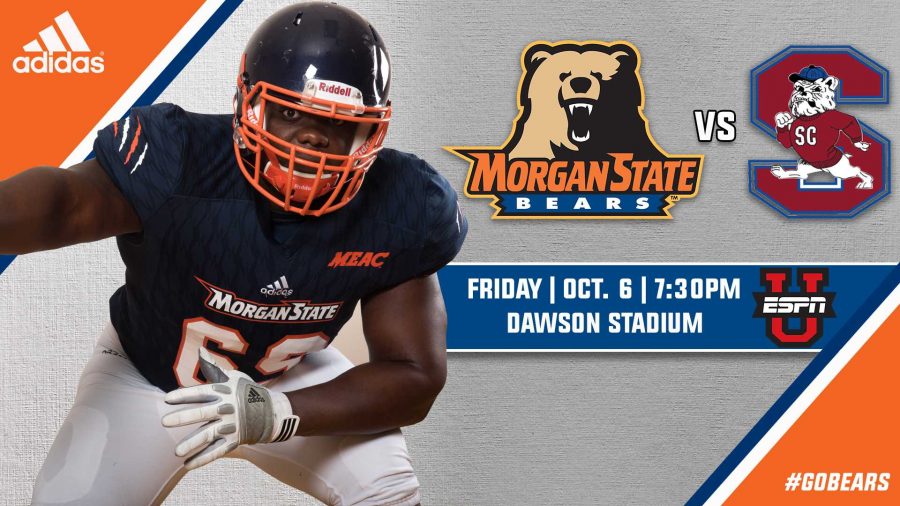 Fresh off a bye week the Morgan State Bears head into their second MEAC game of the season, as they travel to South Carolina State University for a Friday primetime matchup at Oliver Dawson Stadium.

The Bears are coming off a 49-17 home loss to #15 North Carolina A&T (NCAT) before the bye week. They look to bounce back from an 0-4 start to the season. The South Carolina State Bulldogs are 1-3 overall and fell to 0-2 in the conference following a 21-7 home loss versus NCAT last Saturday.

South Carolina State finished 2016 with an overall record of 5-6 and finished third in the conference with a 5-3 record. The Bulldogs offense is led by quarterback Dewann Ford, Jr. The 6-2, 185-pound signal-caller has completed 57-of-106 passes (53.8%) for 770 yards, three touchdowns and two interceptions . He also leads the team with 50 carries for 163 yards and two touchdowns.

SCSU’s defense will be led by 2016’s MEAC Defensive Player of the Year Darius Leonard. Leonard, leads the league with 43 tackles (10.8 pg), with 2.0 sacks (ranked T-No. 10), and four quarterback hurries. He was named to the Butkas Award Watch List that honors the nation’s best linebacker.

The game will kick off from Oliver Dawson Stadium Oct 6, at 7:30 p.m. and will be televised by ESPNU and also broadcasted on WEAA 88.9 FM.