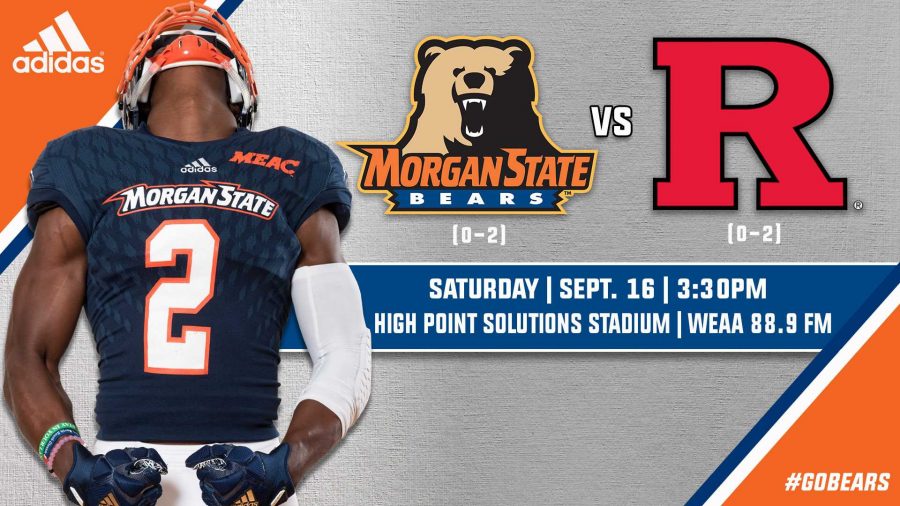 Morgan State University will take a trip to the Garden State to face Rutgers in a non-conference match-up Saturday, Sep.16 at High Point Solutions Stadium in Piscataway, New Jersey. The Bears go into this game 0-2, suffering losses from Towson and University at Albany and have been shut out in both games. The Scarlet Knights of Rutgers, also starting the season 0-2, look to rebound from their upset loss against Eastern Michigan.

Here are four things to take note of as the Bears enter the final non-conference matchup of the year.

The Bears defense has been lights out so far this season. The Bears have the sixth ranked defense in the FCS, holding opponents to 221.0 yards per game. The defense is led by senior tackle Jai Franklin. Franklin was named to the 2016 All-MEAC Second Team as a junior. Franklin was a force on the Bears’ defensive line where he finished the 2016 season with tackles, stops and four sacks. But this year, the force on the Bears’ defense so far has been redshirt junior linebacker Brandon Griffin. Griffin has recorded the most tackles on the team with 13. Trailing him is junior defensive back Darius Johnson with 10 tackles.

Transfer signal-caller Elijah Staley’s play through two games has been mediocre at best. Granted, it has only been two games and he’s still learning the playbook and still trying to jell with his receivers. But Staley has bad fundamental habits. His throws are a bit rushed, he often throws into double coverage and he throws off his back foot. Staley has thrown the ball 86 times for 355 yards, three INT’s and zero touchdowns.

One of the biggest concerns right now for the Bears in two games is the lack of production from the backfield. The team has the school’s single season rushing leader in Herb Walker Jr., but he has only rushed for 45 yards on 22 carries averaging 1.5 yards, while backup Eric Harrell has had 14 carries for 59 yards. Whether it’s the play calling or struggles on the offensive line, questions arise on Walker’s lack of productivity.

North Carolina A&T State University comes into Hughes Stadium for a Saturday night game Sep. 23 for the Bears MEAC opener. If the Bears lose to the Scarlet Knights, they would begin conference play 0-3 and will seemingly have no momentum as they play a solid Aggie football team.

The Morgan State versus Rutgers game will be televised by the Big Ten Network (BTN) and broadcast by WEAA, 88.9FM. Kickoff is at 3:30 p.m.