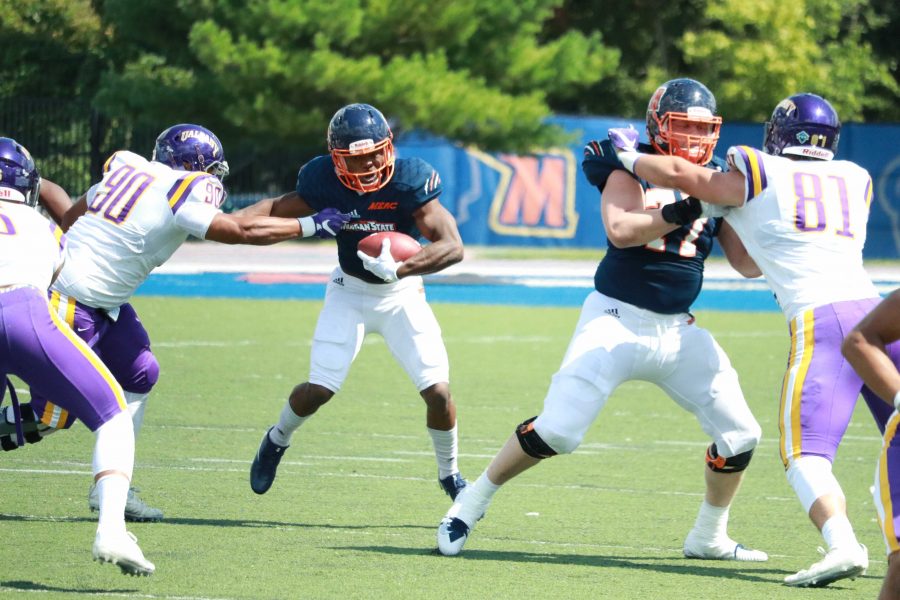 Despite a strong showing from the defense, the Morgan State Bears lost to the Albany Great Danes 26-0, Saturday at Hughes Stadium.

This year’s home opener was filled with few highlights for fans to enjoy, but here are seven takeaways from the Albany game.

Another zero on the board. For the second week in a row, the team failed to score points. It was another disappointing showing for starting quarterback Elijah Staley. He finished with 170 yards but was erratic with a 45% completion percentage. Even though he did not throw any interceptions, the Bears struggled to move the ball, going three and out five times.

Turnovers takeover again. There might not have been any interceptions, an improvement from last week, but the turnover bug was an issue again for the Bears. Two crucial fumbles were lost, one on a kickoff return. With the offense failing to convert first downs, the turnovers often put the defense in poor feild position.

Defense started fast… The defense continued their effort from last week, in the first half. They limited Albany to only seven points and five first downs early on, and kept the pressure on the opposing quarterback. They ended the game with two sacks and kept the Albany passing game grounded.

But in the end it slowed down. The defense eventually became tired due to the amount of time on the field. They lost the time of possesion battle by over ten minutes. Albany ran for almost 200 yards, but most of that came in the second half. The Great Danes took a commanding lead after a 16 point third quarter, putting the game out of reach.

“We didn’t see anythig that really surprised us,” said senior linebacker Eric Alvis Jr. ”we started out stong, but in the end we ran out of gas.”

Speaking of Eric Alvis Jr. One of the few bright spots of the game was the play of the senior linebacker. He finished with six solo total tackles and a sack. His performance comes on the heels of fellow linebacker Brandon Griffin, winning MEAC defensive player of the week. If the defense keeps getting performances like Alvis’ this week, and Griffin’s effort versus Towson, then they will be a force to be reckoned with in the MEAC.

Lack of running game. The offensive issues over the past two games can be attributed to the absence of a consistent running game. The team was held under 70 yards rushing, with quaterback Staley leading the team with 38 yards. Running back Herb Walker Jr. was again held to only 11 carries and has yet been able to break out like he did two years ago.

“We tried to make a commitment to running the ball early, said coach Fred T. Farrier ”but it’s tough to start behind the chains on second and third down.” The Bears gave up nine tackles for loss, often on first down running plays.

Looking forward. The Bears have a tough game next week at Rutgers(0-2), a FBS team from the Big Ten. The following week they return home to face North Carolina A&T, for their MEAC season opener. They were picked number 2 in the MEAC pre-season rankings this year, and will present another tough challenge to start the season.