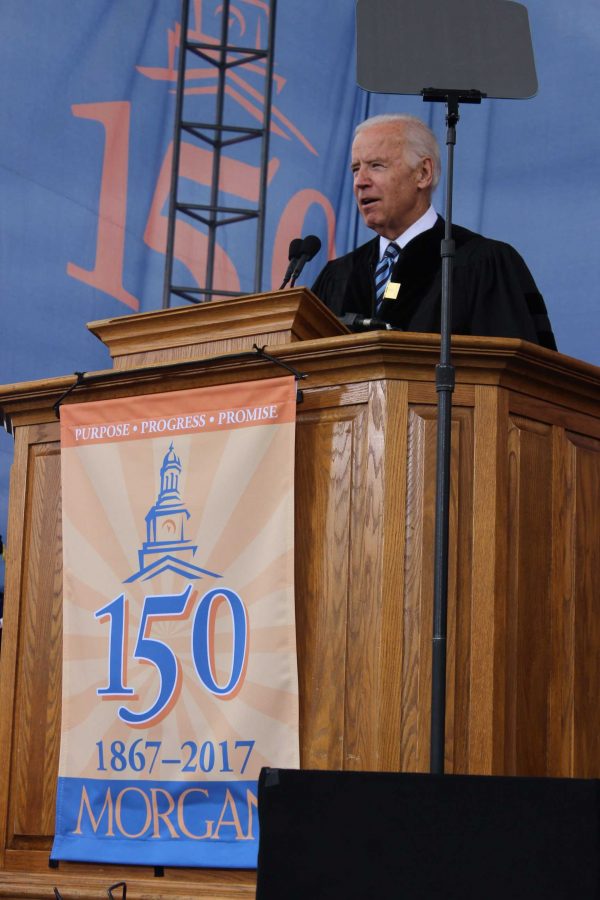 Morgan State University welcomed Former Vice President, Joseph R. Biden as the guest speaker for the 141st Spring Commencement ceremony. He was received with a rousing applause from the crowd of graduates and their families.

His speech began with a brief anecdote about how he first heard about Morgan, growing up in Wilmington, Delaware.

“I worked on the east side of Wilmington, I was one of thirteen lifeguards in the big swimming pool, and I was the only white boy… I used to have to sit there in the locker room and hear whether or not it was Grambling, or Delaware State, or Morgan State, it went on and on and on. I grew up feeling self-conscience I didn’t go to a [HBCU], I didn’t know what the hell was the matter with me.”

He first acknowledged all the friends and family that came to support the graduates and congratulated them for raising the students and reminded them they were due a pay raise because of no more tuition costs. Then he reflected on how giving commencement speeches were a tough job.

“I find commencement speeches the most difficult ones to give, for three reasons. One, you students just want to get the heck out of here and party. The faculty says, oh my God, this is my 71st commencement, Oh God make it short. And all you parents want me to say something significant.”

The former Vice President did not disappoint, his message for the graduates was profound and inspirational and only took a half hour. He touched on the school’s long history, including giving credit to Morgan’s pioneering sit-in demonstrations at the Reed’s drug store. Even crediting them for inspiring him to participate in sit-ins when he was in high school.

“Morgan State has instilled in you not only a sense of who you are as an individual, but pride in being part of the traditions and history of the black community in the United States of America. Morgan State teaches you ‘Take no mess’.”

Biden encouraged the graduates to remember the Promethean Walk, and the obstacles that were in the way then. Not only did they overcome them to finish the walk, they also reached the ultimate goal of graduation. He wanted students to reflect on the past to prepare them for the future.

Then he began to remember his time as the Vice President for former President Barack Obama. He spoke on the amount of time spent with him and the relationship and bond that was formed over the eight years.

“I know all those memes you guys did and sent out. But it is the truth we are the closest of friends,” said Biden. “I believe it is critically important as a nation to know, for all of our kids to grow up knowing that someone who looks like them can ascend to the highest office in the land and do the best job any president has done in recent history.”

The future under the current administration was addressed. He condemned the embrace of racism and bestowing legitimacy to hate speech that was used in the last campaign. He compared the election results to the candle being blown out during the Promethean Walk, and encouraged people to not get their hopes down.

“If you remember nothing of what I say but this, I assure you it is temporary and transitory, it will not be sustained! The American people will not tolerate it,” said Biden.

Although he did acknowledge that the barriers that we face are still a factor, he explained that the graduates are in the best position to break down the walls that hold them back as a society. The advance of technology and medicine are the tools that the next generation will use to solve the major problems that will face the future of humanity.

Biden concluded his speech with the story about the year he was first elected to the U.S. Senate. In a car accident he lost his wife and daughter, and his two sons were badly injured. He remained in his position while traveling back and forth from Delaware to support his family and maintain his responsibility to the people of his state. He used this story to convey his message that no matter the obstacle it pays off to persevere.

“There is an incredible amount of pressure on all of you to succeed,” said Biden, “Follow what you feel in your gut, that’s your North Star, trust it. To be successful and happy you have to be willing to run the risk of failure, in the service of what matters to you.”