A Conversation with T’Asia Muhammad 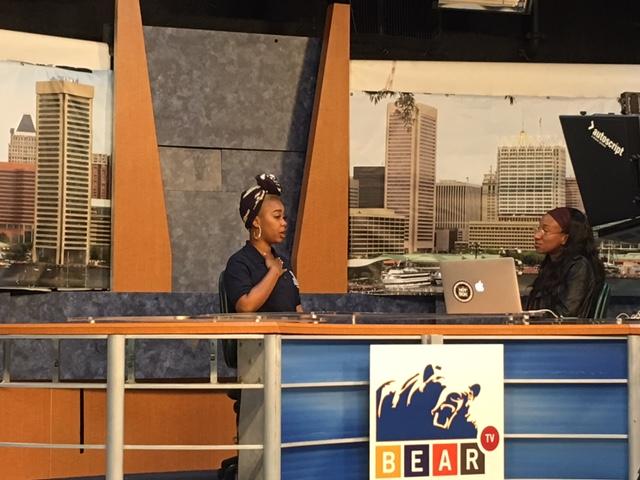 T'Asia Muhammad (Left) sits down with The MSU Spokesman's Zanha Armstrong (Right) to talk about her experiences in life and at Morgan State University. Photo Credit Tramon Lucas

T’Asia Muhammad, a transfer student who was born in Illinois, is currently running to be the next Miss Morgan State University. Should she win, Muhammad will be the first Muslim Miss Morgan. She aspires to be a midwife, a decision that came from her fascination with pregnancy and babies. I had the opportunity to have a conversation with Muhammad as she gave some insight on who she is and the path she took that led her to Morgan State University.

Zanha: Who is T’Asia Muhammad? Tell me about yourself, your childhood, what has made you who you are?

T’Asia: I’m from St. Louis Missouri. I was born in Shiloh, Illinois. [My parents] got married and had me when they were 21. So I’ve been Muslim my whole life, I’ve been brought up in the Nation of Islam.

I didn’t really start to accept it for myself until I was about 17. When you’re in the nation it’s more than just being in your religion, you have to make a stand for a faith and be a registered member of the Nation of Islam. So I became a registered member when I was 17 years old, I’ll be 23 years old in August, so it’s been a minute and I’m definitely thankful for the experience.

Growing up, I went to a lot of predominately white schools. I remember when I was in first grade I was the only black person in my entire grade. So the teachers, they were so racist. My teacher wrote me up like everyday. I definitely experienced racism with Caucasians, but never really with black people.

So I finally started wearing my scarf, which was my junior/senior year in high school. What actually happened was my hair wasn’t done so I was wearing a hat, and you know in high school you can’t wear hats or whatever. So, for whatever reason my hair wasn’t done so I tried to tell my principle ‘No I need to wear this cause I’m Muslim, I need to wear my hair cover.’ So my mom was like ‘Oh you’re trying to use this as an excuse. From now on you’re gonna wear your scarf to school everyday.’ Also, I had just cut off all my hair, and this was about six months to a year before the whole natural hair movement was a thing. People already talked about me before that, so that just gave them more reasoning to.

But I was thankful for that experience. Everything happens for a reason.

Z. How did you find your way from Illinois to Morgan State University?

T: The Nation of Islam is more like a family. Like being in the nation, along with social media has allowed me to connect with people all over the world. It’s so much networking. So, I wasn’t really sad that I was leaving. I was but I wasn’t because I knew I had the Nation of Islam and I still had friends from school.

Howard was my dream school, I’m not gonna lie. But when I saw that tuition, nope. But I knew I wanted to go to an HBCU and I determined which one I was gonna to by the mosque in the area. In the nation, we have different mosque, like I’m from mosque #28 in St. Louis.  Depending on the size of the mosque, if it’s small, it’s considered a study group because they don’t have their own building. Some rent and some own. So the one here in Baltimore, #6, they own their own building. So I knew I wanted to go somewhere on the strength of the mosque.

I was talking to a guy who’s in the nation and he went to Morgan and so that’s how I learned about Morgan. My sister, we grew up together and our parents are close so I call her my sister, had already applied to Morgan and got in. So I was like let me just apply to Morgan because I am not staying at home anymore. So I applied, I got accepted, the tuition wasn’t that much. I already knew people here. So I just feel like it was meant for me to come here.

Z: What inspired you to run for Miss Morgan State University?

T: I told myself, I live 836 miles away, I’m gonna go to Baltimore and I’m gonna try my hardest to make an impact. No matter what it is. When I first got here I helped organize the Justice or Else March. Going out into the community and handing out flyers. We need to bridge the gap between our institution and the community. I feel like it’s really easy, but we just have to want it.

You may not like Baltimore, but you have to remember your school is in Baltimore. Your school is in this community. We really have to make sure we’re bridging the gap. This is bigger than ourselves. “Stand Up MSU” is about standing up for what you believe in, whether it’s big or whether it’s small and whether you’re backed by a thousand people or you’re by yourself. As black people, especially young black people who go to an HBCU, we have to stand for something. We don’t have time for people to make decisions for us, especially with a president like Trump.

Z: What is your fondest memory of being a Morgan State student so far?

T: I like to see when the student body is receptive to things they normally wouldn’t be. When minister Nuri Muhammad came, and even when Umar Johnson came, I was happy that people were going off. They weren’t scared to say ‘I don’t agree with that or I don’t believe in that.’ We just need to be more consistent with it and then we’ll be more successful.

The Mister and Miss Morgan Pageant is Tuesday, April 4 at 7 p.m., while voting begins on the same day.