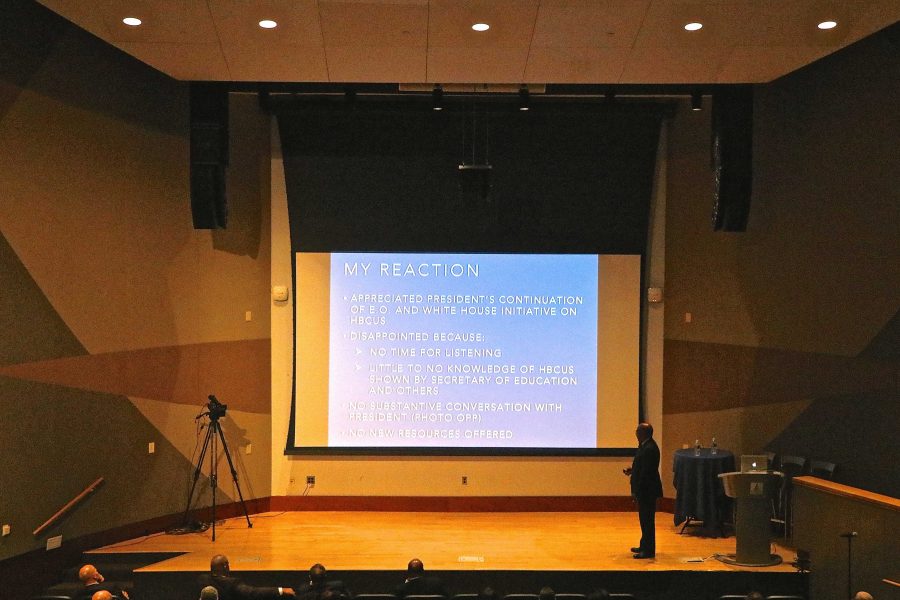 The meaning of a photo can often be more powerful than the words that accompany it. Many people in the African-American community were upset by a certain photo this week involving the president of the United States.

President Donald Trump met with many HBCU leaders on Monday, including Morgan State University president David Wilson. The plan was to meet with the president about his proposed executive order involving HBCU’s. It turned into an unproductive event that ended up being a glorified photo-op.

The picture quickly became viral along with criticism for the leaders for what they felt was just publicity for the president. He has had a recent history of meeting with influential African-Americans just to better his cause. Luckily this school’s president wanted no parts of it.

Wilson did not attend the actual signing of the executive order on Tuesday, mainly due to the lack production and sincerity of the events the day before. What was supposed to be a “Listening Session” for all the leaders of the different schools, turned into a 15-minute talk for only a handful of HBCUs.

On Thursday, Wilson addressed these issues during his town hall meeting with students and faculty. He used a portion of his presentation to explain what he did to prepare for the meeting, what occurred during it, and his reaction afterwards.

“I was disappointed because what was billed as listening never occurred in a substantive way…there was little to no knowledge of HBCU’s shown particularly by the Secretary of Education and others” said Wilson, “I was very disappointed in what I heard, and created if you will this window which says we have a lot of work to do.”

Wilson reached out to different Morgan constituents before he made his decision to go, which included students, faculty, and alumni. With an overwhelming majority, everyone agreed that he should have gone to the White House. He did not regret going to the event but just wished that they got a chance to have an important conversation about the future of Morgan and other HBCUs.

“I was one of the student leaders that Dr. Wilson met with before the meeting,” said junior Marcus Bennett. “In retrospect’s he said he wouldn’t have went and we wouldn’t have been so openly willing for him to go to represent the university.”

In the end, many students didn’t mind the visit to the white house by President Wilson, if they could voice their concerns directly to school leaders.

“I actually believed that he should go, just to address some problems and concerns that Morgan students have strongly voiced. Obviously, he wasn’t able to do so which is very unfortunate,” said junior Tonaeya Moore.

The rest of the town hall included many students asking questions about the current state here at Morgan. Many different topics were discussed from infestation issues, to the lack of support felt by Morgan’s students with disabilities.

Wilson made it clear that there has been an abundance of campus improvements. Regarding campus security, a hot topic among the Morgan community as of late, hundreds of surveillance cameras have been recently installed. There are also plans to install an enclosure to make the Thurgood Marshall Apartment Complex less accessible to people who don’t live there.

The new Martin G. Jenkins Behavioral Science Building is set to open in the summer and officially begin to hold classes in Fall 2017. The building will also be home to the second largest academic auditorium on campus, accommodating 180 people.

Wilson also provided updates on the new administrative services building, which will take the place where Soper Library used to stand.

“We are looking to break ground in the summer on a building that we are proposing to be named Calvin and Tina Tyler Hall,” Wilson said.

Many other planned upgrades were highlighted on the evening, such as renovating Hill Field House, putting a jumbotron in the football stadium, and bringing Zip Cars to the school, all which Wilson hopes will enhance the student experience at Morgan.