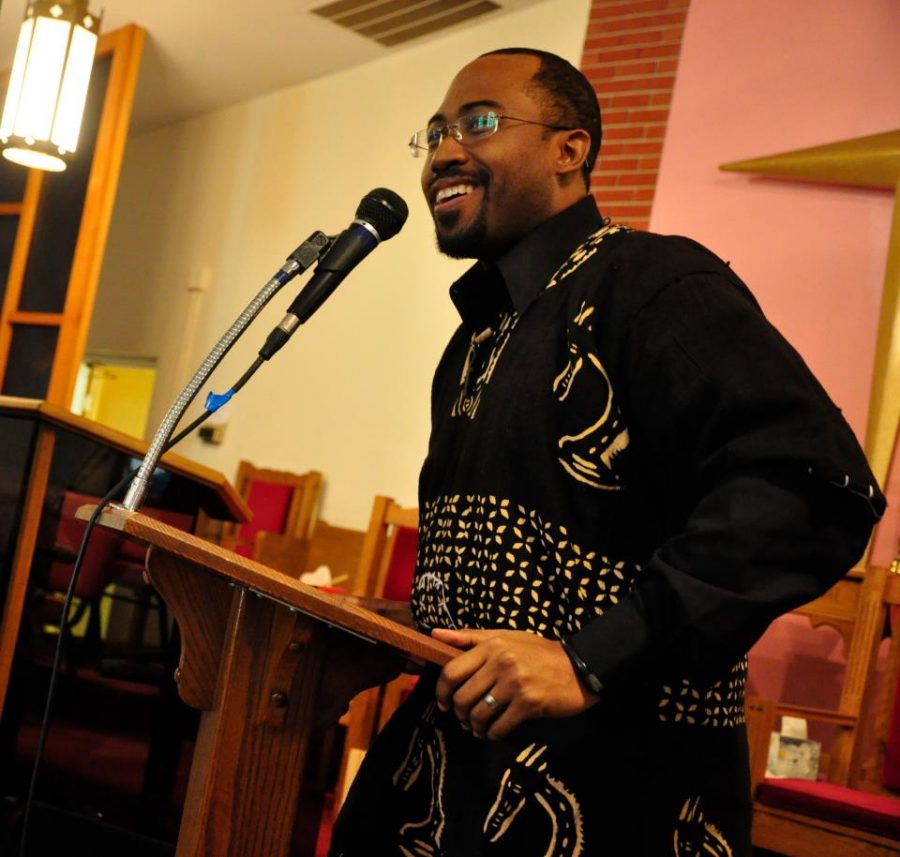 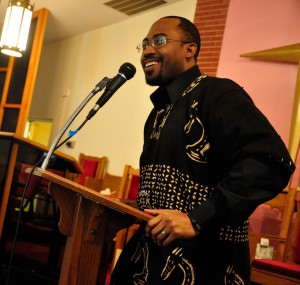 Sitting in a room with fifteen clergy members, referencing notes from his tablet, and quoting rap lyrics to make his ideas clearer, Minister Heber Brown III leads the weekly senior Bible study at Pleasant Hope Baptist Church. His discussions revolve around various topics, including the importance of speaking the truth even when it isn’t popular.

“Galileo was locked up because he dared to suggest that the planets revolved around the sun and not around the earth,” said Brown, as he sat at the head of the table, in front of a green chalkboard with a partially erased scripture. “He challenged absolute truth and was incarcerated until he died.”

Brown, a 33-year-old married man and father of two, has been serving Pleasant Hope Baptist Church for nearly five years. In that time, he has grown into a prominent evangelist and courageous activist.

“We see the church as an anchor institution in our community,” said Brown. “Regardless of what you believe, there is no doubt that the church has a long history in supporting and advancing our community.”

Just 3 miles away from his church, Brown received his B.S. in Psychology in 2002 from Morgan State University. Three years later he graduated from Virginia Union University with a Master’s degree in divinity. He is now attending Wesley Theological Seminary in D.C. and plans to receive his Doctorate of Ministry in May 2014.

He’s a simple, casually dressed minster with a warm smile and eyes that squint when laughing. His pleasant personality and warm demeanor is what brings out nearly 130 people to each Sunday church service.

“I’ve been in church all my life and I’ve never gone to a church service that was functionally like an open mic,” said Brion Gill, school teacher and member of Pleasant Hope Baptist Church. A friend introduced her to the church. On her way to her first service, she received a last-minute phone call requesting her to perform.  She initially considered passing up the opportunity but ended up doing it.

After that, she was invited to to create her own “Poetry as Praise” program in 2012, which brought local poets and spoken word artists to the church to recite their work.

Though his profession puts him behind a pulpit, like Che Guevera and Harriet Tubman, whose pictures hang on his office wall, Brown is not just talk.

He has taken his religious discussions on the prison industrial complex and the inadequate funding of Baltimore City Public Schools and established a social justice committee at his church to address local, national and global issues.

Brown has partnered with groups like Leaders of a Beautiful Struggle, The Baltimore Algebra Project and the Stop the Youth Jail Alliance, to protest  the building of a proposed, state of the art youth jail. Finally years of organizing around the effort to stop the construction of this jail in downtown Baltimore, the Afro-American newspaper reported in January that the $70 million, 120 – bed jail would no longer be built.

Even after that major success, Brown isn’t satisfied. “We feel pretty confident now that we’ve crossed that finish line,” he said. “The second phase is that we have to pass the baton and make sure that money doesn’t just disappear. We need that money now to invest in our community.”

Nurturing the skills of his congregation and community members, Brown wishes to build something of his own at his church, a recording studio. “We have a lot of talent at our church,” said Brown. “I just want a way, especially for the youth, to go and produce and record their talents in a professional way,” he explained.

“In a quantitative, substantive way, it’s hard for me to see significant differences between an Obama presidency and a [George] Bush presidency,” said Brown. “President Bush came nowhere near using drones like Obama is using drones in places like Pakistan and Yemen. The number of civilization casualties that are piling up under this president is extremely problematic.” Lindsey Graham, Republican Senator, recently announced that the death toll caused by drones is 4,700.

“I feel like he is a strong guy for some of the stances that he takes,” said Jabari Natur, activist and master barber, who met Brown at a rally in Baltimore around 2008. “He’s the new-age Martin Luther King. He took a stance on the jail and many other issues throughout the community. He is putting in the work and he’s probably just getting started.”

Natur is right. Brown is just getting started, but his bravery and dedication has not been overlooked. He is the recipient of numerous awards, including the Kingdom Ambassador Award, the Ella Baker Freedom Fighter Award and in 2007, The Afro American named Brown as one of the “25 Under 40 Emerging Black History Leaders.”

In the future, Brown wishes to model his church after former Reverend Jeremiah Wright’s church, Trinity United Church of Christ, a predominantly black church in Chicago with over 8,500 members.

Like Wright, former pastor of President Barack Obama, Brown wishes to incorporate Afrocentric theology into his sermons and continue to give Jesus a revolutionary stature in history.

“Our orientation as followers is challenged to be towards what Christ said. Christ was killed because he challenged the cultural, popular, and social understandings of that time,” said Brown, nearing the conclusion of his church’s senior Bible study.