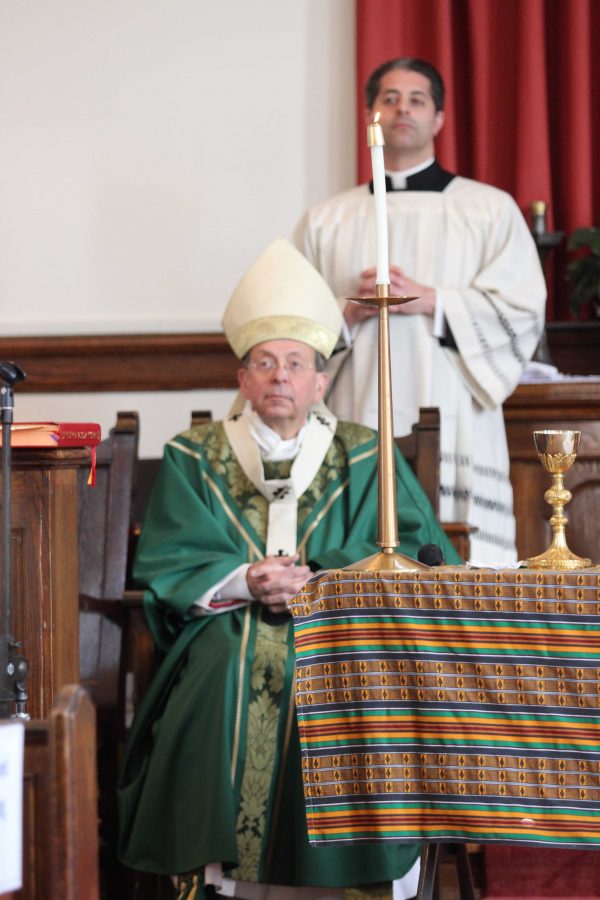 With Morgan State University celebrating its sesquicentennial this year, Sunday marked another historic first in the school’s long history. Archbishop of Baltimore, William Lori visited Morgan’s Chapel and performed the first mass by a Catholic prelate.

“I am told that I am the first Roman Catholic Archbishop to celebrate mass on this campus in its 150 year history,” said Lori. “Well, I have been the Archbishop of Baltimore less than five of those 150 years and I can promise you this, I won’t wait another 150 years to visit again.”

The service was a traditional Catholic mass that included the Archbishop’s vestments and mitre, a bishop’s signature hat. Lori touched on many relevant issues during the homily portion of the mass.

“He [Jesus] tells us that worrying does not add a single moment to our lives. He even tells us not to worry about tomorrow, and who of us in this chapel isn’t a little bit worried about today and about tomorrow,” said the Archbishop.

He also honored black Catholic history with a lesson and a tribute to the Oblate Sisters of Providence, the first Roman Catholic Sisterhood established by women of African descent.

“I think of the brave and loving witness of Mother Mary Elizabeth Lange, a pioneer in the education of African American young people,” Lori said. “Thanks to her leadership St. Frances Academy (Baltimore) was founded, and in 1829 she founded the Oblate Sisters of Providence.”

There were eight sisters that represented the group which currently has over seventy members in areas like Baltimore, Miami, Buffalo and Costa Rica. They were joined by many faculty and administration including provost Gloria Gibson. Student turnout was not as strong as expected, but the chapel was far from empty.

“He had a really good message and I took in every word” said freshman Chinenye Okeke, a practicing catholic. “I’m not sure what happened but I was disappointed with student turnout”.

The event was followed by a luncheon in the students center’s Calvin & Tina Tyler Ballroom. Guest were entertained with a skit performed by five local catholic school children and given chance to speak with the Archbishop and the sisters.

“This experience was a joy to me that I will always remember, and will continue to give me the courage to challenge myself to continue my work for the Lord.” said sister Anthonia of the Oblate Sisters.

“I had a wonderful time worshiping with my brothers and sisters in the Lord”, said sophomore Jada Brown,” I would like to go to another kind of event like this.”

This event was coordinated by the Morgan Chapel and the division of Research and Economic Development. Rev. Bernard Keels and Victor McCrary were the main organizers while Father Louis Bianco and Deacon Wardell Barksdale helped the Archbishop conduct mass. There are even talks about continuing this relationship with the Roman Catholic church and having another event next year.

“We have a welcoming environment for all to worship safely and have an open conversation, and I hope that Morgan can be seen as a beacon of diversity and compassion in this time of turbulent waters”, said Dr. McCrary.