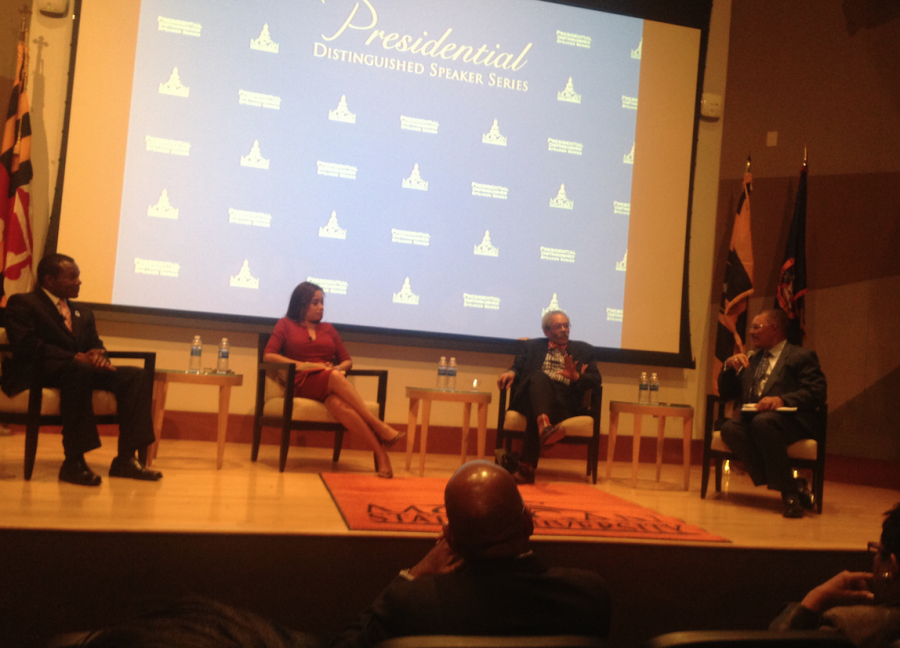 Following recent deaths from police brutality and with concerns for black communities under the reign of president-elect Donald Trump, Morgan State University concludes their Presidential Distinguished Speaker series for 2016 by discussing policing in black communities.

“We do hope the strategists discussed by the incredible panelists will contribute to our understanding and eventually improving the relationships between blacks and police here in Baltimore and nationwide,” said David Wilson, Morgan State president.

Moderator, DeWayne Wickham, dean of the School of Global Journalism & Communication, opened the discussion with a question regarding the characterization of black neighborhoods being treated as “occupied territory.”

Bell recalled a time when the community and policy actually cooperated together.

“In Baltimore, 50 years ago, you had a situation where the community consisted of everyone in the community was right there in the same place; preachers, doctors, lawyers, everybody was there.” said Bell. “There was a community feel about it and that community feel meant that people got along a little bit better and so you didn’t see that kind of reaction.”

Hostin pointed out the “blue wall of silence” as a cause of the lack of trust between police and the community.

“People will not come forward and point out the bad apples because I do agree that 99 percent of the police officers have a really difficult job and they’re trying to do their job to the best of their abilities,” said Hostin, “The View” cast member. But they will not break ranks and point the bad apples out. It’s about accountability.”

Tarrant offered insight on how things have changed within the force and problems they face.

“It takes a lot to change not only policy and law but also to change policing. The challenge becomes, as our societies and as our communities change, there is a lag between training and education of law enforcement across this country,” said Tarrant, president of the National Organization of Black Law Enforcement (NOBLE).

“Policing in this country started with actually hunting down slaves and returning missing property. That’s not to say that we can’t transition from our nation’s history to police service and that’s what we’re looking at when we start talking about change in law enforcement,” Tarrant added.

With president-elect, Trump, about to make his way into the White House, there are also concerns of his stance on enforcing the stop and frisk policy.

“[Rudolph] Giuliani, who has [Trump’s] ear, who may be the Attorney General if he’s up for it, has indicated that he wants stop and frisk to be this national program,” said Hostin. “Stop and frisk is constitutional but the way that it was implemented in New York was found not to be constitutional because it was really racial profiling with police power.”

“You can’t have community trust and stop and frisk,” said Tarrant.

The audience seemed to be focused on Tarrant during to Q & A to get a deeper insight on policing by asking questions regarding mass incarceration, mental health, body cameras and private prisons.

Each panelist was presented with an award, by Wilson, for speaking in the series.

The Presidential Distinguished Speaker series will continue Spring 2017 semester. According to Wilson, the schedule will be announced at the end of this semester.