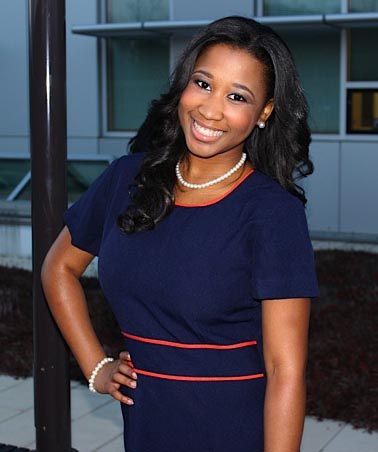 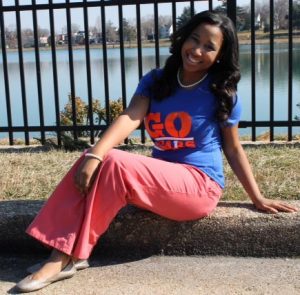 Morgan junior and broadcast journalism major Briana Lynn is the only candidate running for Miss Senior. Despite this, she intends to keep campaigning to show the class of 2014 why she is worth voting for.

Lynn continues to push her platform, “Dreams to Reality (DTRL),” an agenda to steer seniors toward their dream career and prepare them for life after college.

At the end of her sophomore year, Lynn wondered if she would return to Morgan. “I felt like Morgan wasn’t going to prepare me and I [wouldn’t] have enough experience when I graduate,” she says. Yet with her family’s strong history at Morgan and the success they had in their work lives, she decided to stay and help herself and peers advance at Morgan. “I wanted to help implant stuff and put programs and different things to make sure that our seniors at least feel at ease or feel prepared enough to go out into the economy,” she says. She wants to see her classmates “get a job and compete against someone who has a degree from George Washington or John Hopkins and feel comfortable.”

Last year, Lynn was campaign manager for current Miss Senior Trinette Gross, her best friend, roommate and sorority sister. Watching her fulfill the role inspired Lynn. “I saw her drive and she still continues to uphold that while she’s Miss Senior,” she says. “I said, ‘Wow, I want to do that.’”

This year, Gross is Lynn’s campaign manager. “It’s definitely an eye-opening experience. I get to see what I put her through as far as stress and friendship,” says Gross. “The idea of Lynn running for Miss Senior next never came up in their conversation. “But I’m happy to say that I can pass my crown to her,” she continues. “I wouldn’t have it any other way.”

Initially, Lynn was under the assumption that two other women would be running for Miss Senior alongside her. “I’m actually disappointed because I was ready for the competition,” she says. “My team was just like gladiators in suits—they were ready for competition.”

Nonetheless Lynn and her campaign team continue to promote her platform as if there were running mates. Her team is still amped to spread awareness of DTRL. “I want people to know she will put the time in necessary to prove that she’s qualified for the position,” says Jarrett Raghnal, a junior broadcast major who is a part of Lynn’s campaign team. “I believe in what she has to say and her ideas, she’s moved me.”

Aside from traditional campaign strategies like posters and giving out candy, Lynn has created a photo challenge on instagram. For 16 days, participants post a photo that goes along with the theme of the day. Some of Lynn’s themes include dream career, role models and Morgan pride.

Lynn does not want her peers to believe that with her automatic title as Miss Senior that operation DTRL is over. “I’m going to continue to talk to people who I don’t know so I can get to know them and they can trust me, because I will be their Miss Senior,” she said. “I want to have that relationship established before inauguration happens or the fall comes around.”