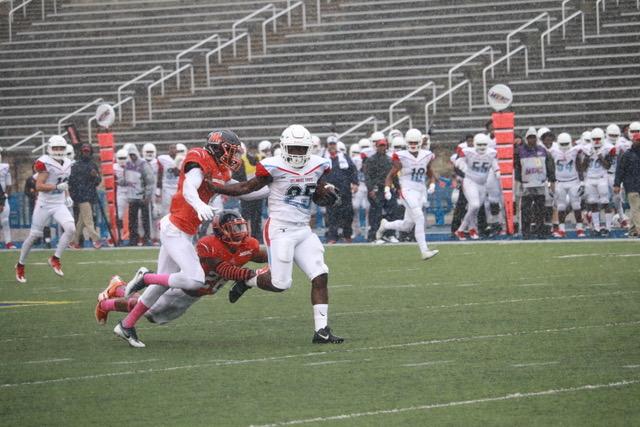 Senior receiver Ricky Fisk set the tone for the Bears with a huge 44-yard reception from Andrews which led to a 12-yard touchdown pass to redshirt junior receiver Amonta Poteat. The defense for the Bears played exceptionally well, forcing the Hornets’ quarterback into throwing tough passes and ending plays in the backfield.

“We had to put pressure on them,” said junior defensive lineman Jai Franklin. “The defense was very big; we set the tone, we set the tempo, every week [and] every down. If we bring that tenacity, we will be straight every week in and week out.”

The Hornets started off the second quarter with a 7-6 lead and a 44-yard run from running back Mike Waters following a Bears punt. The Bears’ defense had a successfully stifled the drive, holding Delaware State to a field goal to give the Hornets a 10-6 lead.

When the Bears went back

on offense, graduate quarterback Chris Andrews found a wide open senior Thomas Martin for a 25-yard touchdown pass which was followed by a successful the two-point conversion. Going into halftime, the Bears held the lead once again, 14-10.

“We made some mistakes, had way too many turnovers and way too many penalties throughout the course of the game,” said interim head coach Fred Farrier. “We just have to be more discipline and fundamentally sound and that’s something I have to fix as a head coach.”

Morgan attempted to keep up the offensive intensity in the 3rd quarter with catch by senior receiver Ladarious Spearman, breaking tackles and getting to the Hornets’ 35-yard line. However, the Bears could not capitalize with a touchdown on that drive or the remainder of the game. Sophomore Alex Raya made his final two field goal attempts of the helping the Bears hold off the Hornets’ comeback attempt.

“The defense played outstanding, they really locked in the second half on what the other team was doing,” said Farrier. “We had a number of three-and-outs, shutting down their run game and forcing them to throw the ball which their quarterback wasn’t very comfortable throwing it.”