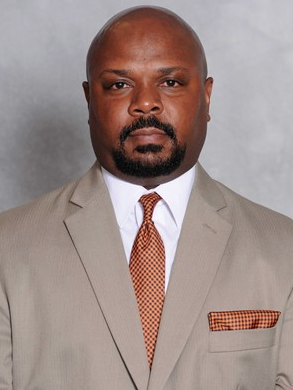 When former head coach Lee Hull was hired to take over the Morgan State University football team in 2014, the mantra his campaign rallied behind was “A New Regime.”

Just over two years after his hiring, Hull accepted an offer as the wide receivers’ coach for the Indianapolis Colts, presumably ending the “new regime” much earlier than anticipated and leaving Morgan State without a head coach in the middle of recruiting season.

Having served a series of head and assistant coach stints in his career, Farrier was at the head of Renssalaer Polytechnic Institute’s program when he decided to join the staff at Morgan State.

“When Lee Hull came to Morgan, he called me and asked if I would be interested in coming with him as his offensive coordinator and his right hand man,” said Farrier.

Born in Cleveland, Ohio, Farrier has been an athlete – and a scholar – his entire life.

“Grades were always important; my mom was home everyday making sure we had something to eat when we came in from school, and making sure as soon as we got done eating, we were doing homework,” said Farrier. “We couldn’t do anything until homework assignments were done.”

His mother worked as a nightclub manager, while his father was a police officer who helped start the Police Athletic League in the city. When his mother died during the spring of his sophomore year of high school, Farrier and his younger brother vowed to excel athletically, academically and in character to honor her.

Farrier’s successes on the basketball and football teams in high school, including being the captain on both squads his senior year, landed him an opportunity to play both at the College of the Holy Cross in Massachusetts. Even through the rigors of two sports – although he would give up basketball to focus on football – Farrier graduated with a double degree in accounting and economics.

“I always dreamed of being a corporate CEO running my own Fortune 500 company,” he said.

After spending a few years working for PricewaterhouseCoopers, formerly Pricewaterhouse, Farrier couldn’t resist the urge to return to athletics from a friend who was an assistant coach at Michigan State University at the time.

There in East Lansing, Mich., is where Farrier’s coaching career began. On the cusp of a promotion in the accounting world, a young Farrier left behind his former career to join the Spartan staff as a graduate assistant.

“If the football thing didn’t work out, I felt I could always go back to accounting,” said Farrier.

At each of Farrier’s coaching stops, he found success. He was on the Saginaw Valley State University staff that earned their first ever playoff berth and helped Shaw University win a Pioneer bowl as the associate head coach. In his first head-coaching gig at Kentucky State University, he won more games in his first two seasons than any of the previous coaches before posting two consecutive 3-8 seasons that lead to him being replaced.

“I was out of football for a little while,” he said. “[I] did some organizational development stuff for the state of Kentucky, did some commentating on television which is what football coaches do when they get fired.”

It was during that time off the field that Farrier credited with helping him rekindle his fire to be a coach, leading him to RPI and eventually Morgan State.

In his first year with the Bears, Farrier coached the second ranked offense in the MEAC and the conference’s leading rusher, running back Herb Walker Jr. When the team underperformed in 2015 after making the Football Championship Subdivision playoffs the year before, Farrier still kept the offense in upper half of the conference.

His experiences and personal success at Morgan State made the choice to name him interim head coach an easy one for outgoing athletic director Floyd Kerr.

“I have high confidence in him that he can keep the program going in the direction that it’s going,” said Kerr. “He’s very well organized and pays attention to detail and he spends time with the student athletes; counseling them, guiding them and of course teaching them football and the game of life.”

Kerr also cited a desire to maintain a level of continuity within the program as a motivating factor in elevating Farrier rather than bringing in a new coach. For players such as junior wide receiver Landen Malbrough, keeping the hiring in house is a major confidence booster.

“He is very energetic and he genuinely cares about all of his players and coaches,” Malbrough said. “He’s been with us to war, so I definitely think he’s a fitting leader to bring us to battle every Saturday.”

As he takes control of a highly storied program, Farrier is confident that he and the team will have the support of the entire Morgan State community.

“This is a place where the students and the administration and the people who have graduated from here are really passionate about this place,” he said. “When you see the students walking around here, most of them wear Morgan State gear. It’s really exciting to see the passion and the love that people have for Morgan State University.”

“That support will be a necessity for Farrier, who’s taking on a new set of responsibilities that he hasn’t dealt with in years. As an offensive coordinator, his sphere of influence was limited to his portion of the team. Now, “every problem walks through my door,” he said. Whether the issue is on the field or off, they all will fall back on Farrier.

“As a head coach, there’s just much more responsibilities,” Farrier said. “Now, in that same time frame that I would be here, I have 15 things to do instead of three things to do.”

Farrier is just as excited now, for the future, as he was when he first joined the staff under Hull if not more.

“We want to put a product on the field that, if kickoff is at one o’clock, the fans want to be there at 12:30 because they don’t want to miss anything,” said Farrier.