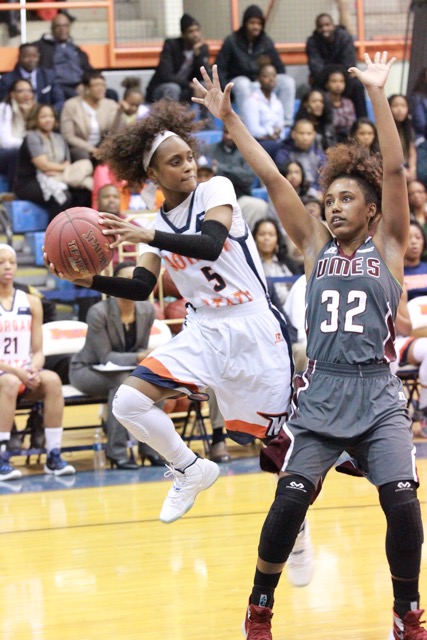 The Morgan State Women’s Basketball team ended the regular season with a home loss to University of Maryland Eastern Shore, 50-42.

In what turned out to be a very defensive oriented showdown on Senior Night for the Bears, both teams shot under 25 percent in the first half and the score at halftime was just 20-18 in favor of Morgan.

Even in the second half, UMES struggled to get baskets, but they got to the free throw line constantly, finishing with 23 attempts and making 13 of them. The Lady Bears, on the other hand, had very few free-throw opportunities, going 3-6 for the evening. They settled for a lot of jump shots, much to the dismay of head coach Donald Beasley.

“I can’t get anybody to attack the basket; we shot six free throws,” a frustrated Beasley said after the game. “They’re young sophomores, they had some success and so they thought they’re better than what they were.”

“I definitely think we settled on taking jump shots just because that’s the easy way out,” said senior Simone Sampson. “But that’s something that we have to change going into the postseason.”

The Lady Bears also struggled with protecting the basketball, giving up seventeen points off of turnovers and only scoring seven.

“In the first half I think we took advantage of [UMES’s] turnovers and our defense was a little tighter,” senior forward Dinah Jones said. “In the second half, I felt like we had too many turnovers, and we didn’t capitalize off of our steals,”

The loss is the third straight by the Lady Bears and drops their final record to 12-16 and 10-6 in the MEAC as they get set to begin the conference tournament against North Carolina Central University on March 7.

“I think we just have to trust each other, and I think that’s one of our aspects we do really well,” said Sampson.