Chick-Fil-A comes to Morgan, but at a price 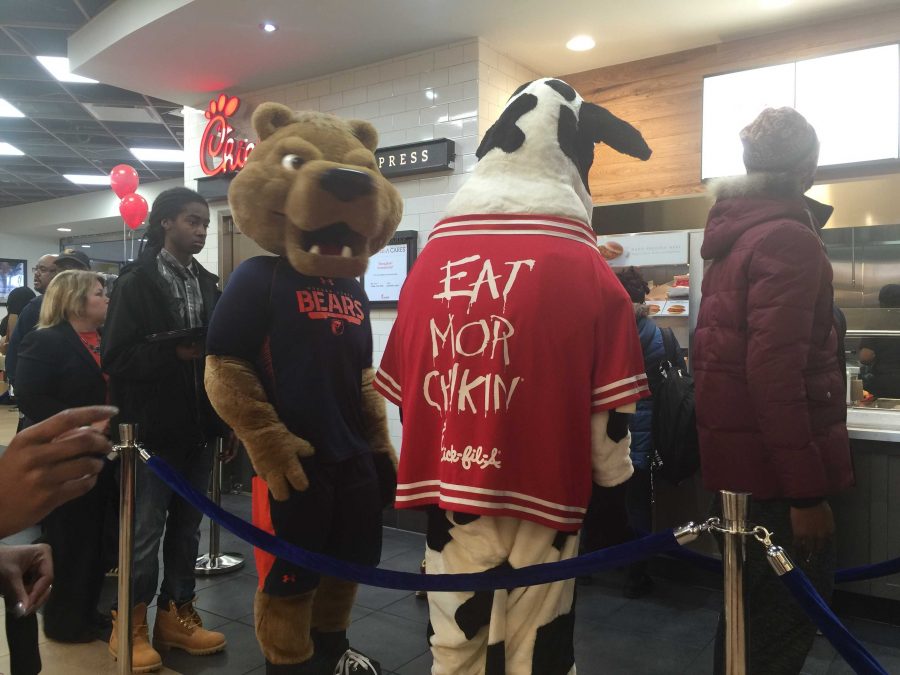 Benny the Bear and the Chicken the Chick-Fil-A cow were present at the opening of Chick-Fil-A in the University Student Center Food Court. Photo by Benjamin McKnight III

The reopening of the food court in the University Student Center also marked the grand opening of the campus’ new Chick-Fil-A kiosk., Tuesday morning.

For some students, Chick-Fil-A’s opening was heaven-sent. “I was praying for it, and God answered my prayers,” said freshman Computer Science major Ibukun Oladunjoye. Festivities included an appearance

by ‘Benny the Bear’, the Chick-Fil-A Cow, the university’s Royal Court and campus president David Wilson. Additionally, 50 Chick-Fil-A cows were hidden around campus for students to find and redeem for a free chicken sandwich, according to Thompson Hospitality’s Regional Marketing Director Elizabeth Daugherty.

The food court closed on Nov. 23 to make the renovations for Chick-Fil-A, along with other modifications to the already existing food stations, a promise made by Wilson at last September’s town hall.

With all the fanfare surrounding the opening, Chick-Fil-A ran into a few issues. The high anticipation combined with a failure in the food court’s credit card readers that limited customers to cash or Bear Card payments slowed down the process. Sophomore Social Work major Sydne Hill said she waited in line for almost 45 minutes for her food. “Maybe if the credit card machine was working, things could’ve moved [more swiftly],” Hill said.

The Chick-Fil-A on campus does not accept student meal equivalency payment from meal plans, unlike some other schools that have the restaurant on campus such as Norfolk State University. “With Chick-Fil-A, we pay a royalty for the franchise,” said Daugherty.

“It sucks, it really sucks,” said Oladunjoye. “College diet, not a lot of money, you’d think they would compensate like that.”