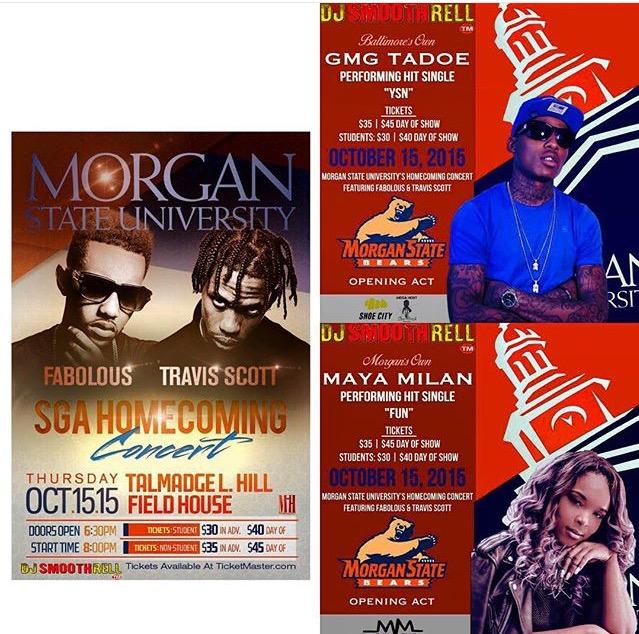 Update October 15, 11:04 am: Travis Scott has pulled out of the concert lineup as announced by the UMOJA Council’s Twitter. Rick Ross will be Scott’s replacement for the evening. Refunds will be issued from the Student Center box office for those who no longer wish to attend.

As Morgan State University prepares for their homecoming concert, there is a riff amongst concertgoers. The two headlining performers, Travis Scott and Fabolous are very different in styles and audiences – many wonder what kind of show they are in for.

Houston native Travis Scott is at the breaking point of his career – becoming almost an overnight sensation since the release of his acclaimed 2014 mixtape “Days before Rodeo”. He followed this up with the release of his debut album “Rodeo”, selling over 90k copies first week including streams. Scott is the hip-hop version of legendary Guns N’ Roses vocalist Axl Rose – a loose cannon known to fight anyone that rubs him wrong.

There are tons of videos of Scott getting into verbal and physical confrontations both on and off stage. Despite this, Scott is revered for his live performances – often enticing riots with his enraged sets. A Travis Scott show is the perfect marriage of hipsters and street dwellers, which come prepared to be drenched in sweat – and possibly blood at the end of the night.

Brooklyn native Fabolous is a veteran in every sense of the word – managing to remain relevant in the hip-hop world for nearly two decades. Born John David Jackson, the 37-year-old has managed to garner several platinum and gold albums and a slew of chart-topping hits.

The artist known as “Loso” is as coveted for his lyrical ability as he is for his fashion sense. Despite his popularity both mainstream and underground, his commercial success has been on the decline.

Morgan State students have been very vocal about the lineup, and what kind of show they expect on Thursday.

“I feel like it’s a very disappointing lineup. Nobody even knows Travis Scott. Why do we have to pay so much?” said graduate student Donika Gibson.

“The lineup is terrible. I like him as an artist, but I can’t turn up to Fabolous”, said senior Dominic Rowe.

Some students are skipping the concert altogether, opting to save their money for other events during homecoming week.

“I don’t really care for Fabolous at all. The only thing I’m going to is club Paparazzi after the game” said Senior Ikea Williams.

Not everyone feels ill about the concert, many like the contrast of the two artists.

“Fabolous is a legend, and Travis Scott has the best performances in rap. I’m coming from home for that” said alumni Robert Okosi.

With homecoming season in full effect, concert lineups are being announced at schools around the country. Any exclusivity Morgan thought it had is out the window, as Fabolous is also booked to perform at Norfolk State University.

Despite the campus being split on opinions about the concert, fans will get a treat to hear two established artists live that both have a track record for putting on a show.

With a student body over 8000, it’s not easy to make everyone happy. But with Fabolous and Travis Scott, students are getting their money’s worth. Tickets are available now for students at $30, and $40 the day of the show in the student center and online.