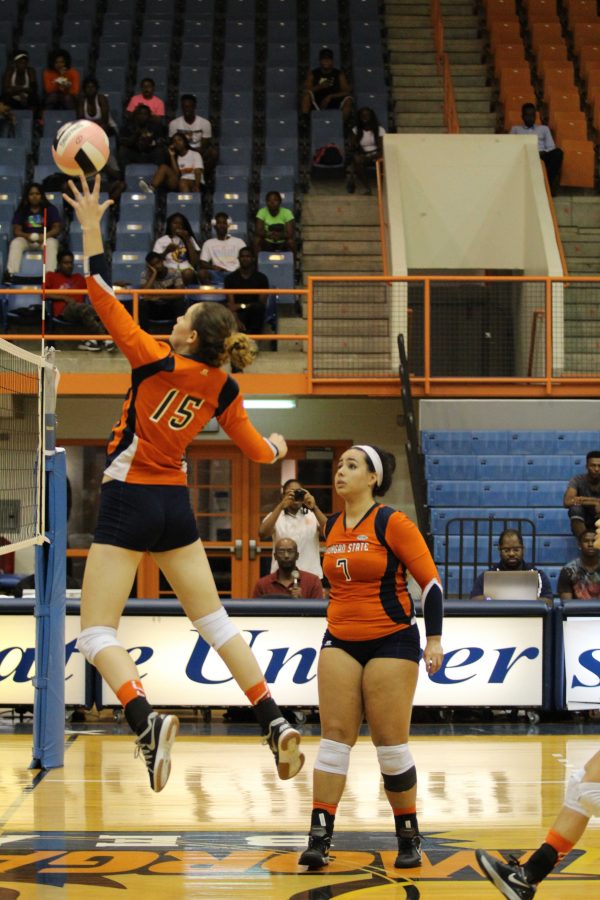 For a team such as the Lady Bears volleyball squad, the early parts of the season are often the most challenging. Beginning another campaign with a highly competitive non-conference schedule, the Lady Bears held their first home contest of the season against the visiting Georgetown Hoyas on Sept. 8.

With both teams having similar records, the Lady Bears hoped to steal a win before preparing for their next tournament this coming weekend. The Hoyas had other plans, overwhelming the Lady Bears early on and holding off a late rally to win the match 3-0.

The first set of the night was relatively close, with the Lady Bears falling 25-20. “I think we didn’t have enough offense for us to pull out that set,” said sophomore Keana Browne. However, their youth showed in the second set as a number of defensive lapses resulted in them losing 25-16. “We have a few young players that we need to try to rely on,” said Coach Ramona Riley-Bozier. Senior Arianna Hayden added, “We stopped being aggressive. We weren’t as focused and went away from the things that worked for us.”

In the third set, the Lady Bears showed glimpses of promise, capturing a late lead after staying within three points or less for most of the game. “We were playing some solid defense,” said Browne. “I think we really wanted to win that set.” The Lady Bears went ahead 23-20 late in the set behind impressive efforts by Browne and Hayden, needing only two more points to keep the match going. At that point, though, they stalled out, allowing Georgetown to score five consecutive points to end the night. “Because we were so excited and aggressive, we started losing track and focus,” said Browne.

Even with the shutout, Bozier was able to pick up a few positives from her squad’s match. “Honestly, there were some really great moments that we played some pretty good backroad defense,” she said. Moving forward, Bozier hopes that the rest of the Lady Bears’ non-conference schedule builds the confidence and cohesion of the team, especially the younger players. “It also gives us a chance to move some people around to some different positions and see what’s gonna be best come conference play,” said Bozier.

At the time of publication, the Lady Bears went 1-2 at the Maddie Bingaman Tournament hosted by University of Maryland Baltimore County, earning their sole win against Fordham.