‘Home’ Brings Race and Individuality to the Forefront 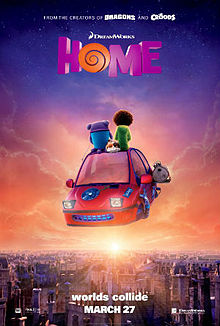 Since its March 27 release, the highly anticipated DreamWorks film “Home” has brought in $54.1 million.  The main character is a young woman of color, a first for a DreamWorks animated film.

“So you’re mad-sad?” Oh asked, in a confused epiphany after finally understanding the complexity of the human race, represented by a young girl named Gratuity aka “Tip.”

The movie followed an ET Boov named Oh who broke out of his traditional shell and found himself on an adventurous encounter with Tip.

Oh came from a nation of aliens who were known for giving up and running away if the probability of success was 50 percent or less. This attitude made them judge a book by its cover and judge things from a stereotypical point of view.

Oh’s species of aliens came to earth to live while they were on the run from a different alien life form. They came with the idea that humans were backwards babies and inferior, so they relocated all of the humans to a different continent and began to live in complete separation.

The story unfolds as Oh tries to find a sense of belonging among his alien race and comes across Tip after running from a huge mistake.

Color played a huge role in the overall message of the movie. Oh and the Boovs are purple aliens whose skin color changed depending on their emotions. Due to the nature of their leader, they stayed purple out of fear of being unique or courageous.

Tip’s experiences and personality resembled an angry black woman or as Oh interpreted it, a mad-sad girl.

While the two spend time together on their mission to Paris, Tip helps Oh explore his colorful emotions and grasp the misunderstood passionate nature of a woman of color, as she slowly opens up to him.

The colorfulness of the characters development tastefully resembled realistic traditional ideas and cultures that were changed by true knowledge from the integration of different life forms.

The story line was one of the best emotional roller-coaster rides that both tickled your stomach and made you tear up due to high climaxes and steep slopes.

By the end of this emotional reign of awws, tears and laughs, several life lessons are realized. The movie reminds viewers not to judge a book by its cover but, it also sheds light on the misunderstood emotions and culture of people of color. It’s message? Not having a sense or place of belonging reasonably makes folks “mad-sad.”

“Home,” directed by Tim Johnson and distributed by 20th Century Fox, is currently in theaters.