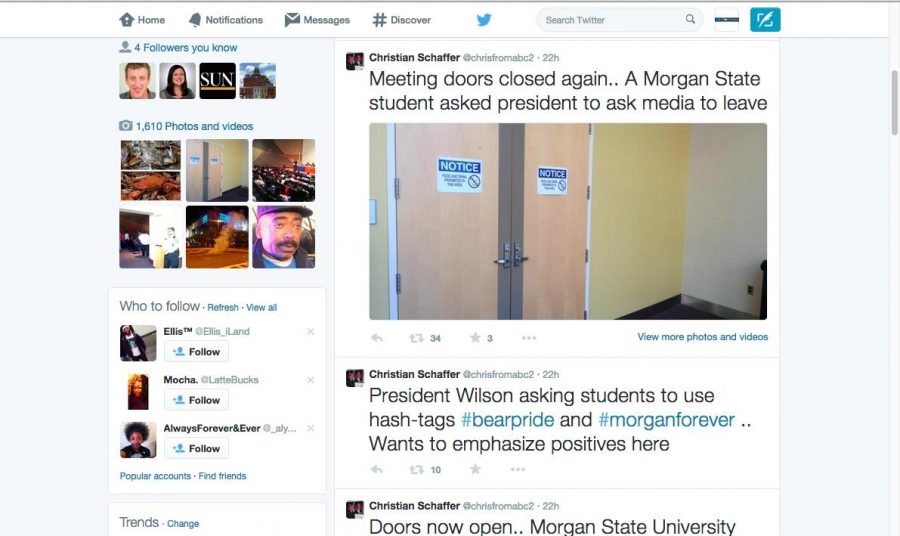 Christian Schaffer, a reporter for ABC 2 News in Baltimore, posted on his Twitter account images of the Student Center Theater’s closed doors and said, “Meeting doors closed again…A Morgan State student asked president to ask media to leave.” Schaffer could not be reached for comment.

Student Kyree West said during the town hall meeting, “I think that these cameras shouldn’t be here. This is a community. I don’t think that we need any more news coverage.”

West, a 22-year-old business administration senior, later defended his comments. “We have media outlets here at Morgan State University,” he said in an interview with the Spokesman. “I think they are more than qualified to do [the job]. And if you give students that opportunity, they’ll tell the story like it’s supposed to be told, and not try to twist the words so that it makes the story juicier or makes it more compelling to the audience.”

Morgan’s PR director, Clinton Coleman, confirmed not only that reporters and cameramen were asked to leave, but that it was he who asked them both before and after the comments.

“All I needed to hear was the students wanted them to leave,” Coleman said. “Dr. Wilson saw me asking them to leave, and then said I was handling it.”

Coleman said that he asked the reporters to leave because students “wanted to have an intimate sort of family discussion.”

“It initially was to be a closed-door meeting,” Coleman added. “The meeting initially was scheduled among student leadership…but that was scheduled prior to yesterday afternoon’s events. So once that incident occurred, the president decided to make it sort of a town hall-style meeting. And then the intent changed.”

Maryland’s Open Meetings Act was created to “increase the public’s faith in government, ensure accountability of government to the public, and enhance the public’s ability to participate effectively in our democracy,” according to the State Attorney General’s website. There are exceptions, but they are very clearly proscribed. Discussions about personnel matters, for example, would take place behind closed doors.

Coleman defended his position. “It was clear that the students wanted to be able to make comments without being shown on TV. And they have that right.”