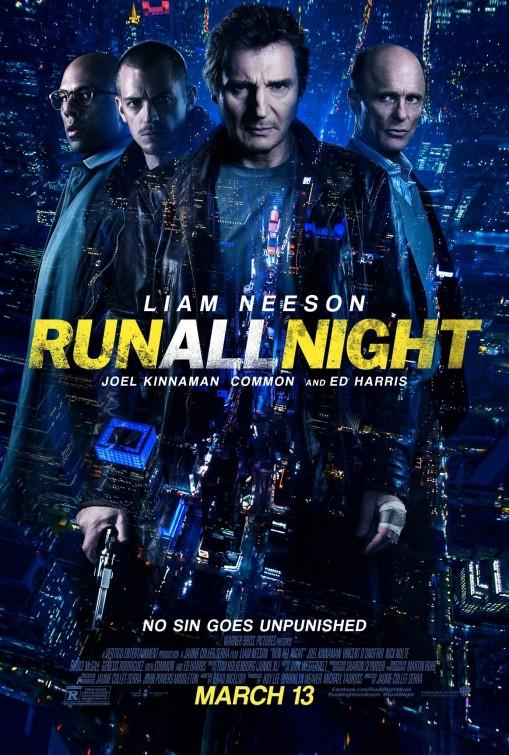 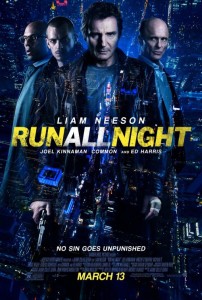 If there’s any joke subgenre of film that should be an actual thing, it’s the subgenre of “Liam Neeson Kills Things.” Since 2008, the 62-year-old Irish actor, known for such movies as Schindler’s List and Michael Collins, has reinvented himself as an action-movie star, appearing in no less than 10 films that have, at one point or another, added to his cinematic body count.

This year alone, Neeson added two movies to that list – Taken 3, the latest in his hit franchise that opened in January to less-than-encouraging reviews, and Run All Night, this week’s new opening that should fare a good deal better.

Run All Night is a crime-thriller tale centered around Jimmy Conlon (Neeson), a mob enforcer and hitman whose violent past has turned him into an alcoholic and estranged him from his more straight-laced son, Michael (Joel Kinnaman). The one strong relationship he has left – with mob boss Shawn McGuire (Ed Harris) – quickly disintegrates when Jimmy is forced to kill Shawn’s son after he comes to kill Michael. Framed for the son’s misdeeds and pursued by corrupt cops, Shawn’s henchmen and a professional assassin (Common), Jimmy and Michael must outrun and outlast all of them long enough to set things right.

As thrillers go, Run All Night is fairly standard. Viewers who have seen at least one story of a failed parent giving his all to protect an unfortunate and slightly unappreciative child will have most of the salient points down pat here. What makes this movie work, though, is the acting. The cast is engaging throughout, and gives it vital life. Neeson and Harris are the two big draws; though this isn’t either man’s finest hour by any means, watching the two veterans act through their respective moments of guilt and fury is a wonderful way to spend almost two hours. A series of scenes – including a mid-movie verbal showdown at a jazzed-up old hangout – really allow the viewers to see their relationship dissolve before their eyes. And of course, Neeson gets more than a few chances to show why he’s currently Hollywood’s favorite senior tough guy.

On the supporting side, Kinnaman is solid as Michael, effectively portraying his struggle of a man suddenly swept up in a life both father and son agree he shouldn’t be a part of. Common gets a significantly less meaty part as Mr. Price; that said, he’s pretty fun to watch as an implacable killer who will stop at nothing to get the job done. And Vincent D’Onofrio gets a chance to channel his inner Robert Goren as a world-weary NYPD detective chasing after the Conlons. Everyone else is there as bit players, pretty much, including Holt McCallany and Bruce McGill, who really stress the “character actor” part of their job description and get only a couple of scenes combined.

Director Jaume Collet-Serra, who previously worked with Neeson on 2011’s Unknown and 2014’s Non-Stop, gets another chance to do so, and clearly enjoys it. With that in mind, though, he and cinematographer Martin Ruhe make some interesting choices to transition from scene to scene; most of the first half is peppered with zoom-outs and extreme close-ups from one location to the other. Mostly, this works, but it gives a little too much of a video-game feeling to things, as if the next scene was loading up. Given the overall tone of the movie, it’s a bit jarring at times. Ultimately though, it’s a minor complaint.

So, where would Run All Night rank in the action sub-genre of “Liam Neeson Kills Things?” It would easily be one of the better examples. A strong, involving story and a cast that always gives the impression that they enjoy their work makes this a movie that viewers won’t be disappointed in running to see.

Run All Night, directed by Jaume Collet-Serra and distributed by Warner Bros. Pictures, is currently in theaters.