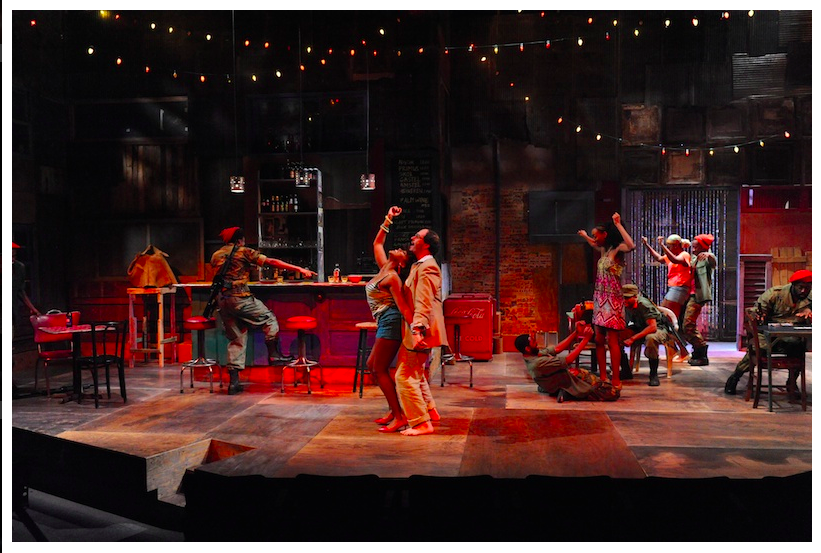 This month, Baltimore theaters are hosting two African-American written plays that differ wildly in subject matter and tone, but benefit greatly from strong and committed casts.

Ruined, written by Lynn Nottage, is the story of several women in the Democratic Republic of Congo who must eke out their survival at a Casablanca-esque brothel that serves multiple sides of a brutal civil war – none any better than the other.  Life at the brothel is soon upended by the arrival of two new women, Sophie (Zurin Villanueva) and Salima (Monique Ingram), who have been exiled from their village after being the victims of war rape.

The set design is simple, but effective, and works hand in hand with the cast to help pull the audience into the story.  And it is the cast of the play that, collectively, is the shining light of the entire production.  Villanueva, Ingram, and Jade Wheeler (who plays Josephina) bring life to their respective roles, playing them up with equal parts of charm and grace; Villanueva really stands out as Sophie through a pair of musical interludes, with a strong, silky voice that makes the audience feel for her that much more.

Dawn Ursula is also great as Mama Nadi, the brothel’s ruthlessly pragmatic owner and true lead character.  Ursula brings emotion and bravado to the role, effectively portraying her virtually nihilistic nature and sheer willingness to play both sides to her own benefit.  She also plays off of Jason B. McIntosh (who portrays Christian) very well, helping to lighten up the mood through the relationship between the brothel owner and the benevolent regular attempting to woo her.

It’s good that the cast is so strong, because the story needs the help.

The play’s subject matter and setting are so dark that one would expect the overall tone of the story to be distressingly – or even oppressively – bleak.  But Nottage defies this somewhat; humor, alternately light and dark, dots the story throughout, expressed mainly through the aforementioned relationship between Nadi and Christian.  In addition, things progress in such a conventionally Hollywood manner that some plot twists are telegraphed, almost blatantly.  That alone wouldn’t be an issue, but combined with the humor, it decreases the effectiveness of the subject matter significantly.  Too often, the play trends more towards comedy than the drama that it should be.

Ruined would likely work better as an HBO TV special of sorts, where the humor could be delivered with more subtlely and the more horrifying aspects of the setting – namely, the potential brutality that hangs over the women throughout the play – would have much more of an impact.  As a play, however, it lives and dies on the strength of its cast.  Fortunately, the cast is more than capable of giving it life.

Like Ruined, One Night In Miami deserves its’ own HBO special as well.  Unlike the former, however, the special that would focus on the latter could be a documentary of how something so entertaining and charming could come out of something so simple.

One Night In Miami, written by Kemp Powers, is a fictionalized account of the night of February 25, 1964, when Cassius Clay (later Muhammad Ali), newly crowned heavyweight champion of the world, opted to celebrate with friends Sam Cooke, Jim Brown, and Malcolm X at the Hampton House.  No official account exists of what happened in that motel room through the course of the night, and that is what this play seeks to explore and establish.  And the audience benefits for it.

This play is – summarized simply enough – a one hour and twenty minute master class in comedic timing.  It has its dramatic moments, as all four men get the chance to bring their own concerns and grievances to light throughout the play, and they do so effectively and enthrallingly.  But when they are not doing that, their banter is something to behold.  At one point, a tense moment between Cooke and Malcolm X leads to Brown asking Clay what’s on his mind.  Clay’s one-word response couldn’t possibly be reprinted here, but it easily brings the house down.

The cast is just brilliant.  Tory Andrus, Sullivan Jones, Grasan Kingsberry, and Esau Pritchett take hold of their respective roles and run with them admirably – they could and should form their own comedic quartet.  Jones is hilarious as the brash Clay, capturing the boxer’s persona perfectly and bringing welcome brevity to the play.  And Kingsberry shines as Cooke, especially during a flashback-like scene at a nightclub when he emulates Cooke almost perfectly, even jumping into the audience to further the effect.  Pritchett, as Brown, seems tailor-made for his role, as is Andrus as Malcolm X.

Because the play takes place almost entirely inside a hotel room, the set is extremely basic, but period accurate.  That said, One Night In Miami is not about the set.  Anyone that wants to go see this play will be going to see four extremely good actors portraying four extraordinary people.

Ruined, written by Lynn Nottage, is currently playing at the Everyman Theater Company on West Fayette Street until March 8.  One Night In Miami, written by Kemp Powers, is at Center Stage on North Calvert Street until February 22.